Add an Event
Newswire
Calendar
Features
Home
Donate
From the Open-Publishing Calendar
From the Open-Publishing Newswire
Indybay Feature
Publish to Newswire
Add an Event
Related Categories: California | Central Valley | U.S. | Environment & Forest Defense | Government & Elections | Labor & Workers
Groups Blast Farm Bureau for 'Scorched Earth' Policy on Shasta, Scott Rivers
by Dan Bacher
Friday May 28th, 2010 8:54 AM
“The Farm Bureau seems to have adopted a scorched-earth policy here,” said Glen Spain of the Pacific Coast Federation of Fishermen’s Associations (PCFFA), representing commercial fishermen devastated by recent salmon fishing closures. “Water is a public resource that also supports California’s valuable salmon fisheries and all the jobs those salmon support. It only makes sense for a public agency to keep track of the public’s water, and to take steps to minimize the impacts of water diversions on fisheries and other public resources.” 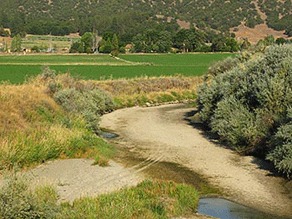 The water wars really heated up this week in both the Klamath River and Sacramento River watersheds as agribusiness interests continued their campaign to squeeze every drop of water they could out of two systems where native salmon populations are on the verge of extinction.

On Thursday, May 27, a broad coalition of conservationists, California Indian Tribes and commercial fishing groups slammed a California Farm Bureau attempt to block resource agency requests that irrigators report water use and potentially obtain permits to withdraw water from the Shasta and Scott rivers, two of the Klamath River's major tributaries.

“The Farm Bureau seems to have adopted a scorched-earth policy here,” said Glen Spain of the Pacific Coast Federation of Fishermen’s Associations (PCFFA), representing commercial fishermen devastated by recent salmon fishing closures. “Water is a public resource that also supports California’s valuable salmon fisheries and all the jobs those salmon support. It only makes sense for a public agency to keep track of the public’s water, and to take steps to minimize the impacts of water diversions on fisheries and other public resources.”

The Farm Bureau alleges in its lawsuit that the DFG recently reinterpreted a law enacted in 1961, in an attempt to create a “fundamental change” that would give it broad new authority to oversee water rights—a function already performed by a separate state agency, the State Water Resources Control Board. "The Department of Fish and Game began following the new interpretation," the Farm Bureau says, "as it pursued a recovery strategy for coho salmon in the two rivers, which are protected under the state Endangered Species Act."

“Farmers and ranchers understand that Fish and Game has a legitimate role to play in protecting fish, and the department already has many other ways to do that,” claimed Chris Scheuring, managing counsel of the California Farm Bureau Natural Resources and Environmental Division. “Farmers along the Scott and Shasta rivers have taken a number of steps to benefit the salmon. But we do not believe Fish and Game has blanket authority to regulate every farmer’s water rights, and that’s what it’s trying to do.”

Contrary to what the Farm Bureau claims, the DFG has the legal responsibility to stop the killing of endangered salmon and steelhead by the irrigators who drain a river, just as it has the responsibility to cite an angler for killing an endangered coho salmon. Unfortunately, while an angler who catches a coho salmon will have to pay a hefty fine for breaking the law, irrigators who kill coho salmon by dewatering a river have got off scott-free for years.

The Bureau’s action came a day after new court filings by the groups accusing the California Department of Fish and Game (DFG) under the Schwarzennegger administration of violating landmark state laws protecting struggling salmon in both watersheds.

The action also took place the same week that federal Judge Oliver Wanger in Fresno allowed the state and federal water projects to increase the pumping of Delta water to corporate agribusiness on the west side of the San Joaquin Valley, threatening imperiled Central Valley salmon and steelhead populations and Delta smelt. West Coast fishermen, shut out of fishing for the past two years altogether and granted a 2010 commercial fishery so tiny that most will simply sit it out, fear that Wanger's rulings on the salmon and Delta smelt biological opinions could be a serious disaster for the Sacramento River’s fall-run chinook salmon and other fish populations.

"Scientists have recently reported alarming declines of threatened coho populations in these two key salmon spawning tributaries of the Klamath River," according to a statement from the groups. "Last summer, the Scott and Shasta garnered headlines statewide after irrigation withdrawals caused record low flows and dewatered stretches of both rivers as thousands of salmon swam upriver to spawn."

Peer-reviewed science shows that steadily increasing irrigation withdrawals are largely to blame for no-flow and record low-flow conditions in these rivers. Despite the ongoing ecological collapse, water use along the two rivers has remained almost wholly unregulated due to "irrigator opposition and CDFG inaction," the groups stated.

“It’s disappointing that the Farm Bureau is opposing even the most minimal, initial efforts by CDFG to introduce some accountability for public resource use in these two watersheds,” said Erica Terence of Klamath Riverkeeper. “If we want to have any hope to reverse the decline in coho, we need to leave behind this kind of irresponsible opposition to any real resource management in the Shasta and Scott."

She added that "This sort of bullying is a big reason why the state has failed to limit the water diversions as well as the excessive, unregulated groundwater pumping that fragment salmon habitat, cause poor water quality, and block access to food sources for fish.”

Only eighty-one coho returned to the Scott River, while in the Shasta a mere nine coho returned, reportedly all of them male, according to preliminary data from video fish counts on the Scott and Shasta rivers conducted by the DFG in 2009.

"Biologists also reported that two out of thee classes of coho in the Shasta River are functionally extinct," the groups said. "These devastatingly low returns continue an alarming population decline in watersheds that once provided some of the best habitat anywhere in the Klamath Basin."

In April, DFG staff began to rescue what few endangered coho salmon could still be found in the Scott and Shasta, transplanting them dozens of miles down the mainstem Klamath River to supposed safety, since water conditions on the two rivers are expected to become so inhospitable to salmon this year.

The coalition, represented by Earthjustice, went to court last year to oppose the DFG’s efforts to issue Watershed-Wide Incidental Take Permits (ITPs) for the Scott and Shasta. This week, the groups added new complaints in the case, alleging the agency violated the California Endangered Species Act (CESA) and California Environmental Quality Act (CEQA) while undertaking the controversial program providing blanket permits for agricultural practices that kill salmon or destroy habitat in these watersheds.

The groups said the ITPs at issue would provide "legal cover" for continued de-watering of the Scott and Shasta while allowing illegal dams, water withdrawals, and livestock grazing in stream beds to continue unchecked. ITPs for coho salmon are required under law because the species is listed as threatened with extinction. Coho populations in the Klamath Basin have declined to approximately one to two percent of their historic abundance, with the Scott and Shasta rivers among their most important remaining habitat.

“The DFG’s findings that these permits will not jeopardize the continued existence of coho salmon lack any rational support,” said Wendy Park, attorney for Earthjustice. “And when new information arose concerning the population and viability of coho within these areas, the DFG failed to prepare a supplemental analysis taking the new information into account. We believe both of these actions violated the law.”

A 2004 National Academy of Sciences report suggested that curbing agricultural water use and habitat degradation in the Scott and Shasta watersheds are critical for restoring Klamath River coho salmon. The Shasta River was once the most productive salmon stream, for its size, in the state of California.

“Instead of acting constructively to address the unsustainable practices driving coho to extinction, the Farm Bureau is just trying to stall and tie things up with lawsuits,” said Scott Greacen of the Environmental Protection Information Center (EPIC). “They are playing games while our salmon disappear.”

"As we watch one of the world's most important marine ecosystems being destroyed in the Gulf of Mexico by the BP Deepwater Horizon oil spill, it behooves us to redouble our efforts to protect our own aquatic species here on the North Coast," said King. "These groups are doing just that, working to save the last salmon runs on the Scott and Shasta Rivers, critical anadromous tributaries to the Klamath."

I completely agree with King. Everybody should support the efforts of these groups to save coho salmon, steelhead and chinook salmon from becoming extinct on the Shasta and Scott rivers because of inaction by the Obama and Schwarzenegger administrations. Earthjustice attorneys have continually stood up for conservationists, fishermen and Indian Tribes in defending our public trust waters against attacks by agribusiness and other corporate interests.

While Governor Arnold Schwarzenegger, has issued press release after press release falsely portraying him as the "Green Governor" for his "green energy" and carbon credit trading scams, he has allowed irrigators to dewater the Shasta and Scott rivers, threatening the very existence of the river's remaining salmon runs.

He has campaigned for the peripheral canal around the Delta, a $23 billion to $53.8 billion fiasco that is expected to lead to the extinction of Central Valley salmon and Delta fish populations.

He has fast-tracked his Marine Life "Protection" Act (MLPA) Initiative, a process infested with conflicts of interests, mission creep and corruption of the democratic process that does nothing to protect the ocean from water pollution, oil drilling and habitat destruction.

Yesterday the Central Valley Regional Water Quality Control Board under the Schwarzenegger administration, in spite of strong opposition by environmental and fishing groups, voted unanimously to grant a 10 year extension of a selenium pollution waiver to west side San Joaquin Valley growers in the Grasslands Water District.

Also yesterday, the DFG, under pressure from the "Green Governor," issued a determination under the California Endangered Species Act (CESA) to allow the State Water Project (SWP) to kill more threatened and endangered salmon and steelhead.

There is no doubt that Schwarzenegger is the worst Governor for fish and the environment in California history and has, like the Farm Bureau, adopted a "scorched earth policy" against imperiled fish populations. There is also no doubt that fishing groups, Indian Tribes and conservation organizations will be very glad to see him leave office next January.

More information, references, photo galleries, and photos for download of the de-watered Scott and Shasta Rivers are available at http://www.klamathriver.org/tribs/ITP.html