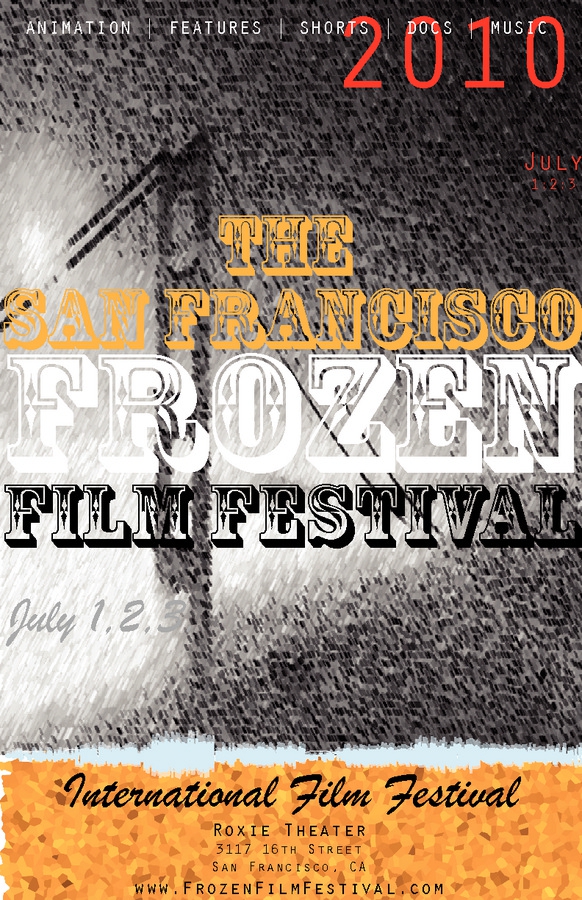 The two day film festival runs July 2nd and 3rd at the Roxie Theatre and represents a new breed of festival programming characterized by a focus on innovation and breaking the rules.

The Frozen Film Festival is a nonprofit organization dedicated to creating avenues for independent filmmakers and artists from underserved communities to display new, cutting edge work.

Isaac Schild, Co-founder of The Frozen Film Festival states, “We believe more opportunity needs to exist to exhibit socially relevant films and allow them to have an impact in peoples lives. We are on the front lines, defining the future of film. We present how culture and technology are shaping film and digital media.”

Frozen Film Festival Co-founder Gabriel Bellman was invited to speak on the subject of “New Media and the Future of Film and Social Media” at the 2009 Film Festival Summit in Las Vegas .

The Frozen Film Festival, which takes its name from the distinct chill of the San Francisco summer, will showcase 50 new films, including recent Sundance and Cannes selections. Some of the films presented in this year’s program are:

DIVE: Kicks off the festival- following a family as they attempt to live off of food found from garbage- an indictment over the wastes of the western world, and a primer on the etiquette of Dumpster diving. (Plays Friday, July 2nd, Roxie Theater, 5:00pm)

CALIFORNIA: STATE OF CONFUSION is a compelling short documentary that examines the contradiction of state, federal and local law as it pertains to the use and distribution of medical marijuana. (Plays Friday, July 2nd, Roxie Theater, 6:45pm)

575 CASTRO ST.: 575 Castro St. reveals the play of light and shadow upon the walls of the Castro Camera Store set for Gus Van Sant’s film Milk. These mundane shots are almost bereft of movement and sound. So quiet, so still. All the better to showcase the range of emotions evoked by Harvey Milk’s words on the soundtrack. The audio track is an edited down version of the 13-minute audio-cassette that Harvey Milk recorded in his camera shop on the evening of Friday, November 18, 1977 (a few weeks after his election to the San Francisco Board of Supervisors which made him one of the first openly gay elected officials in the United States ). Labeled simply: “In-Case” the tape was to be played, “in the event of my death by assassination.” The sensibility of 575 Castro St. hearkens back to the dozens of Super 8 gay short films of the ‘70s that passed through Harvey Milk’s hands to be processed and developed. The film was commissioned by FilmInFocus.com to be showcased online in conjunction with the theatrical release of Milk. (Plays Friday, July 2nd, Roxie Theater, 6:45pm)

SOUNDS LIKE A REVOLUTION: A revelation of music, activism, and inspiration, this Music Documentary chronicles diverse bands such as Rage Against the Machine, folksters like Pete Seeger, and local icons Michael Franti and a host of others. Rock out and enjoy this mixture of music and activism which seeks to answer the question: Should Musicians Make Music that Challenges Society? (Plays Saturday, July 3rd, Roxie Theater, 7:15pm)

THE VINYL FRONTIER: This documentary chronicles the rise of a revolution in Art: vinyl art. Using graffiti artists, musicians, and underground artists from around the world, this new 'toy' art has turned the art world on its head, and spun a break-dance 360. Features local icons Frank Kozik, and a cast of wild boundary pushers turning melted plastic into political statements and gallery pieces. Artists to speak after. (Plays Friday, July 2nd, Roxie Theater, 8:00pm)

MY RUN: After losing his wife to breast cancer and driven by the experience of raising three children on his own, Terry Hitchcock wanted to accomplish the impossible: to run 75 consecutive marathons in 75 consecutive days to bring awareness to the struggle of single-parent families. Narrated by Academy Award winner Billy Bob Thornton. (Plays Saturday, July 3rd, Roxie Theater, 1:00pm)

THE SUNDOWNER: He was done with his day job, done with the corporate world, and done with land. Jon Bendz had his sights set on the open ocean. For six years, this technically-gifted man handcrafted a beautiful fifty-three foot sailboat all by himself, with his dream keeping him going every step of the way. And for almost a decade, this engineer turned man of the sea found out first hand what living the good life is all about. With Jon's best friend, Tim Tomchak, featured in the film alongside him, and rare footage capturing some of the most memorable moments aboard the ship, The Sundowner tells the story of a man whose ambitions were set so high, he thought he could defeat the ocean through sheer force of will. (Plays Friday, July 2nd, Roxie Theater, 6:45pm)

BEST EXPERIMENTAL/ART-HOUSE SHORTS: The weird, the wild, the wonderful- this collection of short films features the most cutting edge and challenging work being produced by visual artists and not just filmmakers. (Plays Saturday, July 3rd, Roxie Theater, 12:00 Noon)

CRIME AND WESTERN SHORTS: Saddle up for 3 short films include a French Film Noir crime caper, an Outlaw Woman Depraved and Incarcerated, and (actress name from Als Beef- can't remember it right now) portraying a hottie causing Tarantino-esque havoc in a saloon in the old West. The Good, the Bad, and the Sexy: it's all here in spurs as these vixen gungslingers usher in a great Saturday night. (Plays Saturday, July 3rd, Roxie Theater, 3:45pm)

To purchase tickets or for more information about the festival, films, local events, and parties please visit http://www.frozenfilmfestival.com.

http://www.frozenfilmfestival.comm
Add Your Comments
LATEST COMMENTS ABOUT THIS ARTICLE
Listed below are the latest comments about this post.
These comments are submitted anonymously by website visitors.