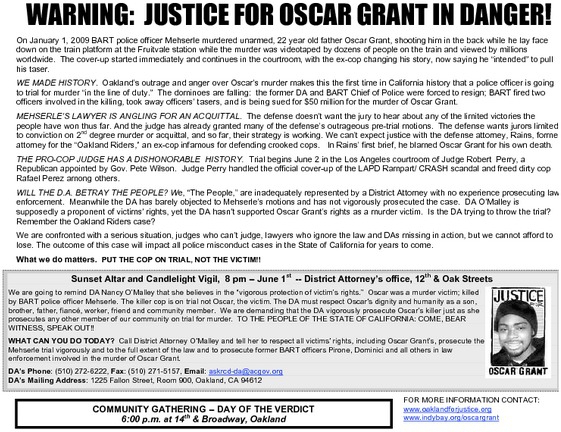 Download PDF (102.6KB)
§SUNSET ALTAR, CANDLELIGHT VIGIL FOR OSCAR GRANT AND ALL VICTIMS OF POLICE VIOLENCE
by Anon Saturday May 29th, 2010 10:21 AM

In the wee hours of New Year's Day, 2009, on the dawn of Barack Obama's inauguration and amidst murmurings in the media about a "post-racial" America, Oscar Grant, a working-class youth of African descent, was fatally and publicly shot in the back by BART police officer Johannes Mehserle. Oscar, newly a father, was unarmed, compliant, and laying face down when executed. Just seconds before the deadly shots rang out, countless individuals (whose voices were captured via cell phone and immortalized along with the last moments of Oscar's brief life) could be heard loudly protesting the BART police officers' violent treatment of Oscar and his friends.

June 2nd marks the first day of jury selection in Johannes Mehserle's trial for murder -- a trial unprecedented in the history of California and in Oakland. Never before has a police officer in this state been criminally charged murder for a line-of-duty shooting. That the indictment of Mehserle should originate in Oakland -- where the so-called renegade cops known as the Oakland Riders were successfully defended against criminal charges by Mehserle's attorney, Michael Rains, earlier this decade; and where killer-cop Patrick Gonzales continues to terrorize the streets with impunity -- makes the trial all the more unprecedented.

Throughout pre-trial proceedings, Michael Rains has attempted to turn the prosecution of Mehserle, an undisputed killer, into a trial about the victim. No amount of spin or legal maneuvers, however, can change the meaning of the blood-chilling scene that was digitally captured on January 1, 2009 for all of the world to see.

On June 1st, in the aftermath of the brutal killing of seven-year-old Aiyana Jones by the Detroit police, community members in Oakland will participate in a vigil for Oscar Grant and all those whose lives have been cut down by officers sworn to serve and protect. Persons fatally shot by the police in recent memory include Oakland residents Gary King Jr., Jody Woodfox, Caspar Banjo, Jose Luis Buenrostro, Brownie Polk, Cammerin Boyd, Andrew Moppin, and many others; whose communities remain starved for resources while 65+% of the Oakland general fund is allocated to police.

The vigil will take place in front of the office of Oakland District Attorney Nancy O'Malley, who took over as D.A. last autumn after Tom Orloff suddenly resigned from the position. O'Malley is said to represent "The People" and prides herself out as an advocate for victims of violent crime. Yet, in regard to Oscar's victimization, she has yet to press charges against former BART police officers Marysol Domineci and Tony Pirone, who verbally and physically abused Oscar only moments before he was shot in the back (and were only recently fired by BART, after a delay of over a year; this, after both were put paid administrative leave and collected upwards of $100,000 each in salary.) Nor has O'Malley -- or most Oakland officials -- passionately and publicly decried the violation of human dignity, life and the public trust represented by the actions of officers such as Mehserle.

We will not stand by as this status quo is tolerated. Police officers are granted the extraordinary license to use lethal force against members of the public -- a power rife with abuse although this is typically buried in the headlines. The police must be vigorously prosecuted whenever they violate the public trust; moreover, the humanity and dignity of their victims must be respected and zealously guarded.

Further information is available at http://www.oaklandforjustice.org/