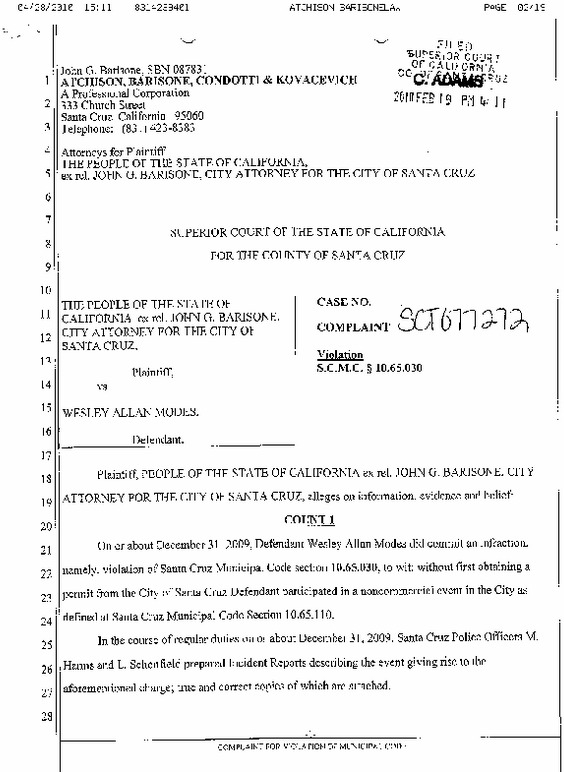 Download PDF (725.3KB)
Background: When local activist Wes Modes accepted a misdemeanor plea deal in December 2009 for his part in defending the Farmer's Market Drum Circle, he figured that would be the end of it. A year suspended sentence and some community service. No problem, he thought. Now the Santa Cruz District Attorney is saying that Modes violated his plea agreement by organizing the Last Night DIY parade. Here's the thing: Modes did not organize that event in 2009.

According to Last Night participants, the new infraction is the latest in a series of police harassment that Wes has received since outing police infiltrators in 2005. "Wes is being unjustly targeted for being an outspoken critic of the Santa Cruz Police Department. He's being singled out from a crowd of community organizers, facilitators and participants. It goes completely against the community spirit of this Santa Cruz celebration," said parade participant Grant Wilson. Now Modes' freedom hinges on a minor code violation for participating in a parade celebrated by the entire Santa Cruz community.

No one has ever been cited for organizing or participating in the event. Until now. Many people have been public about their part in creating the event, but Modes alone received a citation in the mail for "conducting a non-commercial event without a permit." In an interesting plot twist, the city attorney now claims that they ticketed more people than just Modes (those people deny it) and that they charged Modes not with "organizing" but with "participating" (though the charge on his court docs say otherwise).

Note: personal info was redacted from the discovery for personal reasons.
Add Your Comments
LATEST COMMENTS ABOUT THIS ARTICLE
Listed below are the latest comments about this post.
These comments are submitted anonymously by website visitors.