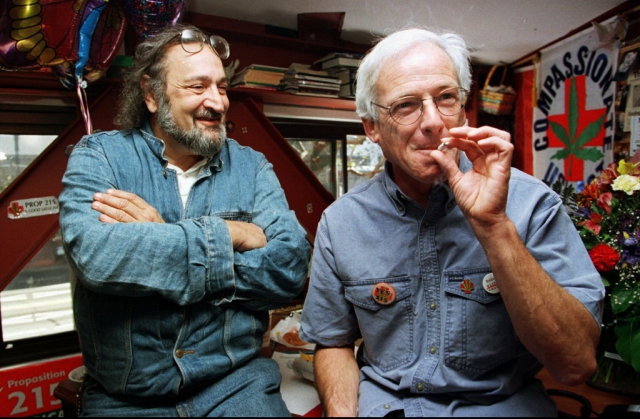 original image (1024x671)
Writer and activist Jack Herer, whose 1985 book "The Emperor Wears No Clothes" ignited the modern marijuana legalization movement, died Thursday from complications from a September heart attack that felled him moments after speaking at a Portland rally. He was 70.

Herer had been recuperating since March in Eugene. His wife, Jeannie, was at his side at the house the couple had rented when he died.

Fellow activists expressed sorrow at losing the man who racked up hundreds of thousands of miles crossing the country for nearly 40 years campaigning to restore the hemp plant to American agriculture.

"He was one of my personal heroes," said Madeline Martinez of Portland, executive director of the Oregon chapter of the National Organization for the Reform of Marijuana Laws.

Herer died just as the movement is gaining momentum. Oregon and 13 other states plus the District of Columbia now permit medical marijuana. Last fall, the Obama administration said it will not prosecute for possession in medical marijuana states. In November, California residents will vote on a legalization initiative; activists in Oregon and Washington are gathering signatures now for similar initiatives.

He was living in Portland in the early 1980s when he wrote "Emperor," now in its 11th printing.

The book says the government banned hemp in 1939 as part of a campaign to eliminate the scourge that went by the Mexican slang marijuana. But few people, Herer wrote, realized that marijuana was the dried flower of the female hemp plant, which humans had used as medicine for thousands of years.

The rest of the hemp plant, Herer argued, could do nothing less than save the world. For millennia, he said, people made fiber, clothing, rope, fuel, high-protein food from the fast-growing, easily cultivated plant, and they could again.

And Herer loudly proclaimed the right to get high, arguing that in fact, people ought to get high, morning, noon and night. He found medical research showing that marijuana can protect the body against cancer.

Born in New York City, Herer grew up in Buffalo, N.Y, the youngest of three children. He dropped out of high school and joined the Army, serving in Korea. After his hitch, he picked up work as a sign painter.

In the early 1960s, he moved his wife and family to Los Angeles. A short time later, he divorced but stayed close with his children. He married and divorced twice more before marrying Jeannie Hawkins in 2000.

Herer came to marijuana relatively late in life, smoking his first joint at 30. He chucked the sign business and opened a head shop on Venice Beach, then made a lifelong friend in "Capt." Ed Adair, another head shop owner and a longtime marijuana advocate in Los Angeles.

In 1973, the men pledged to campaign until marijuana was legal, everyone imprisoned for possession was freed or they turned 84. Adair died in 1991 and Herer fought on.

Herer was arrested in 1981 for trespassing on federal property while collecting signatures for a California ballot initiative. He served 14 days in prison and started writing, "The Emperor Wears No Clothes."

After his release, Herer moved to Portland to open a head shop called The Third Eye, now a fixture on Southeast Hawthorne Boulevard. He completed the book in Portland, got it printed on hemp paper and began his years-long travels across the country.

In 2000, at a hemp festival near Eugene, Herer suffered a stroke and endured a long, agonizing recovery. He had improved in recent years and resumed his speaking schedule. He attributed his better health to daily use of a highly concentrated marijuana oil.

He resumed his heavy travel schedule, which included a Sept. 12 speech at Portland's Hempstalk at Kelley Point Park. He delivered a tub-thumbing speech, walked offstage and fell over from a heart attack.

He survived and eventually his wife rented a house in Eugene, where she cared for him until his death.

Herer is survived by his wife, six children, a brother and a sister. Funeral arrangements are not completed.

-- Anne Saker
http://www.oregonlive.com/portland/index.s...
Add Your Comments
Support Independent Media
We are 100% volunteer and depend on your participation to sustain our efforts!