by Cannabis Culture (repost)
CANNABIS CULTURE - Four-Twenty, or 4/20, or April 20th, is the world-recognized international day of celebration for the planet's estimated 250,000,000 members of the cannabis culture. 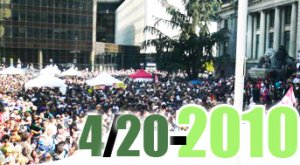 It's time to celebrate our cannabis culture! Share your thoughts, photos, videos, and stories about YOUR 4/20! Check out the Official 4/20 Thread in the CC Forums!

It is interesting that most of the official reports and rumors about the origins of 4/20 trace directly back to 'The Waldos' in San Rafael High School in 1971. 'The Waldos' have many items of date-documented evidence, some from the San Rafael Police department, proving that they would smoke cannabis at the campus statue of Louis Pasteur at 4:20pm everyday. It passed from those high school students, into the 70's Grateful Dead culture where it spread all across the United States.

The students there may have been inspired by an older reference, like H.P. Lovecraft's mention of the time in the story "In the Walls of Eryx", in which a man exploring the planet Venus encounters a "mirage-plant" and begins to see "dancing lights" and "shimmering spectral scenery". After regaining his senses, he realizes it is 4:20.

Over 35 alternative stories, legends, rumors about the origins of 420 are known to circulate, including in the mainstream media, but the simple explanation above is most likely the correct history. Other purported sources for 4/20 are Bob Dylan's song Rainy Day Woman #12 & #35. 12 x 35 = 420. The song is more commonly known as Everybody Must Get Stoned. Written in 1965, it would be the oldest and most compelling of the competing 4/20 legends. Another is the song written by John Lennon for Tim Leary's aborted run for California Governor in 1969, Come Together, is 4 minutes, twenty seconds long.

The actual 4/20 day, as a celebration taking up all or various parts of the day, started in Vancouver in 1995. The HEMP BC store, Marc Emery's original hemp store in Vancouver, was staffed by Grateful Deadheads. Marc Emery recalls; "I remember my store manager Danna Rozek and an employee named Cindy Lassu came up to me in early April 1995, and said, 'Marc, can we have a 4/20 celebration on April 20th next door in Victory Park?' I responded, 'like, on 4:20 in the afternoon on April 20?' and they said, "No, like all day on April 20?" they replied. "What will we do all day?" I asked, and they said "Smoke pot all day and play music." I replied "We can't just smoke pot all day. That's decadent. No, you can't do it.". So rebuffed, Ms. Rosek then asked "Can we just go ahead and do it anyway even if you don't approve?". So I said yes and the staff organized the first April 20 celebration I ever heard of, at Victory Square/Park next door. 200 people came that April 20, 1995 and it was a lovely time, with music starting at 2.00 pm and going till 7 pm. In 1996, over 500 people came to Victory Park and smoked pot all day with the event starting at noon. It was decided that Victory Square was too small for the 1997 April 20th smoke-fest, so the traditional political rally location of the Vancouver Art Gallery, in downtown Vancouver's financial district, was the site of the 1997 4/20 celebration. Over 1,000 people attended the 1997 Vancouver 4/20 and was widely covered in media and the phenomonon began to spread to other locations across North America.

These days, if the weather is fine, tokers around the globe jam into their main city square, beginning in the early afternoon, finally climaxing with massive simultaneous smoke-outs at 4:20pm every April 20th!

What's going on in the cannabis culture today near you?

Ganja get-togethers will be protesting the unjust prohibition of cannabis by proudly promoting and puffing in cities across Canada, the United States and the World.

The 4/20 smoke-outs are a series of cannabis rallies that will demonstrate, as they do every year, the impracticability of enforcing the current marijuana laws. Drug peace activists invite all herb enthusiasts to join them in defiant solidarity. Everyone is invited to publicly show their love of the weed and experience a taste of freedom by doobie demonstrating with activists in your area.

Many well-known tourist's traps have been targeted for toking in North America, from Toronto's Yonge and Dundas Square, to Denver's Civic Center Park, to the Liberty Bell in Philadelphia, all the way to Vancouver’s Art Gallery and many more…

Denver, Colorado
Smokeout - State Capital in Denver.
Location: Civic Center Park, (intersection of Colfax and Broadway)
The official "Smoke Out" is to occur at 4:20 in the afternoon,
but there will be tons of people hanging out and smoking in the park all day long.
RIP to Ken Gorman, the original organizer of the 4/20 smoke out event in Denver.

Boulder, Colorado
Boulder's Central Park
Corner Broadway & Canyon
Starting at Highnoon we will jam all day to peak at 4:20

Boston, Massachusetts
April 20, 2010: Dan Gervais will start a long 420 walk, from Boston to Los Angeles. He calls it the War on Lies Walk. Waronlies.net
The Freedom Rally Massachusetts Cannabis Reform Coalition (MASS CANN)
Location across the Common on the Carty Parade Field.

Los Angeles, California
Sublime with Rome are back again!
The trio will be hitting the stage at The Palladium in Los Angeles, CA
SmokeOut@420