Add an Event
Newswire
Calendar
Features
Home
Donate
From the Open-Publishing Calendar
From the Open-Publishing Newswire
Indybay Feature
Publish to Newswire
Add an Event
Related Categories: California | Animal Liberation
Circus at Shrine Auditorium caught selling illegal animals
by Animal Advocates
Monday Apr 12th, 2010 5:18 PM
Animal Advocates, Last Chance for Animals, In Defense of Animals and many other animal groups attended a protest at Circus Gatti at the Shrine Auditorium April 11, 2010. Protestors witnessed small children leaving the circus with one inch long red slider turtles. It is illegal to sell turtles under six inches in diameter because children may put them near their mouth. Turtles carry salmonella which can be deadly to children. 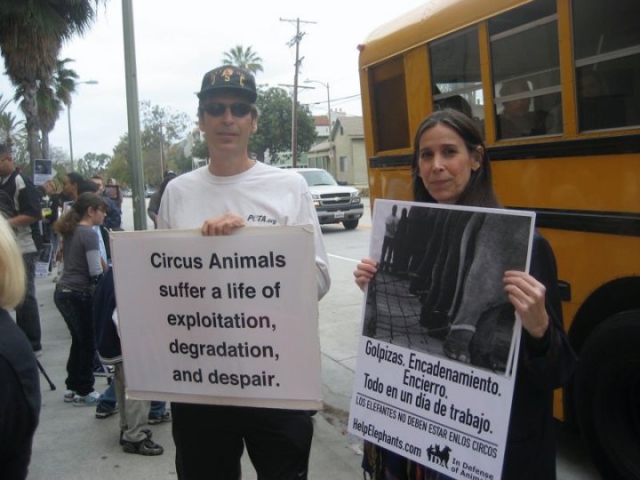 original image (720x540)
After seeing the children with the turtles Mary Cummins President of Animal Advocates decided to buy a ticket and see who was selling the turtles. Three women had a booth in the food court selling small fish and turtles. It is also a violation of the health code to have animals next to food vendors.

Their booth was set up as a game of chance. For $5 you get a bowl of ping pong balls which you try to toss into small fish bowls. If you get a ball in a bowl, you get an animal but there's a catch. You must pay $10 for the Kritter Keeper to carry it and $5 for about two tablespoons of food for a grand total of $20. They also offered to just sell the animals for $25. They provided no care sheets or information. Water turtles need a dry place in their tank to sun under a heat lamp. Most likely all of the animals sold died.

After Cummins bought a turtle for evidence she returned and photographed the animals, people and booth setup. The women then started hiding the animals under the table. Cummins called the Los Angeles Animal Cruelty Task Force to report the illegal activity. An LAPD police officer on the scene called animal control to report the activity. Animal control was sent to the circus.

During the peaceful protest a Shrine employee instructed security guards to take the protestors flyers away from members of the public before they entered. The employee ripped them in half and threw them in the trash. This was caught on video, see link below.

Later at the event a protestor started to use a megaphone. An LAPD officer told him to put the megaphone down which he did. Officer Moreno badge # 18763 then grabbed the protestor aggressively, pulled his hands behind his back and handcuffed him. See video below. Officer Moreno then put him inside his police car for questioning and to run his identification. He ultimately released him without citing him when he realized that is is legal to use amplified sound during certain hours.

The protestors were protesting the use of animals in circuses. Animals used in circuses are treated inhumanely. Baby elephants are taken from their mothers and put in chains. They are taught to perform tricks for human amusement. Trainers use bull hooks and hot sticks on the animals. They are generally in chains when they are not performing. They live short and inhumane lives.

Protestors chose to protest at the Shrine circus because last week a trainer was killed by an elephant at another Shriner circus in Pennsylvania. These circuses have been cited for violations of the Animal Welfare Act. PETA issued a statement saying the accident "should come as no surprise" given circuses' track records with animal abuse.

Video of events are here
http://www.YouTube.com/ActivismForAnimals

Photos
http://www.facebook.com/album.php?aid=212527&id=733516211&l=935b53d92d
http://www.animaladvocates.us
Add Your Comments
LATEST COMMENTS ABOUT THIS ARTICLE
Listed below are the latest comments about this post.
These comments are submitted anonymously by website visitors.