BART Action Disrupts Trains with "No Justice, No Rush", San Francisco: Photos (1 of 2)

by dave id
A spirited demonstration was held in San Francisco BART stations to push for justice and accountability in the murder of Oscar Grant. The action was called specifically to advance three demands: fire BART police officer Tony Pirone, charge Tony Pirone, and disband the entire BART police department. Over a hundred people showed up for the 3:30pm meet-up at Embarcadero station platform; around two hundred were present by the time the action itself was scheduled to begin at 4pm.

[Pictured below is an activist handing out fliers in the days prior to warn BART passengers of the impending disruption; BART itself did nothing to warn riders other than a short press release posted on its website within hours of the action.] 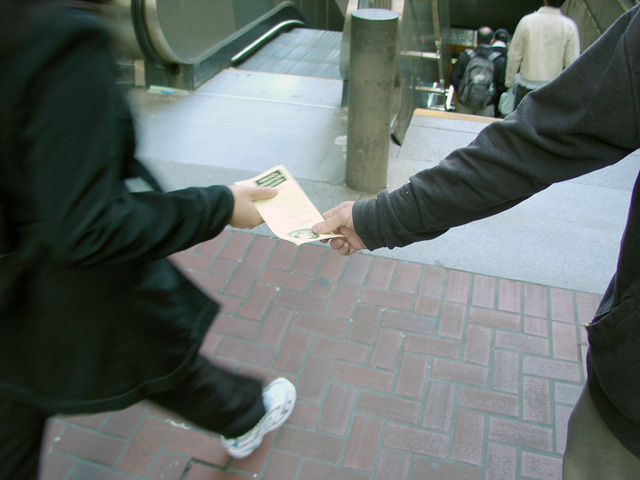 Knowing that the action had been organized as "Civil Disobedience to Hold BART Cop Tony Pirone Accountable" -- and with the presence of two dozen or more BART police and green-vested workers on the platform -- the air of anticipation before the action began was so thick that it could have been cut with a knife. While activists have fliered on BART trains and numerous demonstrations have been held outside of BART stations, at BART Board meetings, and at the Alameda county court house -- methods familiar to those who have been fighting for justice for Oscar Grant over the last 16 months -- an action of this type inside a BART station has never been attempted.

Demonstrators on the platform held banners and signs waiting for the action to commence. Right on time, the Brass Liberation Orchestra (BLO) lifted up their instruments and began to play, signifying that the action was on. People chanted and passed out fliers to BART commuters. Still, though, there was an anxiety in the air because the action had been planned as a "framework" action, creating a space for autonomous affinity groups to engage in various forms of civil disobedience, from "red", which implies an action such as a sit-in and refusing to follow police instructions to move, to "yellow", which would involve general obstinacy but ultimately complying with police orders. "Green" roles in the action would involved general support such as fliering, chanting, legal support, and so forth.

With the uncertainty surrounding this as-of-yet unique action, it was expected that most people would take "green" roles, and it appeared just after 4pm that the crowd was waiting for someone or some group to take a higher level action. A picket line was formed and several dozen demonstrators marched around the edges of the platform. A few demonstrators walked through a train car stopped at Embarcadero, from the front to the back door, and landed again on the platform before the train left the station. Not long after that, a consensus was reached with those on the platform to take a train to another station in downtown San Francisco. Being that there were so many demonstrators, it took some time to get most everyone on the train. Chants of "No justice, no rush" began to ring out -- and demonstrators deliberately slowed their walk onto the train in order to disrupt BART's normal rush hour schedule.

What looked like it would largely be a "green" action with some autonomous "red" groups participating evolved into an almost entirely "yellow" action, with virtually everyone in attendance helping to disrupt the normal flow of BART traffic. Amongst the BLO inspiring folks by playing on moving trains, mass drumming on train car ceilings, and other chants, "No justice, no rush, no justice, no rush, no justice, no rush," became the call to action as trains were boarded and exited. Ad hoc group decisions were made to move from one station to another, crossing platforms, and boarding other trains in downtown stations. The trains were so crowded, and group decisions may not have clear to everyone present, that at times some demonstrators remained behind at various stations, to take later trains, arriving to raucous cheers when they caught up with whatever station was holding the largest group of demonstrators. Over time, the mass decision-making improved and the large group of demonstrators became smoother in choosing which trains and stations to enter and exit.

Most passengers took it in stride, looking on smiling in bemusement. Only two or three real hotheads shouted things like "Go back to Berkeley, you Marxists." Far more riders swung their heads back and forth along with BLO songs or chimed in on the chants. Some even joined the traveling protest.

Eventually, some of the yellow-vested BART employees became visibly aggravated with the successful disruption of service and put their hands on demonstrators, trying to push or pull them out of train car doorways. Realizing that it was not their job to push people around, the green vests backed off. Then police began to do similar things, sometimes stepping in front of the doorways, refusing to allow more to enter or exit trains, cutting demonstrators in two -- which probably worsened delays with more separate groups of demonstrators floating between stations. At one point, as people tried to cram onto a crowded train, BART police decided to pull one person at the door away for arrest. In all, BART's normal rush hour schedule was disrupted and delayed about 15 minutes in both directions by the action.

The action ended at 6pm as planned -- at which point a few dozen participants headed up to the fair gate level of Embarcadero station where BART police were holding the single arrestee. Demonstrators pounded on the glass that separated them from the arrestee, irritating Interim BART police chief Dash Butler who then sent riot-clad BART police to physically push demonstrators back twenty yards. The arrestee was later hurried up escalators with several BART police surrounding him, taken to a squad car waiting at street-level, and transported to SF County Jail at 850 Bryant Street for booking. About two dozen demonstrators and a National Lawyer's Guild attorney made their way to the jail to wait in support. The arrestee was released just before 11:30pm, having been cited with three misdemeanors related to obstructing BART trains. All of the charges have since been dropped. 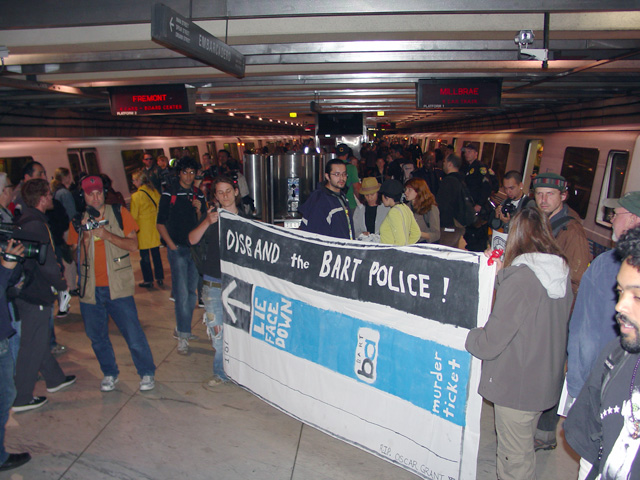 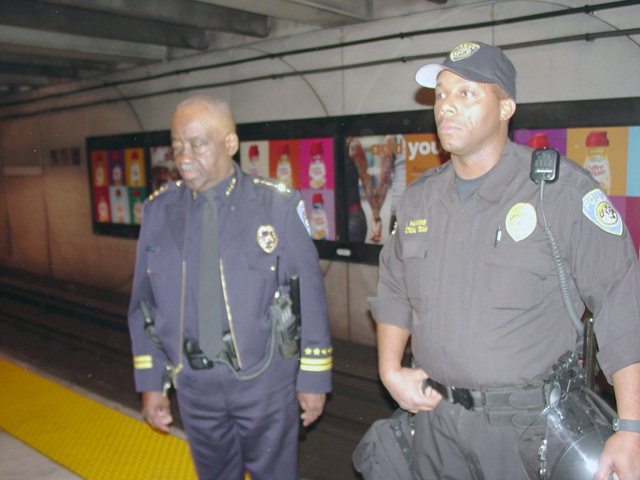 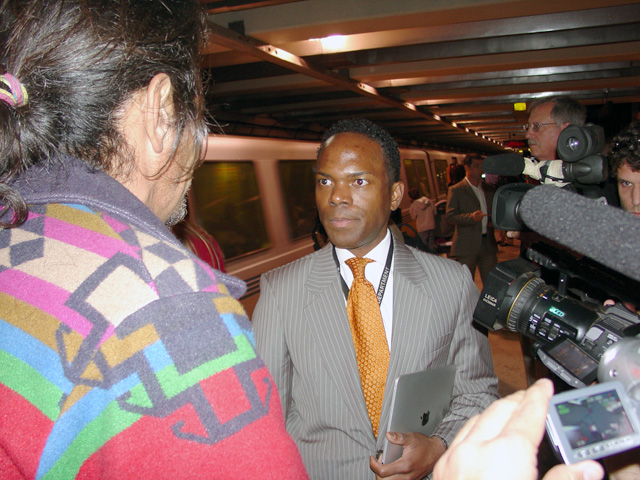 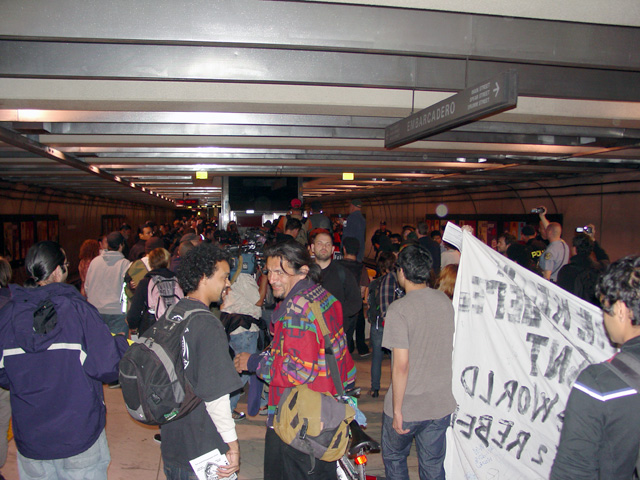 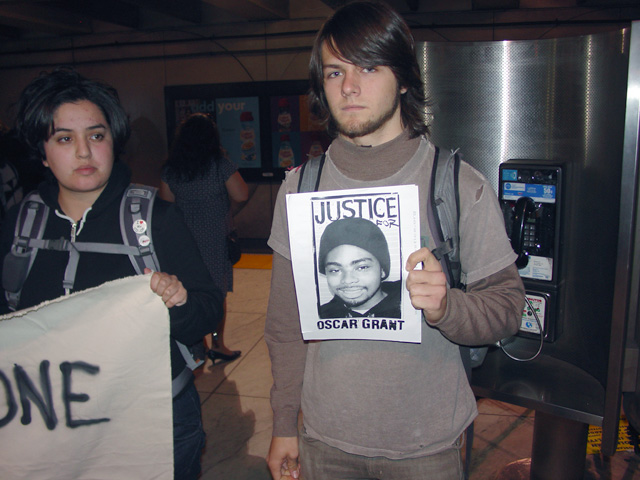 END_OF_DOCUMENT_TOKEN_TO_BE_REPLACED
§Let the fun begin: BLO kicks off the action with a song
by dave id 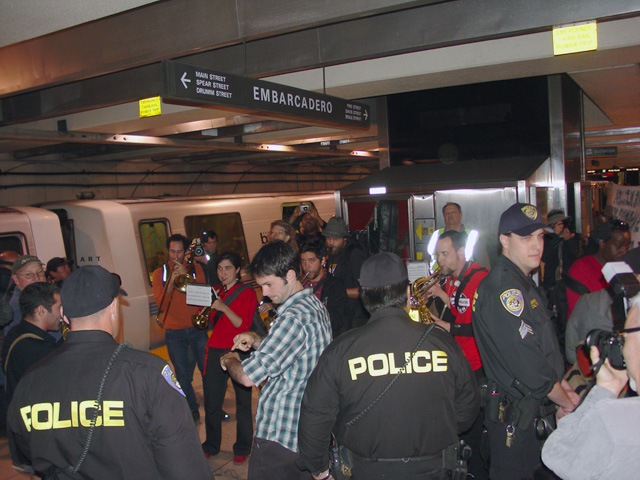 Police then warned the BLO that they would be arrested if they continued to play on the platform, under the pretense that passengers could not hear BART announcements.
END_OF_DOCUMENT_TOKEN_TO_BE_REPLACED
§Fire and charge Tony Pirone
by dave id 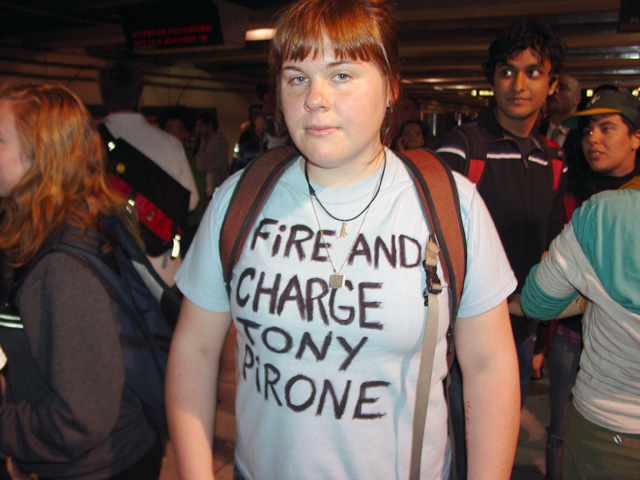 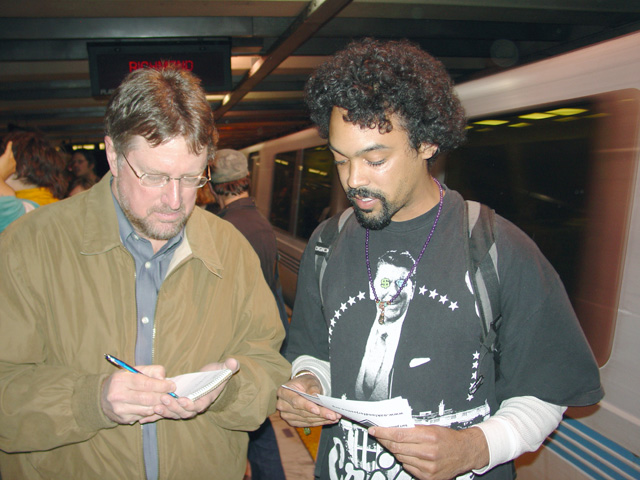 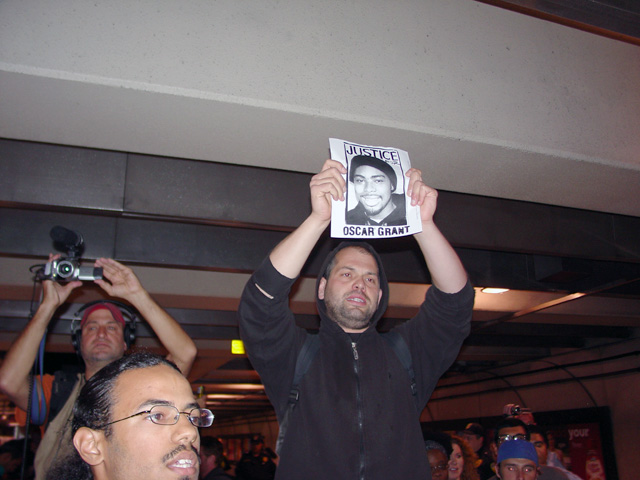 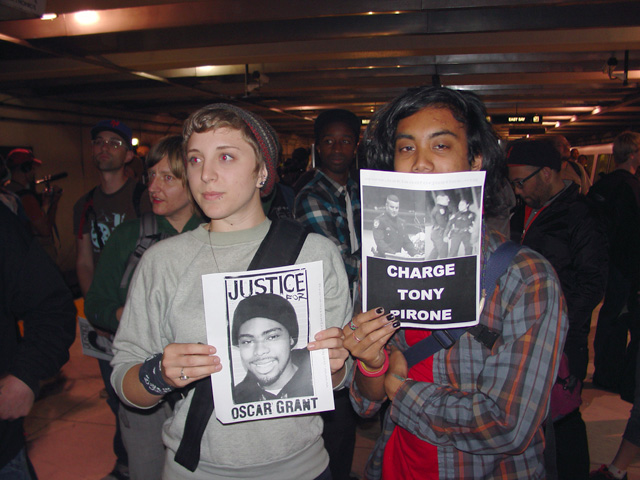 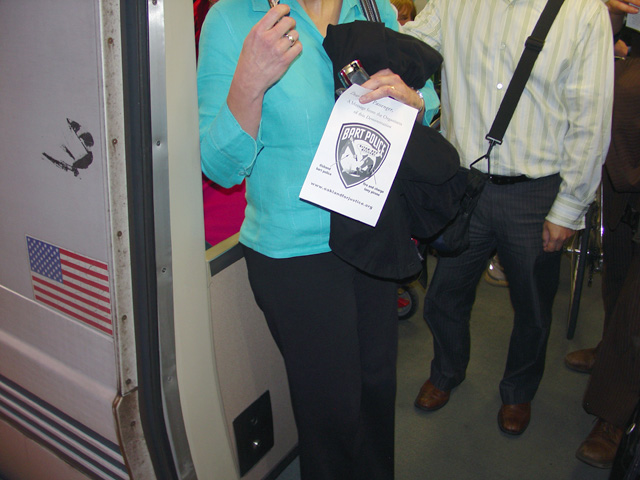 Flier can be found at http://www.indybay.org/newsitems/2010/04/09/18644181.php
END_OF_DOCUMENT_TOKEN_TO_BE_REPLACED
§Embarcadero is mobbed with demonstrators, chanting and still waiting 10 minutes in
by dave id 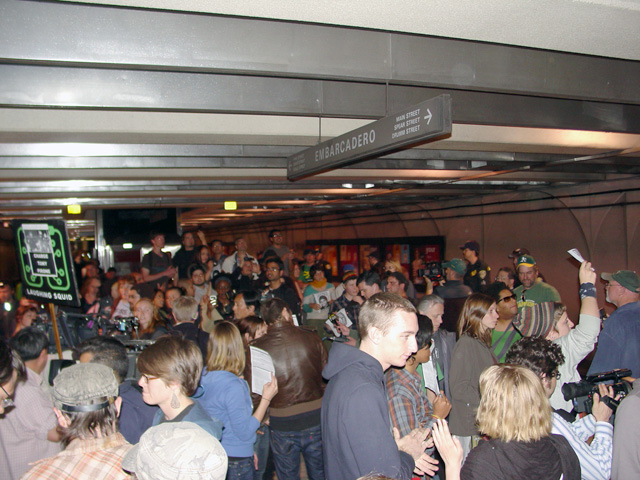 END_OF_DOCUMENT_TOKEN_TO_BE_REPLACED
§BLO heads up escalators to fair gate level, playing as they go
by dave id 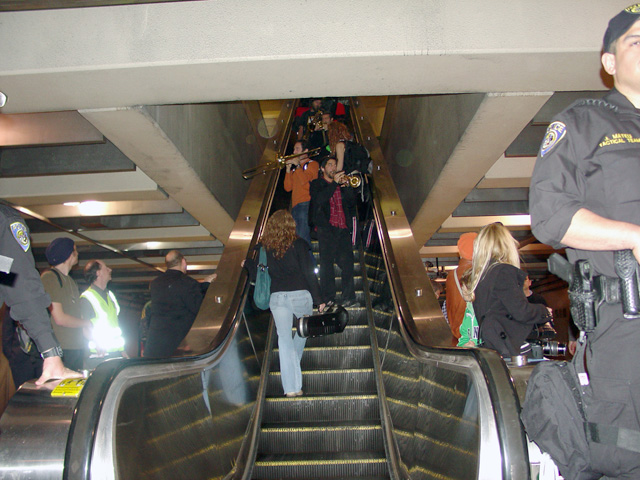 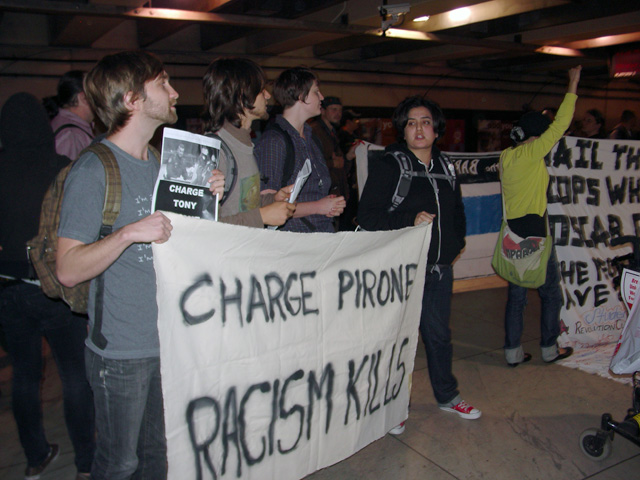 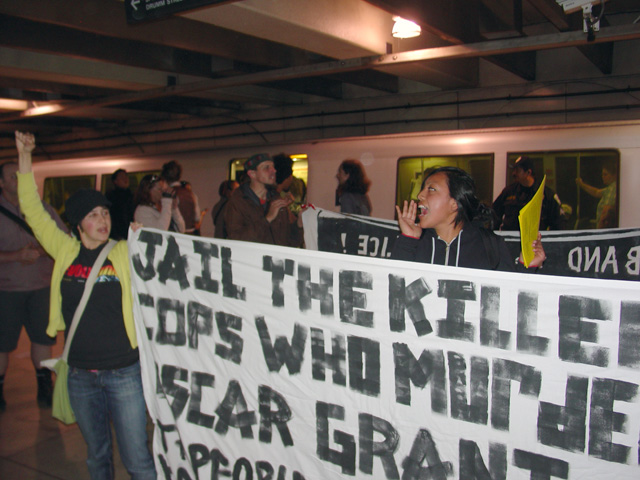 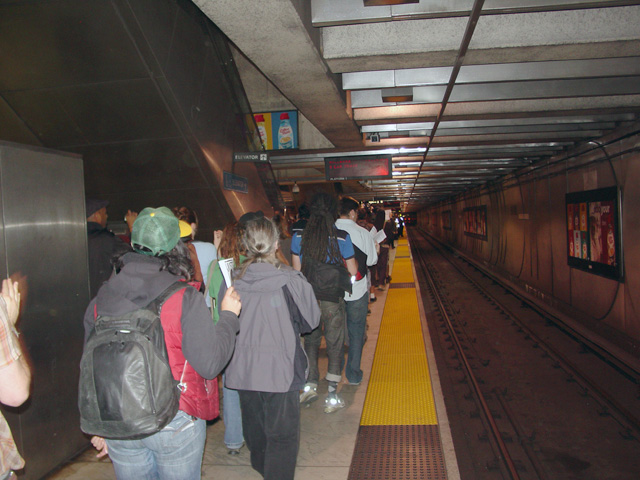 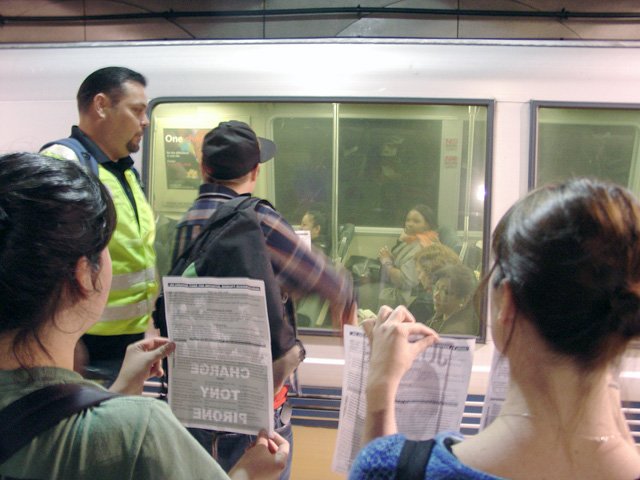 Green vest rushes in to say, "Get off the yellow line."
END_OF_DOCUMENT_TOKEN_TO_BE_REPLACED
§Disband the BART police
by dave id 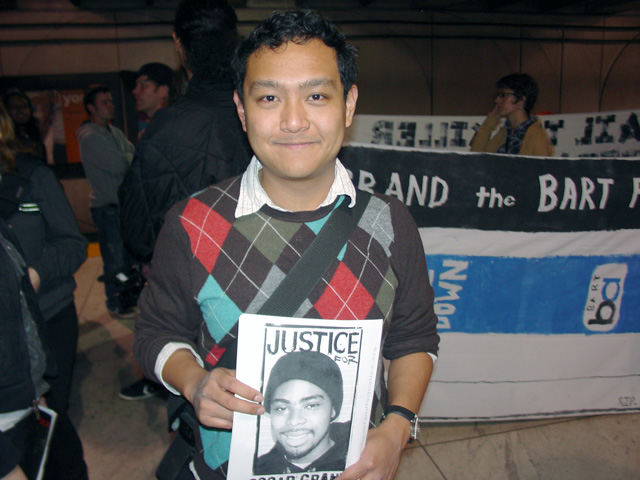 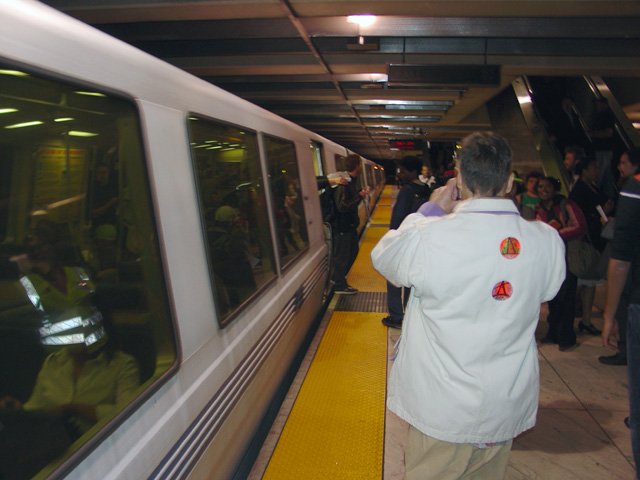 END_OF_DOCUMENT_TOKEN_TO_BE_REPLACED
§BART Action Disrupts Trains with "No Justice, No Rush", San Francisco: Photos (2 of 2)
by dave id
Second set of photos from the action can be found at http://www.indybay.org/newsitems/2010/04/11/18644388.php

END_OF_DOCUMENT_TOKEN_TO_BE_REPLACED
Add Your Comments
Comments (Hide Comments)
§Nice job!
by j..
Glad I decided to drive into SF for work that day though, looks like the downtown BART stations were a mess. Was with you in spirit though!
Add a Comment
Support Independent Media
We are 100% volunteer and depend on your participation to sustain our efforts!