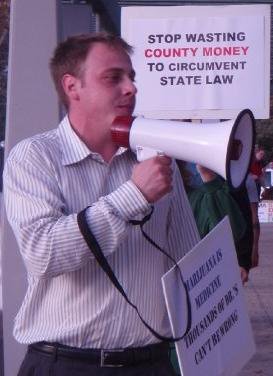 Davidovich was facing four felony charges and the very real possibility of a long prison sentence.
A Navy veteran with an honorable discharge, Davidovich started a legal medical marijuana collective in San Diego, carefully abiding by state law.
Eugene was arrested in February 2009 by San Diego narcotics officers for providing another legal patient with medical marijuana. He told Toke of the Town that the chief investigative officer in his case testified on the stand that the officer based his expert testimony on "medical marijuana training" on a handout from something called the Narcotic Educational Foundation of America, "Drug Abuse Education Provider of the California Narcotic Officers' Association."
These "training" materials, titled Use of Marijuana As A "Medicine" (PDF) (the quotes are theirs), we learn immediately -- in the first sentence! -- how these guys roll.
"Marijuana, a plant from the cannabis family, is illegal and highly psychoactive," we are given to believe. No mention of the fact that medical marijuana use is legal in California, and has been for 14 years now -- and this, in materials used to educate law enforcement officers.
With training like that, it's no wonder these clueless morons chose to spend hundreds of man-hours and tens of thousands of dollars prosecuting a legal medical marijuana patient and provider, even as budget-challenged San Diego County is desperately looking for ways to cut spending.
"It is actually scary what goes on in court," Davidovich told Toke of the Town. "I really hope that somehow a stop can be put to this. This is one of the reasons I am so public about these hateful people. There are a lot of patients who are needlessly suffering here in San Diego."
​"Unfortunately the district attorney of San Diego, Bonnie Dumanis, thinks that she not only should enforce the law, but make her own and has declared marijuana illegal in San Diego," said activist Ed Rosenthal, the Guru of Ganja.
"Eugene is caught up in a vise and trap and was busted with a giant quantity of marijuana: an ounce wrapped up with his medical certificate," Rosenthal said.
Surveillance video from a November 2008 undercover drug sting showed what prosecutors claimed was an illegal drug deal between Davidovich and an undercover detective, who had obtained a medical marijuana permit under a false identity, reports 10News.com.
In the footage, two men are seen standing on the porch of a Pacific Beach home. The undercover officer pretended to be a medical marijuana patient under the alias Jamie Conlen. Davidovich admitted he came to the home to sell marijuana, but said he legitimately believed Conlen was, in fact, a legal patient as he claimed.
According to Davidovich's defense attorney, Michael McCabe, Davidovich operates a medical marijuana collective, which allows patients to legally produce and sell marijuana to each other as long as they are not doing so for profit, under Proposition 215, passed in 1996 by California voters.
The footage clearly shows Davidovich asking for the undercover officer's medical marijuana ID card outside the home, before selling him the marijuana.
Activists say the DA's office remains entrenched in the old-school law enforcement viewpoint that marijuana is inherently dangerous and should be illegal in all cases.
The San Diego County Board of Supervisors, which controls the purse strings of the DA's office, has held a consistently combative stance against the state on the medical marijuana issue, having refused for six years -- until forced by the U.S. Supreme Court! -- to issue medical marijuana I.D. cards.
In fact, the county's stubborn intransigence caught the eye of the Bush Administration, which praised the actions of the Board of Supervisors in fighting the implementation of California's medical marijuana law.
One can only hope these wasteful and cruel shenanigans from the San Diego County Prosecutor's Office will result in a humiliating defeat for pot-hating District Attorney Bonnie Dumanis when she runs for reelection.
http://www.tokeofthetown.com/2010/03/victo...
Add Your Comments

§Bravo Eugene
by Bill A
Friday Mar 26th, 2010 4:49 AM
Sometimes the good guys do win. This 10-day trial easily cost San Diego taxpayers 100s of thousands. Add in all the other bogus cases that came from Operation Endless Summer, and the wasted money is easily in the millions... all because Bonnie Dumanis can't accept state law. Someone needs to launch a suit against this office for wrongful prosecution.
Add a Comment
Support Independent Media
We are 100% volunteer and depend on your participation to sustain our efforts!