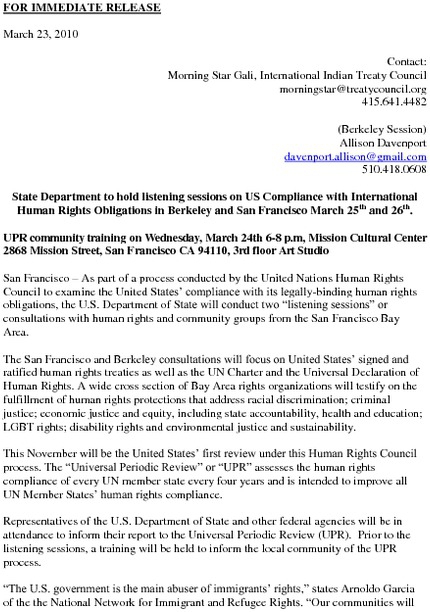 Import event into your personal calendar
Date:
Thursday, March 25, 2010
Time:
8:30 AM - 12:30 PM
Event Type:
Other
Organizer/Author:
Allison Davenport
Location Details:
The Berkeley consultation is on Thursday, March 25 at the Bancroft Hotel, 2680 Bancroft Way, Berkeley, CA and will begin at 8:30 am and end at 12:30 pm
FOR IMMEDIATE RELEASE

State Department to hold listening sessions on US Compliance with International Human Rights Obligations in Berkeley and San Francisco March 25th and 26th.

San Francisco – As part of a process conducted by the United Nations Human Rights Council to examine the United States’ compliance with its legally-binding human rights obligations, the U.S. Department of State will conduct two “listening sessions” or consultations with human rights and community groups from the San Francisco Bay Area.

The San Francisco and Berkeley consultations will focus on United States’ signed and ratified human rights treaties as well as the UN Charter and the Universal Declaration of Human Rights. A wide cross section of Bay Area rights organizations will testify on the fulfillment of human rights protections that address racial discrimination; criminal justice; economic justice and equity, including state accountability, health and education; LGBT rights; disability rights and environmental justice and sustainability.

Representatives of the U.S. Department of State and other federal agencies will be in attendance to inform their report to the Universal Periodic Review (UPR). Prior to the listening sessions, a training will be held to inform the local community of the UPR process.

“The U.S. government is the main abuser of immigrants’ rights,” states Arnoldo Garcia of the the National Network for Immigrant and Refugee Rights. “Our communities will use the UPR to expose the U.S. and press for action to comply with the CERD by ending all forms of racial, ethnic, nationality and religious profiling.”

“This really is an historic event,” said Alberto Saldamando, General Counsel of the International Indian Treaty Council. “In the 36 years of work of the IITC at the international level, this is the first time the U.S. government has ever asked the victims for their opinion on how the US is doing to comply with its internationally legally binding human rights obligations.”

The meetings will be recorded, and a written report will be posted on the U.S. Department of State’s website. This summary may be used as part of the U.S. government’s submission to the Human Rights Council. Organizations are also welcome to submit a 5-page report directly to the UN before April 19th.

The government selected several cities in the US, including San Francisco and Berkeley, in which to conduct listening sessions or consultations. Consultations have been held in New Orleans, Washington, D.C., New York City, El Paso and Albuquerque, and others are planned for Detroit, Chicago and Birmingham.


For more information and to register for the upcoming sessions, visit http://uprconsultationsf.eventbrite.com/

Added to the calendar on Tue, Mar 23, 2010 4:13PM
Add Your Comments
Support Independent Media
We are 100% volunteer and depend on your participation to sustain our efforts!