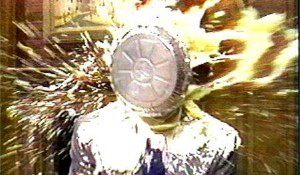 San Francisco, CA: Author and animal holocaust denier Lierre Keith was ambushed by three masked activists while speaking at the San Francisco Anarchist Bookfair on Saturday. In the as-yet unclaimed action, Keith was physically stopped, in the middle of her speech in the main auditorium at the County Fair Building in Golden Gate Park, from continuing to advocate for and incite the enslavement, torture and slaughter of innocent non-human animals.

Keith has referred to vegans, those who eat no animal flesh or secretions, as "ignorant and child-like", despite a wealth of scientific literature that supports the beneficial effects of a vegan diet not only for humans, but also for the environment. Keith also promotes the Weston A. Price Foundation in her book, "The Myth of Vegetarianism"; founded by a dentist who used facial measurements to allegedly study human nutrition, the foundation today serves as a DC-based lobbying group whose sponsors include meat and fish producers.

The action in San Francisco appears to highlight the increasingly militant stance taken by those willing to defend non-human animals lives with their own, demonstrating with action, and not words, that the time for polite discussion with those who oppress animals has expired, or as some have phrased it, "Negotiation is Over". Analogously, if Keith had been speaking to a crowd of men telling them how important it was to rape women, or if some equally misogynist skinhead had been invited to speak about having black people strung up with nooses, I don't think a rational group of anarchists in the audience would have stood politely by and listened to such hate speech.

Keith was pied by three separate pies (allegedly laced with pepper spray) by three masked vegan warriors, who escaped without being discovered. Keith then called the "agents of state oppression", anarchist language for the police, to file an assault report. In the past, Keith's mean-spirited book and speaking engagements have largely been one-way conversations with her dominating the dialogue; that appears to have changed with Saturday's event. No arrests were made.

The action has been predictably criticized by those who advocate animal abuse by unnecessarily killing and eating them, but also by some pathologically pacifist vegans who decry the use of measured force to stop a much greater physical violence. No non-human animal scheduled to be slaughtered for their flesh, nor any of their ideologically-consistent supporters has yet come forward with a single negative comment regarding the action. The masked marvels who pied Keith made their statement very eloquently and succinctly on behalf of the billions of animals she advocates killing, animals who suffer silently, without a voice.

Peter Young, a NAALPO press advisor wrote immediately after the attack: "Predictably, the choir of opposition to this action so far is a collection of vegan regressors, 'rewild' fetishists / weekend-warrior primitivists, and those who hide behind an 'anything goes' nouveau-anarchist critique - all of which breed the culture of degeneracy and hedonistic caveman role-playing that give Lierre Keith her only audience. A disrupted speech is trivial in comparison to the billions of deaths this woman promotes, but yesterday's resistance to this death-merchant will undoubtedly give Keith some (vegan) 'food for thought' while she travels the country, promoting the consumption of animals."

Both Keith and other phony environmentalist omnivores like her fellow author Derrick Jensen, use the fact that they have a medical illness as an excuse to not only eat meat, but to promote the killing of billions of animals. Surgeon Jerry Vlasak, MD has treated the diseases from which these proponents of animal slaughter suffer, and has stated: "The best thing one can do for the majority of human disease is leave off the eating of animals, and as for Ms. Keith and her alleged "malnutrition", vegans and vegetarians are far better nourished and healthier than any meat-eating group. As is well-known by virtually all medical doctors, most premature death in America is due to heart disease, stroke and cancer, all associated with a meat-based diet."

http://www.animalliberationpressoffice.org
Add Your Comments
§no such thing as vegan
by brandon47
Wednesday Mar 17th, 2010 12:59 PM
Vegans are the some of the biggest hypocrites out there.

First of all, veganism is not actually animal product free, as they claim. Vegans clearly do not understand the importance of animals in plant agriculture. There would be almost no food for them to eat without bee pollination. Bees are placed in hive boxes next massive fields where they are "enslaved" by the bee keepers, work all day for no pay, and then have their honey raided and sold. Bee slavery contributes to vegan food products whether they like it or not.

In addition, much of the fertilizer used in plant agriculture, especially the preferred organic agriculture, is in the form of manure. Last time I checked, manure was still animal dung, and therefore an animal product.

Give it up, vegans. Animals like you are omnivores.

Add a Comment
§Book Fair Organizers Statement
by Joey Cain
(abookfair [at] yahoo.com) Saturday Mar 20th, 2010 9:42 AM
The Bay Area Anarchist Book Fair organizers wish to publicly condemn the violent assault committed against author Lierre Keith at the Book Fair on Saturday, March 13. We wish to extend our apologies to her for not taking more rigorous measures to assure her safety at our event. We urge the Anarchist community and our allies to let the perpetrators of this ugly assault and their supporters know that we will not stand for this kind of violent bullying at our events or in our community.

We want to state the following for the record:

1) The three pies used to assault Ms Keith were in fact filled with red hot sauce and cayenne pepper. There was so much in the “pies” that you could smell the pepper sauce in the area of the speaker’s podium after the attack. We had to warn speakers using the microphone after the attack to not put it too close to their mouths in order to avoid burning their lips from the residue that could not be removed from the microphone. The comrades who had cleaned up the area are willing to testify to these facts.

2) The assailants used a back door leading in from the parking area to gain entry to the auditorium stage which was above and behind the spot where Ms Keith was speaking. When the assault took place the perpetrators were standing approximately three feet above her. The blows were delivered with from behind with considerable force. There is video showing the blows being delivered to Ms Keith.

We are asking anyone with information on the identities of the assailants, photos or additional video of the attack to contact us at abookfair [at] yahoo.com. We will make the information available to Ms Keith.

Add a Comment
§The other comments?
by AA
Saturday Aug 7th, 2010 1:28 PM
There were 15 pages of comments with this thread, now there are just 2, both anti-vegan. What gives?
Add a Comment
Support Independent Media
We are 100% volunteer and depend on your participation to sustain our efforts!