Words Not Pie: The Vegan Response to Lierre Keith at the Upcoming VegetarianMyth.com

by Vegans for Sustainable Agriculture (VeganSustainability [at] gmail.com)
We don’t need pie to humiliate Lierre Keith. As anarcho-primitivists and Weston A. Price followers condemned all vegans as violent psychopaths after Keith’s recent encounter with a spicy pie this weekend, a handful of animal rights activists were peacefully distributing leaflets that strongly disputed some of The Vegetarian Myth’s many inaccuracies and misleading claims (available below). Her book is a dangerous collection of straw man arguments, poorly-sourced pseudo-science, and outright lies. Discrediting the book will be easy, but it will work best with many people working together. To accomplish this, we have purchased the domain www.VegetarianMyth.com and will soon be launching a closely-moderated wiki (or similar site) to crowd-source the vegan critique of the book. 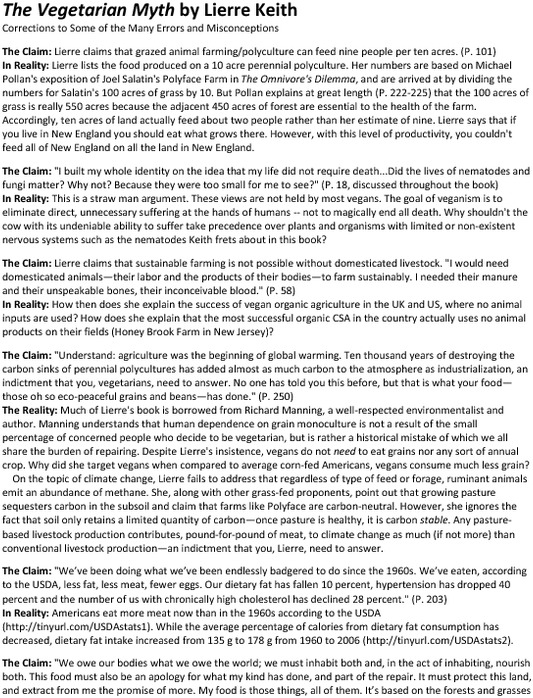 We don’t need pie to humiliate Lierre Keith. As anarcho-primitivists and Weston A. Price followers condemned all vegans as violent psychopaths after Keith’s recent encounter with a spicy pie this weekend, a handful of animal rights activists were peacefully distributing leaflets that strongly disputed some of The Vegetarian Myth’s many inaccuracies and misleading claims.

Her book is a dangerous collection of straw man arguments, poorly-sourced pseudo-science, and outright lies. Discrediting the book will be easy, but it will work best with many people working together. To accomplish this, we have purchased the domain www.VegetarianMyth.com and will soon be launching a closely-moderated wiki (or similar site) to crowd-source the vegan critique of the book.

If you are interested in helping make this happen in any capacity, please contact VeganSustainability@gmail.com.  We are in need of web space, design, and writers. Eventually, we hope to include fact-checking and criticism of other animal rights opponents like Elliot Coleman, Michael Pollan, and the Weston A. Price foundation.

The content from the original flier is available below and also in PDF format here. Please spread this message and the flier to anyone who may be interested.

Vegans for Sustainable Agriculture
www.VegetarianMyth.com | The Truth About The Vegetarian Myth
A Crowd-Sourced Response to Lierre Keith & Other Opponents to Animal Rights

The Claim: Lierre claims that grazed animal farming/polyculture can feed nine people per ten acres. (P. 101)
In Reality: Lierre lists the food produced on a ten acre perennial polyculture. Her numbers are based on Michael Pollan's exposition of Joel Salatin's Polyface Farm in The Omnivore's Dilemma, and are arrived at by dividing the numbers for Salatin's 100 acres of grass by ten. But Pollan explains at great length (P. 222-225) that the 100 acres of grass is actually 550 acres because the adjacent 450 acres of forest are essential to the health and productivity of the farm. Accordingly, ten acres of land actually feeds about two people rather than her estimate of nine. Lierre says that if you live in New England you should eat what grows there. However, with this level of productivity, you couldn't feed all of New England on all the land in New England.

The Claim: "I built my whole identity on the idea that my life did not require death...Did the lives of nematodes and fungi matter? Why not? Because they were too small for me to see?" (P. 18)
In Reality: This straw man argument permeates throughout the book. These views are not held by most vegans nor any animal advocacy groups. The goal of veganism is to eliminate direct, unnecessary suffering at the hands of humans—not to magically end all death. Why shouldn't the cow with its undeniable ability to feel pain, experience emotions and form relationships take precedence over plants and organisms with limited or non-existent nervous systems such as the nematodes Keith frets about in this book?


The Claim: Lierre claims that sustainable farming is not possible without domesticated livestock. "I would need domesticated animals—their labor and the products of their bodies—to farm sustainably. I needed their manure and their unspeakable bones, their inconceivable blood." (P. 58)
In Reality: How then does she explain the success of vegan organic agriculture in the UK and US, where no animal inputs are used? How does she explain that the most successful organic CSA in the country actually uses no animal products on their fields (Honey Brook Farm in New Jersey)?


The Claim: "Understand: agriculture was the beginning of global warming. Ten thousand years of destroying the carbon sinks of perennial polycultures has added almost as much carbon to the atmosphere as industrialization, an indictment that you, vegetarians, need to answer. No one has told you this before, but that is what your food—those oh so eco-peaceful grains and beans—has done." (P. 250)
The Reality: Much of Lierre's book is borrowed from Richard Manning, a well-respected environmentalist and author. Manning understands that human dependence on grain monoculture is not the fault of the small percentage of concerned people who decided to be vegetarian, but is rather a historical mistake of which we all share the burden of repairing. Despite Lierre's insistence, vegans do not need to eat grains nor any sort of annual monocrop. Why did she target vegans when compared to average corn-fed Americans, vegans consume much less grain?
On the topic of climate change, Lierre fails to address that regardless of type of feed or forage, ruminant animals emit an abundance of methane, a greenhouse gas up to 72-times more potent than carbon-dioxide. She, along with other grass-fed proponents, point out that growing pasture sequesters carbon in the subsoil and claim that farms like Polyface are carbon-neutral. However, she ignores the fact that soil can only retain a limited quantity of carbon—once pasture is healthy, the soil is carbon stable. Meat from pasture-based livestock contributes at least as much to climate change as meat from CAFOs—an indictment that you, Lierre, need to answer.

The Claim: "We’ve been doing what we’ve been endlessly badgered to do since the 1960s. We’ve eaten, according to the USDA, less fat, less meat, fewer eggs. Our dietary fat has fallen 10 percent, hypertension has dropped 40 percent and the number of us with chronically high cholesterol has declined 28 percent." (P. 203)


The Claim: "We owe our bodies what we owe the world; we must inhabit both and, in the act of inhabiting, nourish both. This food must also be an apology for what my kind has done, and part of the repair. It must protect this land, and extract from me the promise of more. My food is those things, all of them. It’s based on the forests and grasses that nestle this planet in soil and air." (P. 271)
In Reality: Lierre's own blog posts demonstrate that she can't stick to her own ideals. She has posted entries where she raves about the perfection of grain-fed pork and happily offers a bucket of mass-produced, processed chocolate laden with factory-farmed dairy to trick-or-treaters last Halloween. If this is what she'll post on her own blog, what other unsustainable foods is she eating? (http://tinyurl.com/lierre1, http://tinyurl.com/lierre2)


The Claim: "...there are no good plant sources of tryptophan. On top of that, all the tryptophan in the world won’t do you any good without saturated fat."  And later Keith blames the lack of tryptophan in vegetarian diets for depression, insomnia, panic, anger, bulimia and chemical dependency. (P. 10)
In Reality: A cup of roasted soybeans contains nearly three times the adult RDA of tryptophan and a cup of pretty much any other bean will get you between 50-60% of the RDA. Two tablespoons of coconut oil more than meet the adult saturated fat RDA. Nuts, dark chocolate and avocado are all rich in saturated fat.

In Reality: The soy milks available in supermarkets have about 6 to 11 grams of soy protein per cup. According to Lierre’s often-cited Weston A. Price Foundation, a cup of soy milk contains only 20 mg of isoflavones.


The Claim: "I am of this world, carbon and breath like my parents, my siblings, the creatures great and small, single-celled or green, that create the miracle the rest of us consume. They gave me this body and the air it needs, the food it eats. All they ask is that I take my place, a predator, dependent and beholden, until I am prey." (p. 271)
In Reality: The animals humans consume are quite literally prey, but unless Keith intends to be eaten by a wild animal, her claim of being "prey" is a specious one based on her decomposition. She considers this a repayment to the biosphere for its kindness in feeding her, but that same repayment is unacceptable from edible animals.


The Claim: Lierre claims that "Researchers from Cornell showed that E. Coli 0157:H7 could be stopped by a very simple action: feeding cows hay for the last five days of their lives." (P. 99)
In Reality: In the study Lierre refers to, the researchers showed that overall E. Coli levels (i.e. including strains other than 0157:H7) in three cows were decreased by feeding the cows hay for five days. They conjectured that 0157:H7 levels would be similar. However, subsequent research suggests that grass-fed beef does not have lower levels of 0157:H7 (http://www.slate.com/id/2242290/pagenum/all/).


The Claim: "The pursuit of a just, sustainable, and local economy will eventually lead us to the grim conclusion that there are simply too many of us. The world population is supposed to reach 8.9 billion by 2050. Meanwhile the oceans will be fished empty by 2050, the aquifers and water tables will be well out of reach, and the last trace of topsoil rendered dust. We are already living on fossil fuel and this—right now—is the historical moment when oil will peak. It will never be this cheap or accessible again. What then?" (P. 120)
Counterpoint: Keith has no answer to "What then?" The only answer one can deduce from the book is that she advocates nothing short of the elimination of agriculture and civilization and a drastic reduction of population to some level that she considers sustainable. Simultaneously, she believes that civilization's doom (and consequently, an enormous loss of human life) will soon be upon us, so maybe it makes sense that her ideas are not solutions.


The only thing worth taking from The Vegetarian Myth is Lierre’s condemnation of the idea that the simple act of going vegan automatically solves all problems with our food production. True, some vegans and organizations do exaggerate the ecological benefits of eating highly processed, conventionally-grown vegan food. That said, it is still the easiest and most substantial immediate action a person can take on the path to a sustainable lifestyle.  Into the future, a balanced plant-based diet of mixed perennial and annual fruits, vegetables, nuts and legumes grown in veganic permaculture settings is our only hope for feeding an increasing population.

Plants for a Future: http://www.pfaf.org

Add Your Comments
Latest Comments
Listed below are the latest comments about this post.
These comments are submitted anonymously by website visitors.
TITLE
AUTHOR
DATE
Supplements are supplements
kervennic
Did you mis-read your own citation?
Jared
Why ask vegans to promote unnecessary suffering?
Vanilla Rose
Fake Veg*ns - Why do they do it?
Vanilla Rose
Peak oil and human population reduction
Teach immigrants to be like Native Americans
re: Wild meat will ALWAYS be nutritionally superior to domesticated meat!!
fantasy island
We need quantitative mechanisms description, not claims and disclaim
kervennic
Mussels are not eaten by vegans for religious reason
kervennic
In defense of Lierre Keith & hunter/gatherer lifestyle
Returning to indigenous eco-sanity
Keith lies and lies
bad science
Support Independent Media
We are 100% volunteer and depend on your participation to sustain our efforts!