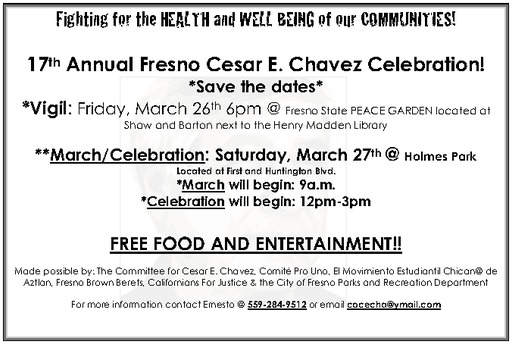 Import event into your personal calendar
Date:
Saturday, March 27, 2010
Time:
9:00 AM - 3:00 PM
Event Type:
Other
Organizer/Author:
Ernesto
Location Details:
The 17th Annual Cesar E. Chavez Celebration will be taking place at Holmes Playground located between FIRST and HUNTINGTON across from FIESTA FOODS.
March 31st marks the birth of labor and civil rights leader Cesar E. Chavez. On this day people in across the U.S. and in beyond will be celebrating Chavez’ life work. In April 23, 1993, Cesar E. Chavez passed way in his sleep in San Luis, Arizona. A funeral services was held in Delano, California where Cesar had planted the first seeds of the UFW. Chavez is remembered as a crusader for nonviolent social change, spiritual figure and environmentalist. In commemoration of his life, communities across the nation have named schools, parks and streets in his honor. A group in Fresno also organized to rename Kings Canyon Street to Cesar Chavez Blvd. The name change did not happen, due in large part to reality the corporations, employers, and agencies he worked so hard to reform also called the Central Valley home. Nonetheless, out of this effort, a committee was formed that has since reconvened annually to organize a community celebration to commemorate the legacy of Chavez. The committee’s first organizers took on the name “Comite Cesar Chavez” (Cesar Chavez Committee), and took the first syllables of each word to form the acronym Co-Ce-Cha, meaning harvest. The committee has always been a mix of community members, activist, and college students dedicated to grass root organizing. This year, the committee is dedicating the march to the health and well being of our community, and call for dignified job opportunities, that provide health care and living wages, as well as sustainable healthy environments, with accessible parks, safe communities, and environments free of contamination.

MARCH with us on Saturday, March 27th, 2010 to celebrate the legacy of Chavez and show your local representatives we want and can make a difference in the health and well being of our community. The gathering to march begins at 9:00am at Holmes Playground, where we will march through South East Fresno neighborhoods. The march will end back at Holmes playground where local musicians and performers will showcase our diverse community. Co-Ce-Cha is also hosting a community fair, where local organizations and services will be at hand to help inform and support people. Come and learn how the legacy of Cesar Chavez has inspired youth and adults to continue fighting for social justice. The event is completely free of charge and includes food and prizes.
Added to the calendar on Mon, Mar 15, 2010 12:13PM
Add Your Comments
Support Independent Media
We are 100% volunteer and depend on your participation to sustain our efforts!