Mary Gaitskill and Jerry Stahl at Writers With Drinks 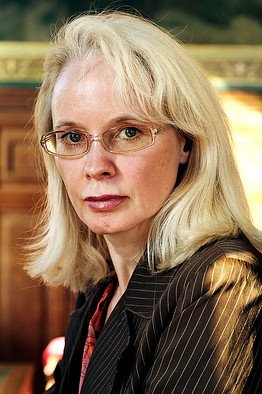 Mary Gaitskill is the author of Don't Cry, Veronica, Because They Wanted To, Two Girls, Fat And Thin, and Bad Behavior. The movie Secretary was loosely based on her story of the same name in Bad Behavior.

Jerry Stahl is the author of the novels Pain Killers, I, Fatty, Plainclothes Naked and Perv: A Love Story. He also wrote the memoir Permanent Midnight, which was made into an acclaimed movie.

Alli Warren is the author of the chapbooks Well-Meaning White Girl, Schema, Yoke, Hounds, Cousins, No Can Do [PDF], and with Michael Nicoloff, Bruised Dick.

Dylan Landis is the author of Normal People Don't Live Like This. Her stories have won numerous awards and appear in Bestial Noise: The Tin House Fiction Reader and Best American Nonrequired Reading 2003.

Michael Shea's latest book is The Extra. He's also the author of A Quest For Simblis, Nifft The Lean, The Color Out Of Time, In Yana, The Touch Of Undying, Fat Face, I, Said The Fly, Polyphemus, The Mines Of Behemoth, and The A'Rak.


About guest host Beth Lisick:
Beth is the author of Everybody Into The Pool and Helping Me Find Myself. She co-organizes and co-hosts the Porchlight reading series. She's one half of the Mitzi and Carole comedy duo, with Tara Jepsen.

About Writers With Drinks:
Writers With Drinks has won "Best Literary Night" from the SF Bay Guardian readers' poll five years in a row and was named "Best Literary Drinking" by the SF Weekly. The spoken word "variety show" mixes genres to raise money for local worthy causes. The award-winning show includes poetry, stand-up comedy, science fiction, fantasy, romance, mystery, literary fiction, erotica, memoir, zines and blogs in a freewheeling format.
END_OF_DOCUMENT_TOKEN_TO_BE_REPLACED
Added to the calendar on Sun, Mar 7, 2010 9:33PM
Add Your Comments
Support Independent Media
We are 100% volunteer and depend on your participation to sustain our efforts!