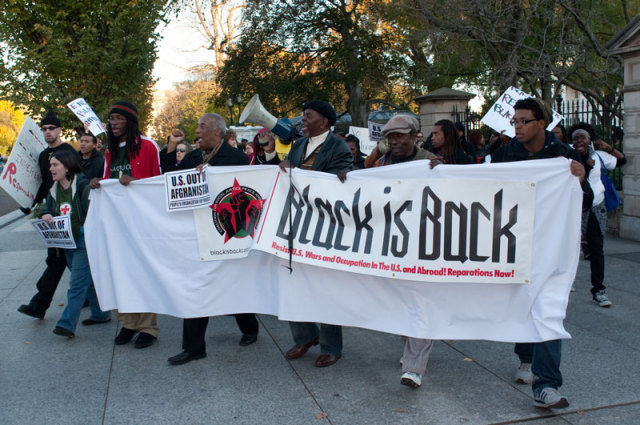 Yeshitela is the leader and founder of the Uhuru Movement and the African Socialist International and will speak on Obama’s continuation of imperialist wars, how Obama has taken advantage of the earthquake in Haiti to reinforce occupation of that country, and the struggle of African people inside the U.S. to challenge police occupation and violence, massive imprisonment, foreclosures and poverty.

Also featured will be Penny Hess, Chairwoman of the African People's Solidarity Committee and author of Overturning the Culture of Violence addressing the role of solidarity with the African liberation movement connecting the black community here with the people of Haiti and African people everywhere.

Find out how you can participate in the Africa’s Resources in African Hands Solidarity Action Network to raise resources for real self-determination programs of the Uhuru Movement, building a new world.

A march will also take place prior to this event on Saturday, March 20th in San Francisco under the banner of victory to the oppressed! Come join us promote victory to the Iraqi, Afghani, African and all oppressed peoples struggling for freedom, justice and a sustainable future and participate in other events throughout the week.

END_OF_DOCUMENT_TOKEN_TO_BE_REPLACED
Added to the calendar on Thu, Mar 4, 2010 8:19PM
Add Your Comments
Latest Comments
Listed below are the latest comments about this post.
These comments are submitted anonymously by website visitors.
TITLE
AUTHOR
DATE
RSVP and Spread the Word on Facebook for this Event!
Wendy Snyder
Support Independent Media
We are 100% volunteer and depend on your participation to sustain our efforts!