Meanwhile the US, France, UK, UN, and African Union all have been quick to condemn the coup. Tandja did the bidding of U.S. imperialism, meanwhile, according to the UN Development Program’s 2006 Human Development Index, Niger is the poorest country in the world. Sixty percent of the population lives on less than a dollar a day, life expectancy is only to 45-years old, and adult illiteracy is 71%. 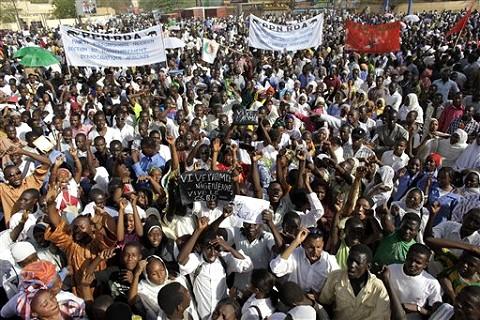 On February 18th the dictatorship of Mamadou Tandja was overthrown in Niger in a military coup. The new government is calling itself the Supreme Council for the Restoration of Democracy (CSRD) and is headed by Salou Djibocalls. He has promised to "make Niger an example of democracy and good governance". In addition, he has said, "We call on national and international opinions to support us in our patriotic action to save Niger and its population from poverty, deception and corruption..."

On February 20th 10,000 people came out to rally in support of the coup in Niger’s capital city of Niamey. Human rights organizations, trade unions, and opposition parties, including the Niger Party for Democracy and Socialism, are all supporting the coup.

Meanwhile, as the people in Niger celebrate the overthrow of the dictatorship, the US, France, UK, UN, and African Union have all been quick to condemn the coup. The corporate media has made statements like this one found in an AP article, “The ease with which Niger's democratic institutions have been swept aside has marked a setback for a region struggling to shake off autocratic rulers.”

Yet, the overthrow Mamadou Tandja certainly is nothing to mourn, nor was there anything democratic about it. Tandja had dropped all pretenses of even bourgeois democratic rule. In addition, Tandja's pro-capitalist privatization policies have caused starvation and extreme poverty.

Tandja’s moves towards dictatorial rule started in 2009 when he declared an emergency and rule by decree. Tandja assumed the power to jail reporters deemed a "threat to the country". He also attempted to create a new Senate where one third of the members were to be appointed by him. The Niger Party for Democracy and Socialism called these moves a coup d'etat. In response, Mamadou Tandja dissolved the National Assembly in May 2009. In July, Tandja dissolved the courts for not following his dictates. With the courts, National Assembly, and press out of his way, Tandja held a referendum in August that extended his term by three years. The referendum was boycotted by the opposition. While there has been a lot more seething under the surface than just the question of term limits, there is no doubt that the people of Niger wanted Mamadou Tandja out of power.

Like the February 20th rally of 10,000 supporting the overthrow of Tandja, the moves towards capitalist dictatorship under Tandja’s rule brought 10,000 people out in the streets to protest against him. All seven of Niger's labor federations participated in these actions as part of the Co-ordination of Democratic Forces for the Republic (CFDR). In contrast, this writer hasn't seen any reports of pro-Tandja demonstrations.

Besides the moves towards direct capitalist dictatorship, also simmering under the surface is the fact that foreign companies are enriching themselves from Niger's rich uranium mines, yet according to the UN Development Program’s 2006 Human Development Index, Niger is the poorest country in the world. Sixty percent of the population lives on less than a dollar a day, life expectancy is only to 45-years old, and adult illiteracy is 71%.

The pro-imperialist government of Mamadou Tandja followed the dictates of the IMF and World Bank to the point of even privatizing food distribution, causing massive starvation. Likewise, he allowed foreign mining interests to profit from Niger’s rich uranium mines at the expense of the environment and at the expense of harsh exploitation of workers, while giving very little in return to Niger. Workers in these mines are not informed of the risks, not given basic protections, and not given treatment as they develop lung cancer. Primary ownership and operation of uranium mines in Niger is by Areva, a global giant in mining that controls the SOMAÏR and COMINAK operations in Niger.

Mamadou Tandja did the bidding of imperialism and foreign capitalism. Now that he is overthrown, foreign imperialist governments are quick to condemn his overthrow. And, if the new government appears to be ready to follow through on its promise of economic justice, imperialism is likely, as has been the pattern in Africa, to intervene against the new government. The promises of the new government, of course, could all be lies, but it could also indicate possible changes for the better coming as a result of the coup. If the Council is serious about making these promises a reality the coup could mark the opening of a social revolution in Niger and, under those conditions, it is very important that the international working class and anti-imperialist movements oppose any potential intervention by the US, France, UK, UN, or the African Union.

Presently, the whole country of Niger is an example of the failure of capitalism. The only way the new government can follow through on their promise of economic justice will be through overthrowing the capitalist system and pursuing socialist policies. If they even begin to take any moves in this direction they will face the wrath of imperialist blockade and other imperialist intervention. Niger does not have the needed economic and military strength to make it on its own. To succeed, they will need to pursue a revolutionary socialist and anti-imperialist program for all of Africa that sees the need for the formation of a united socialist federation of republics in Africa.

An attempt was made at revolutionary Pan-Africanism in the 1960s. Leaders of this movement included Kwame Nkrumah and Patrice Lumumba.

Kwame Nkrumah, the President of Ghana, advocated the need for Africa to unite to bring together Africa’s rich resources and strengths for a strong economy and to be better able to stand up to European and American imperialism. Unfortunately, as declassified documents show, Kwame Nkrumah was murdered as a result of a coup carried out by the CIA with the help of Britain and France.

Like Kwame Nkrumah, Patrice Lumumba was a Pan Africanist and target of imperialism. He was the democratically elected president of the Congo. Patrice Lumumba was overthrown by CIA and Belgian operations and murdered by the Belgian imperialists after being taken prisoner in a coup. As a result of that coup, the horrible U.S. backed dictatorship of Mobutu was put in power in the Congo for nearly 32 years.

Nkrumah and Lumumba recognized that all African borders are purely artificial. They were drawn up without regard to nationality by the European colonial powers. Niger is a good example of this fact. The ethnic groups of Niger are the Zarma, Hausa, Kanuri, Toubou, Tuareg, and Wodaabe Fula. The land of the Hausa, Kanuri, and Tuareg were split by still existing colonial borders into separate countries. The same is true with other colonies elsewhere, for instance Afghanistan is made up of many nationalities, and one of the primary nationalities, the Pashtun, had their land divided between Pakistan and Afghanistan. Likewise, the imperialist powers divided the Kurdish people between Turkey, Iraq, Iran, and Syria.

European powers not only ignored the natural national boundaries in Africa, they also purposely created animosities and / or prolonged them, by giving certain national (tribal) groups privileges over others. As the Germans used to say about the tribes in the Balkans, the strategy is "divide and conquer". The domination by the Zarma in Niger, coupled with anger over the destruction and exploitation caused by uranium mining, has been a cause of armed conflict against Tandja’s government. This has been carried out by the Niger Movement for Justice (MNJ). The MNJ, fighting since 2007, is made up of the Tuareg, Toubou, and Fulani nationalities. Besides demanding a say in how uranium mining is carried out and a piece of the wealth extracted by these foreign owned countries, they are demanding an independent country they call Azawad in the lands where Tuaregs, Toubou, and Fulani are the majority. The territory claimed for Azawad encompasses portions of present day Niger, Mali, and Algeria.

In response to the MNJ’s demands, Tandja’s government issued a national press ban on reporting on the issue and had a policy of non-negotiation with the rebel forces. A truly revolutionary government will recognize the just demands of the MNJ. It will take the control of the uranium mines away from French capitalists and put them in the hands of the Nigerien working class. Through this new workers democracy a fair distribution of the wealth produced through mining can be achieved and environmental decisions can be made based on human needs rather than corporate profit. As a further step, the right of the people Azawad to national autonomy should be recognized and supported in Niger, Mali, and Algeria and promoted as part of building a federation of socialist republics across Africa that respects and recognizes language rights and other national rights.

Recognition of the right of African countries to national self determination in the US, UK, and France, is also essential. The quick condemnation by the United States government of the overthrew the Tandja dictatorship is in stark contrast to the continued support the U.S. has given to the June 2009 coup in Honduras that overthrew democratically elected President Zelaya. Zelaya was mostly a rightwing president, but he left the confines of what was acceptable to U.S. imperialism by raising the minimum wage (affecting U.S. corporations with maquiladoras in Honduras) and by making the “mistake” of being friendly to U.S. enemy Venezuela. The U.S. supported coup government in Honduras has since brought back the death squads, eliminated all freedoms of press, and held a fraudulent election boycotted by the people, but recognized by the United States. From Africa to Central America and the Middle East, U.S. intervention is for one purpose and one purpose alone, the defense and continuation of U.S. corporate profit.

This support for the death squad Honduran coup leaders and quick opposition to the overthrow of Tandja both come from the supposedly leftist Obama administration. Yet, the pro-war, pro-imperialist, corporate healthcare, pro-death penalty policies of Obama coupled with tax give-aways to the richest financial capitalists place Obama’s administration squarely on the right. The need is clear, a workers party in the United States that seeks full employment, healthcare, workers’ democracy, a healthy environment, and an end to rapacious U.S. imperialism through the building of mass movements, strong unions independent of the Democrats, and ultimately through socialist revolution in the United States.