by Dan Bacher
You can expect political influence by corporate giants like the Resnicks to increase even more, due to the recent 5-4 Supreme Court decisions that blocks bans on corporate spending for political candidates. 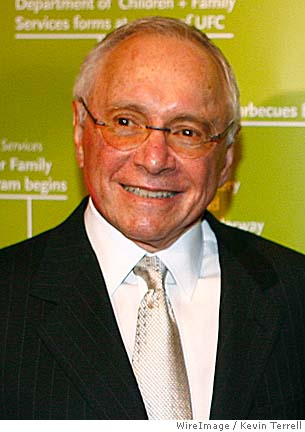 Stewart Resnick, the Beverly Hills agribusiness tycoon who owns 115,000 acres of farmland in Kern County, appears to be putting his bets on Jerry Brown as the winner of the gubernatorial race in the November election - even though Brown hasn't officially declared himself as a candidate.

On November 11, 2009, Resnick and his wife, Lynda, the co-owner of the giant Paramount Farms and Roll Corporation, wrote four checks totalling $50,000 for the Brown campaign.

The donations that the Resnicks made to Brown to date exemplify the enormous political influence of Resnick and other water barons exert over California water politics. The Resnicks are the largest tree fruit growers in the world.

Delta advocates fear that campaign contributions from the Resnicks and other big water interests could heavily influence Brown's positions on the peripheral canal, the construction of more dams and the November $11.1 billion water bond. They also fear the Resnicks could pressure Brown to support legislative and administrative attacks on federal plans protecting Delta smelt and Central Valley salmon.

The Resnicks and executives of their companies have donated $3.97 million to candidates and political committees since 1993, mostly in the Golden State, a California Watch review of public records shows, according to the Center for Investigative Reporting, December 6, 2009.

Roll International, one of the largest private water brokers in the U.S., makes millions of dollars in profit off marketing subsidized public water. “Through a series of subsidiary companies and organizations, Roll International is able to convert California’s water from a public, shared resource into a private asset that can be sold on the market to the highest bidder,” according to Yasha Levine in “How Limousine Liberals, Water Oligarchs and Even Sean Hannity are Hijacking Our Water" (http://www.alternet.org/story/144020/how_limousine_liberals%2C_water_oligarchs_and_even_sean_hannity_are_hijacking_our_water_supply/).

Resnick was heavily involved in the creation of Kern County Water Bank — a controversial underground water storage facility in the southern San Joaquin Valley. The Westside Mutual Water Company, owned by Resnick, now owns 48 percent of the bank. One of the reasons why Central Valley reservoirs were drained so low over the past few years was to fill the water bank and southern California water reservoirs.

The Resnicks have also written big checks to the campaigns of Governor Arnold Schwarzenegger, Senator Dianne Feinstein, and presidential candidates from both parties in the 2008 election. They contributed a total of $271,990 to Schwarzenegger’s campaign coffers. They haven’t contributed to the Republican candidates for Governor, Meg Whitman and Steve Poizner yet, but don’t be surprised if they do.

In response to my emailed questions about Brown's positions about the peripheral canal, new dams, the water bond and the biological opinions, I received the following response from "Ned," a staffer from Jerry Brown 2010.

"Thank you for your email," "Ned" stated. "While Jerry is considering a potential run for Governor, he is not a declared candidate. He has said that he will make a decision on the Governor's race by the filing deadline in March, until that time he is focused on his job as Attorney General. Should he declare a run for Governor, he'll begin to address all the issues and concerns that Californians will find important in choosing their next Governor."

Bill Jennings, executive director of the California Sportfishing Protection Alliance (CSPA), quipped about Resnicks’ contributions to Brown and others. “Resnick is an equal opportunity contributor to candidates seekers. He gives money to everybody – it doesn’t matter if they’re Republican, Democrat or the Anti-Christ, he’ll try to buy their votes.”

“For Brown to say that he doesn’t have a position on the issues and then to accept major contributions from a guy involved heavily in water politics like Resnick is highly disingenuous,” said Barbara Barrigan Parrilla, campaign director of Restore the Delta. “The contribution to Brown is a prime example of how big agribusiness influences both political parties.”

Brown signed the original legislation that authorized the original peripheral canal bond in 1982, but voters overwhelmingly defeated the canal at the ballot box that November.

Brown hasn’t indicated his position now on the canal and new dams, but the other candidates have. Meg Whitman is a strong supporter of the peripheral canal, more dams, and increased Delta pumping.

“She acknowledged the ‘humanitarian disaster’ resulting from 35-percent unemployment in some west valley towns and the threat to a region that grows a huge portion of the nation’s food,” according to Whitman’s Website, reporting on her visit to Fresno on May 29, 2009. (http://www.megwhitman.com). “As governor, she said she would stick with her conviction that saving jobs takes precedence and would use emergency powers to order more pumping from the Delta. In the longer term, she supports more above- and below-ground storage facilities and the construction of a peripheral canal in addition to conservation efforts.”

Poizner is also a big backer of the peripheral canal. In an interview with the Bakersfield Californian on April 30, 2009, he stated, “I do support more above-ground storage and I do support more water conveyance systems to get the water from where it is to where it needs to go, without completely destroying the delta.”

The recent National Academy of Sciences Delta Panel held in Davis from January 24-28 illustrated the influence of the Resnicks’ money upon political decisions. Because of a letter that Stewart Resnick wrote to Senator Diane Feinstein, Feinstein pressured the Obama administration to conduct the review of the biological opinions protecting Central Valley salmon and Delta smelt.

In the letter of September 4, Resnick claimed that the biological opinion to prevent endangered salmon and smelt from becoming extinct was "exacerbating the state's severe drought" because it reduced the water available to irrigate farmland. He claimed that "sloppy science" by federal fishery agencies had led to "regulatory-induced water shortages." "I really appreciate your involvement in this issue," he stated.

The administration invited representatives of corporate agribusiness, including Resnicks’ Astroturf group, the Coalition for a “Sustainable” Delta, and Southern California water districts to testify, but they invited no representatives of recreational fishing groups, commercial fishing organizations, Delta farming groups, California Indian Tribes and environmental justice communities, the people most impacted by fish collapses.

The NAS Panel is a typical example of the “pay to play” corruption endemic to California and U.S. politics. The Resnicks and associates have contributed $29,000 to Feinstein and $246,000 more to Democratic political committees during years when she has sought re-election.

Senator Feinstein is now proposing an amendment to a jobs stimulus bill that, in effect, would suspend rules that protect salmon and other imperiled fish from being killed by the giant state and federal pumps in the Sacramento-San Joaquin River Delta. She is doing this at a time when Central Valley salmon populations have collapsed to a new record low. The Pacific Fisheries Management Council (PFMC) on February 11 reported that only 39,530 Sacramento River fall Chinook salmon returned to spawn in 2009.

"No hearings have been held on Senator Feinstein’s proposed amendment," said Steve Evans, conservation director for Friends of the River. "No written version of the amendment is available for review by the public. This is not the way to conduct public policy!"

Corporate agribusiness and their political allies are also pushing for the approval of a water bond that, combined with the water policy package passed by the California Legislature in November, creates a clear path to the construction of the peripheral canal or tunnel and Temperance Flats and Sites reservoirs.

Senate President Pro Tem Darrell Steinberg (D-Sacramento), who received $15,600 for his 2010 campaign from the Resnicks on July 30, 2009, strong-armed the water package through the Legislature in spite of strong opposition from his constituents and environmental, fishing and Delta farming groups.

The canal will cost $23 billion to $53.8 billion to build at a time when California is in its worst economic crisis since the Great Depression - and the budgets for teachers, game wardens, health care for children and state parks have been slashed.

Unfortunately, you can expect political influence by corporate giants like the Resnicks to increase even more, due to the recent 5-4 Supreme Court decision that blocks bans on corporate spending for political candidates.

For a complete list of Resnick’s contributions, go to http://californiawatch.org/data/resnick-and-associates-spend-nearly-4-million-campaigns. For action alerts and updates, go to http://www.restorethedelta.org.
Add Your Comments
Support Independent Media
We are 100% volunteer and depend on your participation to sustain our efforts!