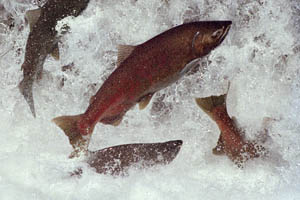 "The 2009 adult escapement estimate is the lowest on record and continues the declining trend in SRFC escapement despite the 2008 and 2009 closures of nearly all ocean Chinook fisheries south of Cape Falcon," according to the PFMC report.

In 2008, a record low of only 66,000 fall-run fish returned to the Sacramento, American, Feather and Yuba and other Sacramento Valley rivers. The minimum escapement for long term sustainability of these fish is 122,000.

State and federal biologists had predicted that 122,196 fish would return to the Sacramento in 2009, so the actual returns were less than one-third of the number forecasted. The Sacramento run, the driver of West Coast salmon fisheries, numbered nearly 800,000 fish in 2002.

"This year's Sacramento River fall Chinook adult return is a terrible disappointment," said Neil Manji, DFG Fisheries Branch Chief. "Over the past two years, DFG has collected and analyzed data and worked diligently to figure out what steps can be taken to improve our stock management, increase future returns and help craft fishing regulation packages."

Ocean salmon fishing seasons are based on the return of adult and jack salmon to the rivers - and it's very doubtful that there will be a season this year, based on the low numbers of spawning fish in fall 2009. "There's not going to be any season this year from these numbers," said Zeke Grader, executive director of the Pacific Coast Federation of Fishermen's Associations..

Federally protected runs of winter and spring run chinook both came in at less than 5,000 individuals each, according to the PFMC. Spawner escapement of endangered winter Chinook salmon in 2009 was estimated to be 4,483 adults and
54 jacks, while the escapement of spring Chinook 2009 totaled 4,506 fish (jacks and adults).

The San Joaquin River is in particularly bad shape, with just under 2,100 fall Chinook salmon representing perhaps the last of their race in that watershed.

“Salmon have been part of California for thousands of years and this report shows we’re losing them,” said Zeke Grader, executive director of the PCFFA. “If we wipe our salmon out, we’ll also be wiping out generations of fishing families from the central California coast to northern Oregon that have all relied on king salmon from the Sacramento River to make a living."

He asked, "Why are San Joaquin agricultural operators selling their water to southern California developers and then demanding more water from the Delta?”

The last three years of salmon returns have each set new record lows and coincide directly with three of the highest years of Delta water diversions, according to Grader. Delta pumping kills juvenile salmon migrating through the Delta to the sea. It takes three years for surviving salmon to return as adults and for scientists to record the full destruction caused by the pumps.

“We’re watching our salmon disappear in exact concert with a 16 percent increase of Delta water diversions over the last decade,” said Dick Pool, administrator of water4fish.org. “The full throttle pumping of Delta waters is wiping out valuable salmon worth over a billion dollars to the commercial and sport fishing sectors.”

Pool noted that with near-record export pumping in the spring, it is no surprised that millions of salmon smolts were pulled through the Delta Cross Channel Gates and Georgiana Slough into the Central Delta.

"There is no cover, little food and lots of predators in these rip-rapped channels and most of the fish are gone by the time the water makes it to Clifton Court Forebay," said Pool. "Between river and Delta losses, 92 percent of the smolts perish. With only 8 percent surviving, we will never recover these species until the Delta is fixed."

Pool said that salmon runs and many other fish species in the Delta collapsed in 2007 after a dramatic increase in pumping of water to points south. As a result, regulators closed all ocean fishing of chinook salmon in California and most of Oregon in 2008 and 2009, with the exception of a 10 week season for chinook off northern California and southern Oregon in 2009, to save the remaining salmon. Although the seasons were closed, the collapse had nothing to do with recreational or commercial fishing pressure.

Governor Arnold Schwarzenegger, agribusiness "Astroturf" groups including the Latino Water Coalition and Coalition for a Sustainable Delta and right wing talk show hosts such as Sean Hannity have falsely portrayed the battle to restore salmon and other fish by curbing Delta exports as a conflict over "fish versus jobs."

"Southwick Associates have estimated that the season closures have cost an estimated 23,000 jobs and $2.8 billion in the California economy alone," said Pool. "California has over 2,000 small and medium businesses that derive most or all of their income from the recreational and commercial salmon industry."

"Behind those statistics lies enormous suffering by families along one thousand miles of Pacific Coast," said Grader. "Boats are tied up on docks, marina businesses have closed, homes have been lost to foreclosure. West Coast restaurants that once featured locally caught salmon are increasingly turning to imported fish as local harvests decline."

In contrast, agricultural employment in the seven county area impacted by new pumping restrictions intended to protect fish was actually up between 2008 and 2009, and the California almond industry had record shipments of 1.39 billion pounds in 2008-2009, up 10 percent over 2007-2008. "Over the same period, the Oregon and California salmon industries experienced near total shutdown," stated Grader.

On average, San Joaquin Valley agricultural contractors received 80 percent of their contract allocations last year, although there were some localized shortages primarily due to drought. In comparison, average Westside deliveries in the past two decades have been about 60 percent of full allocations.

The "Astroturf" campaign by corporate agribusiness to increase Delta exports, build a peripheral canal and construct more dams has promoted the myth that crops grown on toxic, drainage-impaired land on the west side of the San Joaquin Valley "feed the nation" or "feed the world."

The corporate media, right wing talk show hosts and even some "alternative" media outlets have bought into this myth in their coverage of the California water wars, portraying the conflict as one between hard-working farmers like those portrayed in the classic Grant Wood painting who only want "feed America" versus "radical environmentalists" who want to protect a "minnow" like the Delta smelt.

An examination of the actual economic data compiled by the U.S. Department of Agriculture (USDA) reveals that there is no basis in fact for the contention that west side farmers are the "backbone" of American agriculture. According to a USDA Chart, US gross farm income in 2008 was around $375 billion.

"That means Westlands' contribution to the nation's food supply (and exports) is about a quarter of a percent," said Lloyd Carter, veteran investigative journalist. When subsidies and the cost to the taxpayers of cleaning up Westlands' toxic drainage are figured in, the contribution of the district to the national agricultural economy is even lower.

As corporate agribusiness continues to promote its "Big Lies" about "fish versus jobs" and "feeding America" in order to stop Central Valley salmon and Delta fish restoration, fishing groups say the key issue in the salmon collapse has been the "reckless" 16 percent increase in delta pumping over the last decade above levels of the 1990s under the Schwarzenegger administration.

It is ironic that as the salmon return numbers were released by the federal government, Senator Dianne Feinstein, announced an "emergency" move "to provide more water to farms and avert further economic catastrophe in San Joaquin Valley" by stripping protections for salmon and Delta smelt.

"I am working to develop an Emergency Temporary Water Supply amendment that will simply allow San Joaquin Valley farmers to plant, hire and harvest for two years by giving them between 38-40 percent of their water allocation totals in a normal water year," said Feinstein.

"Over the last few years, 400,000 acres of farmland have been fallowed, permanent crops uprooted, and tens of thousands of people are unemployed. The situation is untenable," concluded Feinstein.

The increased pumping from the Delta advocated by Feinstein and her faithful campaign contributor, agribusiness giant Stewart Resnick of Paramount Farms, "would indeed finish off a number of native species, help to further destroy the commercial salmon fishing industry in California, and significantly worsen water quality for Delta farmers," according to Barbara Barrigan-Parrilla, campaign director of Restore the Delta

Please call Senator Feinstein's staff at the San Francisco Office and let them know that they need to defend the Endangered Species Act for the fisheries and people of the Delta, as well as the majority of Californians who support strong protection of our state's natural resources.The number is (415) 393-0707.

As Feinstein was waging her war on salmon, four groups on February 8 launched litigation challenging the back door renewal of water contracts by the Westlands Water District. The North Coast Rivers Alliance, Winnemem Wintu (McCloud River) Tribe, Friends of the River and Save the American River Association filed suit in Fresno Superior Court demanding "full public disclosure" of the impacts of Westlands' contract renewals with the U.S. Bureau of Reclamation upon Central Valley salmon, Delta smelt and migratory birds. The groups charge that Westlands is trying to "lock up" over a million acre feet of water a year in exports from the Sacramento San Joaquin River Delta.

“The Winnemem Wintu, a traditional people of California, see the folly of the government’s plans relative to the Delta and pray for people of reason to wake up and help protect the estuary from over pumping and the damage these plans will wreak upon the water and resources of this state,” said Mark Franco, Headman of the Winnemem Wintu Tribe. “Water is the lifeblood of our people and we stand ready to protect it with our colleagues across California’s social justice movement. This rash plan will only serve a few people and will impact the rights of our future generations.”

The report of the Pacific Fishery Management Council report is available at http://www.pcouncil.org/salmon/salsafe09/salsafe09.html

§Coyote Strikes Again
by C-gull
Friday Feb 12th, 2010 9:16 PM
So much coyote medicine and so little time. The news reported today that the Tehama-Colusa Canal Authority has gotten into the fight by filing suit against the Bureau of Reclaimation to attempt to get enough water for north state farms. Farmers against farmers, fisherman against farmers, people against little fish-Coyote is having a real good belly laugh. Maybe if we had Road-Runner in the whitehouse this multi-lawsuit stuff would not be necessary. I have to wonder-does Obama even know what a salmon is or what a real river is supposed to look like?
Add a Comment
Support Independent Media
We are 100% volunteer and depend on your participation to sustain our efforts!