War on the Poor. . . Continues in Fresno

by Mike Rhodes (editor [at] fresnoalliance.com)
A new Fresno ordinance would ban homeless people from standing on medians and asking for money. The Fresno City Council gave tentative approval to the measure at its meeting yesterday. Nonprofit community groups wanting to solicit money from median strips would have to get a permit. Homeless people and their advocates called the measure discriminatory. Photo below: Al Williams and Carissa Phelps hold sign asking for help. 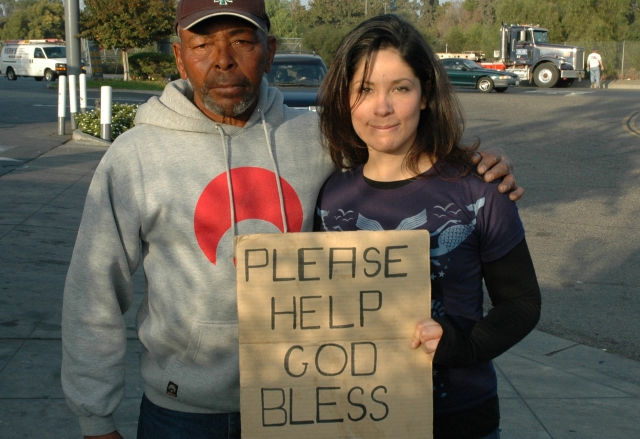 The Fresno City Council has passed, with a 6-1 vote, an ordinance that will remove homeless people from median islands while allowing established community groups to continue using the space for their fundraisers. Bill Simon, the chairperson of the Greater Fresno American Civil Liberties Union, called the measure discriminatory.

Simon said “perhaps Mr. Westerlund was well intentioned when he proposed this median safety ordinance, but on its face it has a discriminatory intent and motive against poor people, especially against the homeless while protecting two popular fundraisers - The Fresno Bee Day for Children’s Hospital and the Firefighters fundraiser. But, the equal protection guaranteed by the Constitution does not allow one set of rules for some people and another set for others. Equal treatment means everyone or no one. If fundraising on a median is unsafe for some, then it is unsafe for all.”

Fresno City Council member Larry Westerland defended his ordinance, saying that if “somebody who wanted to, up to one time every six months, they would be able to come in and there would be a form they would fill out, a one page form, it would be like here is my name, here is the median I would like to occupy on this date, whatever that date would be. We talked about a 48 hour notice before going out there.” Westerlund’s ordinance would require the applicant to pay a filling fee, provide proof of insurance, and require the use of a brightly colored vest.

Al Williams, a homeless man who says he uses the median islands to collect money, said the ordinance would discriminate against the poor. At yesterday’s City Council meeting, Williams said “you all beg for money when you run for office. Each of you all do. What makes you better than me? You know, you are a human being, just like a lot of the people out there are trying to make an honest dollar. Churches beg for money, Kids Day begs for money and the police department and the Fire department begs for money, but you want to criminalize a poor person for asking form money. That is inhumane and despicable.”

The city council voted 6-1 to support the ordinance, with council member Cynthia Sterling in opposition The measure returns to the City Council on February 11 for final approval. It could go into affect 60 or 90 days after that. But it’s likely to face a lawsuit. An attorney with the American Civil Liberties Union of northern California said “parts of the ordinance are likely invalid because they conflict with the California Vehicle Code.” A 2005 Brookings Institute report showed that Fresno has the highest concentration of poverty in the country. The “official” unemployment rate is currently 16.8%
END_OF_DOCUMENT_TOKEN_TO_BE_REPLACED
§Audio Report (3:26 minutes)
by Mike Rhodes
Listen now:
Copy the code below to embed this audio into a web page:
Download Audio (3.1MB) | Embed Audio
END_OF_DOCUMENT_TOKEN_TO_BE_REPLACED
§Kids Day Fund Raiser
by Mike Rhodes 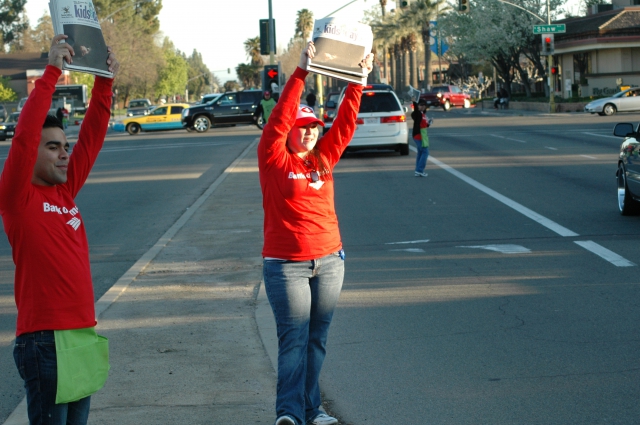 original image (3008x2000)
Under the new ordinance, upscale fundraisers like “Kids Day,” would be allowed to continue. They would be issued a permit. The ordinance, which was passed as a “public safety” measure, would only allow homeless people to apply for a permit once every six months. Council member Westerlund’s ordinance would require the applicant to pay a filling fee, provide proof of insurance, and require the use of a brightly colored vest. This led one homeless advocate in Fresno to update the famous quote by Anatole France. Here is the new version: "The Law (and the City of Fresno), in its majestic equality, forbids the poor as well as the rich to sleep under bridges, and to steal bread. However, it prohibits only the poor to beg in the street---to the rich it issues permits." 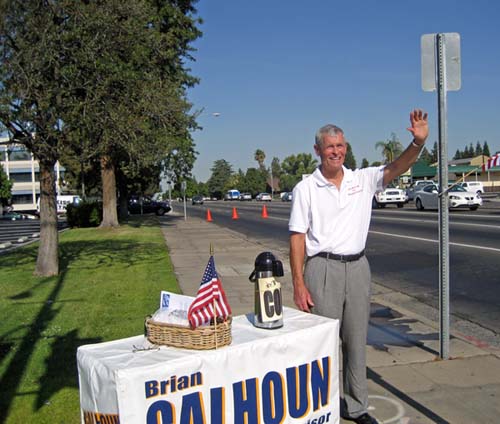 Brian Calhoun (photo above) first introduced an ordinance that would ban anyone from using the median islands about 2 years ago. Calhoun, when he runs for political office, sets up a table on street corners. He was termed out of his Fresno City Council seat and lost his bid for a Board of Supervisors seat in 2008.

END_OF_DOCUMENT_TOKEN_TO_BE_REPLACED
Add Your Comments
Latest Comments
Listed below are the latest comments about this post.
These comments are submitted anonymously by website visitors.
TITLE
AUTHOR
DATE
Addressing Homelessness in Fresno
City of Fresno
Thank You
Long time resident
A response
Mike Rhodes
I have a legitimate question
long time resident
wow, poor man who asked "y'all beg for money; churches beg for money" was eloquent!
marco
Support Independent Media
We are 100% volunteer and depend on your participation to sustain our efforts!