by Sharat G. Lin
The San Jose Peace and Justice Center awarded its Gertrude Welch Peace and Justice Award to pioneers of the Free Gaza Movement who sailed the first small boats to break the Israeli siege of Gaza. The award prompted the city of Milpitas to present commendations and Congressman Mike Honda to award Congressional recognition to the recipients. 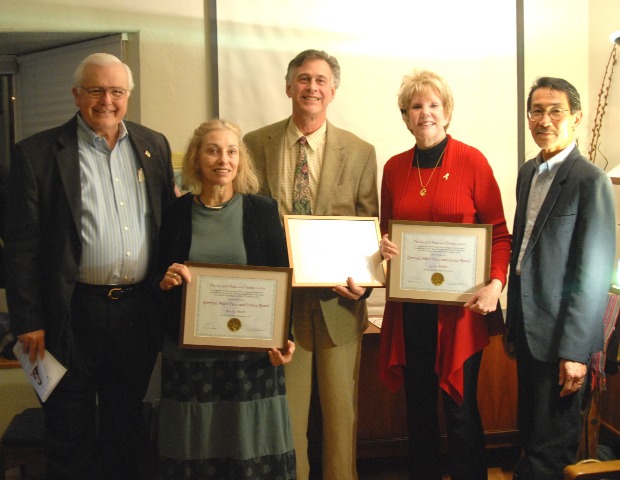 “In recognition of the pioneering vision, courage, and perseverance in establishing the Free Gaza Movement and sailing the first boats to break the Siege of Gaza on the 23rd of August 2008,” reads this year’s Gertrude Welch Peace and Justice Award. The San José Peace and Justice Center presented the award to three pioneers of the Free Gaza Movement in a public ceremony held in Saratoga, California on Saturday, January 30, 2010.

The Gertrude Welch Peace and Justice Award was given to San Francisco Bay Area activists and founders of the Free Gaza Movement: Greta Berlin, Paul Larudee, and Kathy Sheetz.

Greta Berlin started her work on Palestine immediately after the June 1967 war, co-founding PalAid International, one of the first NGOs for Palestine, which raised millions of dollars for medical supplies and equipment. She co-founded the Free Gaza Movement in 2006, and sailed on the SS Free Gaza on the first daring voyage that broke the siege of Gaza in August 2008.

Dr. Paul Larudee, also a co-founder of the Free Gaza Movement, played a critical role in procuring the two small fishing boats for that first voyage and was among the 44 international human rights activists on board. Like Ms. Berlin, Dr. Larudee had previously volunteered with the International Solidarity Movement (ISM), applying non-violent principles to resist Israeli human rights violations. He is also a founder of the Free Palestine Movement, which seeks to challenge Israel's blockade and denial of access to all occupied Palestinian territories by land, sea, and air.

Kathy Sheetz started her human rights work in the 1980s in Haiti. On the first voyage of the Free Gaza boats, she played a crucial role as a nurse in caring for passengers suffering from severe seasickness. She tried three more times to enter Gaza, all unsuccessfully due to the blockade.

“The Gertrude Welch Award is the beginning of public recognition of people who make a difference,” said Barby Ulmer, a founder of the San José Peace and Justice Center, as she opened the award ceremony. She also recognized Darlene Wallach and Donna Wallach who remained in Gaza for 3-4 months accompanying Palestinian fishermen and farmers who were constantly being fired upon by the Israeli military.

The San José Peace and Justice Center established the Gertrude Welch Peace and Justice Award to honor individuals who have made significant contributions to social justice and peace locally and globally. The award is intended to draw attention to enduring efforts and struggles to bring about positive social, economic, and political change. It recognizes that social justice and peace are inextricably linked, and that peace is a natural outcome of freedom from injustice, inequality, and domination by one group or nation over another.

Milpitas Vice Mayor Pete McHugh presented Commendation plaques from the City of Milpitas to each of the three Gertrude Welch Peace and Justice Award recipients, saying, “It’s up to us to make a difference!”

On August 23, 2008 the siege of Gaza was broken by a group of human rights activists, aid workers and journalists. This group, known as the Free Gaza Movement, sailed 350 kilometers over choppy seas on two small fishing boats from Cyprus to Gaza. Upon arriving at the Port of Gaza they successfully broke the Israeli blockade of Gaza. They made the journey despite threats that the Israeli Navy would use force to stop them. They arrived in Gaza to the cheers of tens of thousands of Palestinians who came out to the beaches, piers, and boats to welcome them. Two small boats, 44 determined human rights workers, one simple message: “The world has not forgotten the people of this land. Today, we are all from Gaza!”

Since that August day in 2008 the international human rights community has continued to break the siege of Gaza by sea and by land. All of this has followed in the wake from the Free Gaza Movement’s initial boat trip.

The award honors citizen-activist Gertrude Welch (1919-2007) who marched with César Chávez in the 1960s, worked to end the Vietnam War in the 1970s, and sought to ban nuclear weapons in the 1980s. After joining a fact-finding delegation to Nicaragua in 1985, she worked to persuade local churches to create sanctuaries for Central American refugees. In 1992, as president of the Affordable Housing Network, she led a successful campaign to win $20 million from the city of San José for development of low-income housing.

Ms. Welch served many years on the Santa Clara County Human Relations Commission and as its chair. She worked tirelessly in 2001 to form the Network for a Hate Free Community. She and others were successful in getting the Board of Supervisors to pass resolutions against the Iraq sanctions and to support a moratorium on the death penalty. She worked to bring resolutions against the Patriot Act, to end the Iraq war, and to approve Palestinian Cultural Day. She was a founder of the Friday Peace Vigil in front of the Federal Building, which started shortly after the U.S. attack on Afghanistan in November 2001 and continues to this day.

The San José Peace Center was founded in 1957 by individuals profoundly concerned about peace and justice issues, especially the growth of nuclear arsenals and atmospheric nuclear testing. This was followed by activism against the Vietnam War, counter-recruitment, and helping other peace centers get started in Santa Cruz, Oakland, Modesto, San Mateo, and Hayward. Renamed in 2006 the San José Peace and Justice Center, it is among the oldest continuously-operating peace centers in the western United States.

After more than fifty-two years, the San José Peace and Justice Center, along with its affiliated community partner organizations, continues to educate and engage the South Bay community around critical issues of peace and justice, with a current focus on ending the wars in Iraq and Afghanistan, workers’ and immigrants’ rights, the right to health care, abolition of torture, and the elimination of racial profiling. 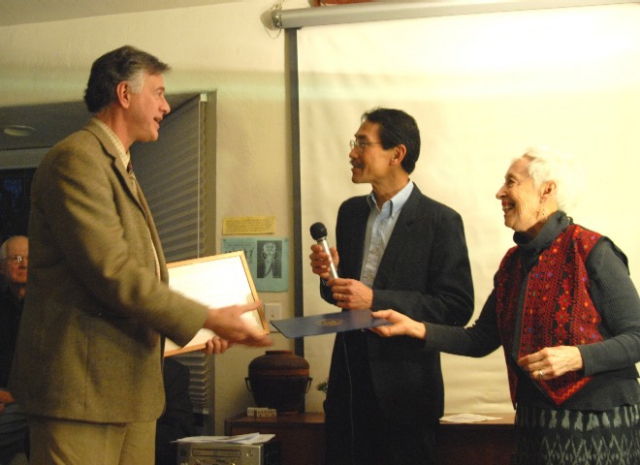 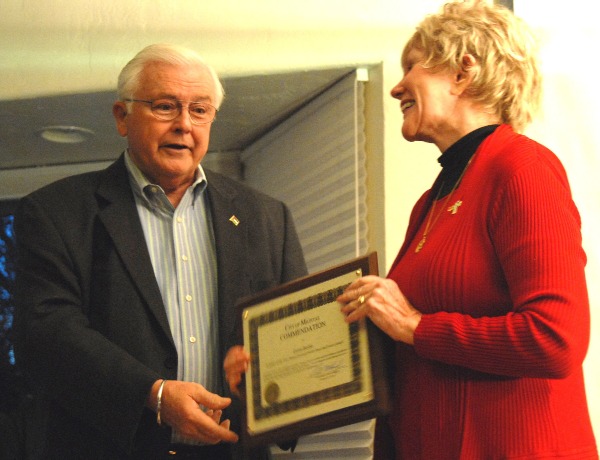 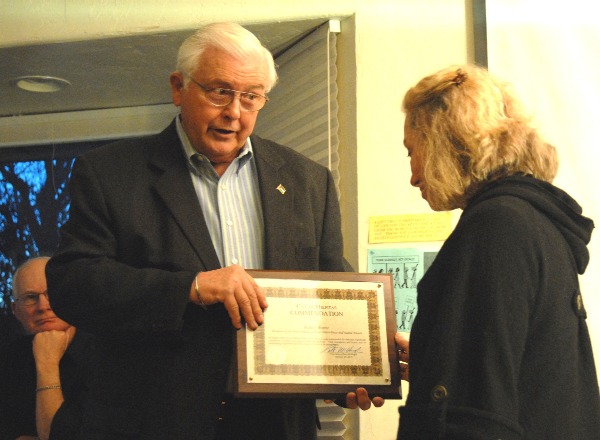 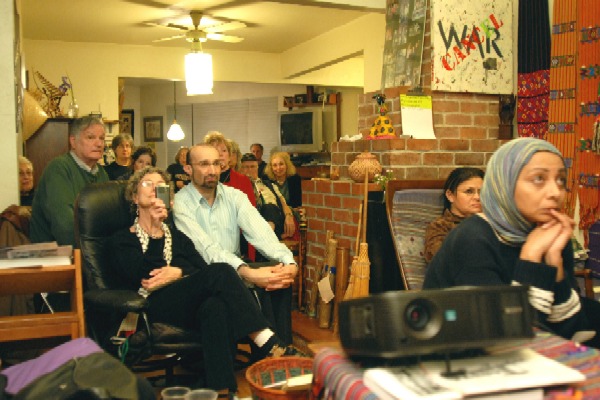 Audience listening to Paul Larudee speak about the Free Palestine Movement.
END_OF_DOCUMENT_TOKEN_TO_BE_REPLACED
Add Your Comments
Latest Comments
Listed below are the latest comments about this post.
These comments are submitted anonymously by website visitors.
TITLE
AUTHOR
DATE
Thanks Milpitas
Anne
Who knew Milpitas was so cool?
...
Support Independent Media
We are 100% volunteer and depend on your participation to sustain our efforts!