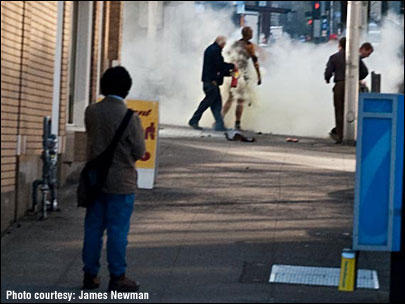 A man set himself on fire Wednesday outside Ungar Furs in Portland, Oregon. After dousing himself with gasoline, he attempted to enter the store, shouting “There are animals dying! Animals dying!” After police extinguished the flames, he was taken to Legacy Emanuel Hospital where he later died.

The man was identified as 26-year-old Daniel Shaull from Kansas. Among the local activists I have spoken to, none are familiar with Shaull by name, nor recognized him as being a part of the active, long-running campaign against Ungar Furs. Yet the location and witness reports strongly indicate this man sacrificed himself to bring attention to the horrific treatment of animals on fur farms.

A news report, which aired prior to Shaull being announced dead, can be viewed here.

Ungar Furs is a retail fur store in Portland which has been the target of a prolific campaign by local activists. Ungar became a target after frequent protests successfully closed another Portland fur store, Schumacher Furs. The owners of Schumacher Furs gave animal rights activists full credit for shutting them down in 2007.

Amidst a range of speculation, I think it is important to assume this is a genuine action by a person driven to make the ultimate sacrifice by the severity of animal suffering. When every legal channel to affect change is closed, people will increasingly be driven to actions which bring both attention to the plight of animals, and a disruptive effect to those who kill them.

Shaull is not the first to give his life in the U.S. animal liberation struggle. This is a time to remember William Rodgers, who took his life in an Arizona jail in 2005 while being held for numerous Animal Liberation Front actions. It is also a time to remember Alex Slack, who took his life while awaiting trial for the A.L.F. bombing of the Utah Fur Breeder’s Agricultural Cooperative in 1999.

If anyone knows Daniel Shaull, please contact Voice of the Voiceless, so that we can make the full story of this action known.

To those who claim the animal rights movement is “violent”, this action should be yet another reminder that every casualty to date has fallen on our side. Daniel Shaull is just the latest victim.

“If this is what the world has made of us, then let it live with the consequences”.

Contact: info@voiceofthevoiceless.org
For more information on this event, go to http://www.animalliberationpressoffice.org/news_articles.htm

www.animalliberationpressoffice.org
press@animalliberationpressoffice.org
§Searching for the Significance of a Life and a Death
by Cat via Portland IMC Friday Jan 29th, 2010 12:39 PM
Yesterday, a man set himself on fire outside Ungar Furs, and burned himself to death. We know his name now: According to the Alliance, it was Daniel Shaull. And we know that what he did appears to have been in solidarity with the animals who continue to die horrible deaths, day after day after day, to keep Nicholas Ungar in business. We know that, even as he was on fire and undoubtedly in terrible pain, he mustered great strength and tried to go inside the fur store to spread the flames to the coats and garments and blood-stained profits of the last fur store in Portland.

I would like to know more.
Indeed, it was strange to find out he was someone most of us did not know. Those of us who were not there yesterday, who scrambled to find out who it was, we each had a fear in the pit of the stomach, each of us sure we would know him, each of us having someone or other in mind that it might be. I know I did. When I finally heard his name, a small sense of relief washed over me, because it was a name I did not know. But someone knew him. And he deserves his story. If you knew Daniel Shaull, please post your stories of his life here.

If you did not know him but you just want to offer your critique of self immolation as a tactic, please just keep your useless judgments to yourself. This is the morning after, the place where all the bone-pickers will come in and make dismissive claims about this man and his last act of sacrifice. You know what I'm saying. "This is going too far," "he was just crazy," "he was a terrorist," "this tactic is too extremist," and perhaps the most unforgivable of all, "this will make us all look bad."

I'm not ready to dismiss the significance of this man's last act so easily.

Every year, more than 50 million animals - many of them dogs and cats - die for the fur industry. They die needless, painful, and suffering deaths so that people like Nicholas Ungar can make a lot of money, and so that vain, selfish, irredeemably thoughtless people can wear those animals' skins. Fifty MILLION beings, every single year, killed in horrific and unceasingly bizarre ways. For nothing. Absolutely nothing. Some of them are picked up by their hind legs and pounded against the cement until they die. Some have metal bars shoved into their mouths, and electrodes pressed against their anus, and are electrocuted. Some are gassed. Some are trapped in the wild, and spend days on end struggling to free themselves. Terrified, dehydrated, hungry, cold, and mutilated, they wait for the trapper to come. I have personally witnessed a fur trapper approaching a frightened little bobcat like this, right here in the woods of Cascadia, and then unceremoniously beating her over the head, repeatedly, with a baseball bat. CRACK. CRACK. CRACK. CRACK. CRACK. Until she finally died.

Sometimes, these animals are beaten unconscious, and they awaken while they are being skinned alive. This is not just some far off, urban legend thing. This is something real and immediate and horrible. I have seen this happen, and watched as the trapper just laughed and taunted the half-skinned, dying animal. Her last screams jeered at, the violation of her being complete. Her bloody little body went into a pile of bloody little bodies just like hers. Her skin was sold in someone's garage, on the first leg of the journey to Ungar or Schumachers, or Nordstroms.

This is what Nicholas Ungar sells.

Unimaginable suffering, for nothing. A lot of people just don't care. A lot of people think wearing fur is acceptable, and that making a living off this kind of unending suffering is tolerable. It's the people who care that are labeled "terrorist." The killers are just "businessmen." Some people actually defend the practice, many more just don't care enough to do anything about it. Still others like to get all philosophical and "tolerant" and pretend to be above it all. (I have seen a lot of that here on this site in recent days. These are the people who also defend slaughter houses, and lab experiments. Cold, academic justifications for horrific acts of violence. Disembodied philosophizing and dismissive tomes meant to put those who actually give a damn "in their places." Here, for example: http://portland.indymedia.org/en/2010/01/396920.shtml, and here: http://portland.indymedia.org/en/2010/01/396920.shtml, and here: link to portland.indymedia.org.)

Is it really all that hard to understand, that someone could find that they just can't take it any more? They just can't stand by and do nothing, even when there is nothing left to do? Is it really so difficult to comprehend that this man could be so profoundly moved by such an unimaginable injustice, that he would be willing to actually sacrifice his own life in a last desperate act?

Not to me. I get it. I can understand that frustration and pain and desperation. I have felt it myself, and I think that any one of us who was born with the ability to empathize with non-human animals in this cold-hearted world has felt it too. We might not be lighting ourselves on fire, but deep down inside, I think we understand Daniel Shaull's desperation and despair. Even if we did not know him, we know what it feels like to bear witness, day after day, to the intentionally inflicted pain and suffering of others, and to feel so mutely powerless to make it stop. We watch in horror as a never ending stream of animal victims is poured into the maw of human hatred and indifference. We cannot understand how humans can be so needlessly, thoughtlessly, cruel. And we cannot understand why their eyes cannot be opened to the pain and suffering they are causing. Sometimes, even our "friends" turn out to be the kind of people who either cause this suffering, or try to excuse it. God, it gets so frustrating after awhile... and it never ends.

If you care about animals in this human world, it's easy to feel like you are alone in a sea of inexplicable hatred. It isn't even just the people wielding the metal pipes in the slaughter houses, or the electrodes on the fur farms. It's not just the people with the guns and the deer heads tied to the front of their "rigs." It's not just the people shoving load after load after load of cats and dogs into gas chambers, or the people gouging baby mice out of their mothers' bellies in laboratories. It's not just the assholes offering "chicken chokin" classes, or the old men making money selling furs. It's also all the mind-numbingly cold people who build word monuments to themselves over it - defending it and justifying it and dismissing it. It's the overwhelming awareness of all the suffering in the world, and the strange ostracism of anyone who can see it, who tries to point it out.

This can be a cold, hard world for people of compassion for the animals. Even radicals often just don't get it.

It may actually turn out that Daniel Shaull suffered from mental illness. But in this world, I sometimes think mental illness and desperate acts might be the only sane response.
http://portland.indymedia.org/en/2010/01/3...
Add Your Comments
LATEST COMMENTS ABOUT THIS ARTICLE
Listed below are the latest comments about this post.
These comments are submitted anonymously by website visitors.