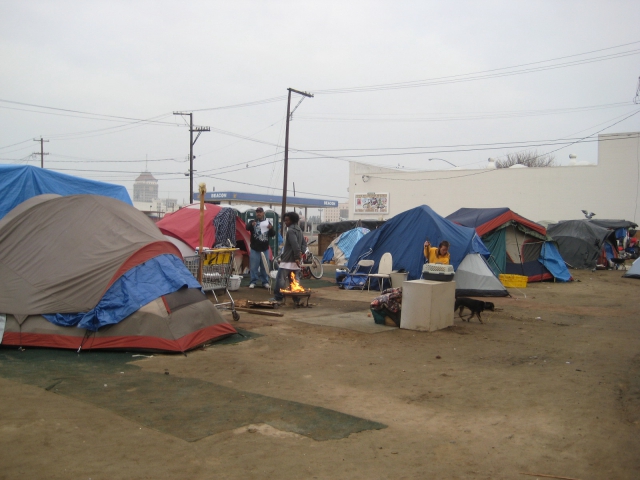 original image (1600x1200)
Thursday, January 28th, 2010 marked a dark day of particular significance in the struggle for human rights in Fresno California. After a series of attempts to remove homeless residents from a barren lot at the corner of Ventura and F St. in downtown Fresno, officials from the City of Fresno faced bold opposition from committed residents when a cleanup was ordered under penal code violations and questionably obtained complaints of trespass. Administration officials resorted to tactics including bribery (offering housing vouchers and promises of temporary housing to people otherwise faced with arrest or vagrancy) and outright deception in order to facilitate the removal and to circumvent the planned civil disobedience of affected citizens and in response to their failed, abandoned attempt at seeking a Temporary Restraining Order in the Fresno County courtroom of Judge Adolfo Corona the previous day. Not overly famous for respecting the constitutinal requirements of due process, the City of Fresno may now soon be better known for their backdoor violations of verbal agreements entered into with people in desperate straits.

The morning after the City of Fresno dismissed its own request for a TRO, the now displaced residents stood their ground, braced for arrest. City officials, including Police Chief Dyer, who appeared to be negotiating for the city left the scene for a period of time to meet and discuss their options. Upon return they requested the residents do two things, relocate their tents off the sidewalk areas and move inward on the lot 37 feet to clear a particular parcel. At that point it appeared they would be permitted to stay in the more restricted zone, but by the afternoon, reports were printed in the Fresno Bee that all had vacated voluntarily, many relocating to an area at Mono and G St.

Among the many facets left uncovered by Bee reporters were the current conditions at the F St encampment. After previous complaints were raised by the City as they prepared to enforce health code violations by removing residents and their belongings several weeks ago, private parties stepped in to provide portable toilets and trash containers. The very suggestion made by Judge Corona towards the City attorneys in the first hearing, whereupon the City of Fresno filed for a TRO to continue the process they had initially intended to perform on December 16, 2009. Because the ownership of this property was in question, and because legal representation made it clear to the city that they stood on shaky ground, the initial cleanup was postponed. What the Bee and presumably other media might accidentally overlook is how conditions transformed in the campsite once toilets and trash containers were provided. The residents successfully removed thousands of pounds of waste, and the grounds were nearly immaculate when the City moved in again.

Other aspects falling through the media's cracks in their coverage are the questionable ownership claims the City justified their actions upon. While they seemingly knew the identity of one owner of a parcel, they instead focused their more public claims on tenuous ones, involving the two out of town surviving heirs of a small parcel split six ways. Both under threat of the expense of a city initiated fence and cleanup, which the City claimed would be borne by property owners.
http://www.fresnobee.com/local/story/1772308.html?storylink=mirelated
As complicated as that is, the more interesting facts lie in the identity of the predominantly undisclosed owner of another parcel, Tom Richards, who is said to be both a developer and chairperson of the Committee to end Homelessness. The sticky facts of this may elude the keen eye of the Fresno Bee, but certainly not those of more interested parties.

Further developments throughout the day reportedly involved a series of evictions as the City pursued the displaced residents from location to location, informing them of complaints and insisting they move again and again. As the rights of homeless citizens of Fresno usually are considerably less than those of other citizens as measured in City of Fresno concern for their safety and well being, the questions arise,
would homed citizens of Fresno express the same disregard and disdain if these were Haitian refugees?
Would the response of the City of Fresno be the same if these were Armenians fleeing Turkish genocide?
Will the numerous wealthy churches such as The People's Church and Northwest Church continue their silence and remain uninvolved as they pass their collection plates around every service, depositing the coins, paper money and tithings into their vaults for holier causes than the service of the poorest of those among us?
Will the Fresno Bee continue to provide lip service for the City of Fresno without a stitch of question? The answers to these questions are uncertain, but based on recent history, no positive developments are likely in store on these fronts, for the homeless and concerned citizens of Fresno. 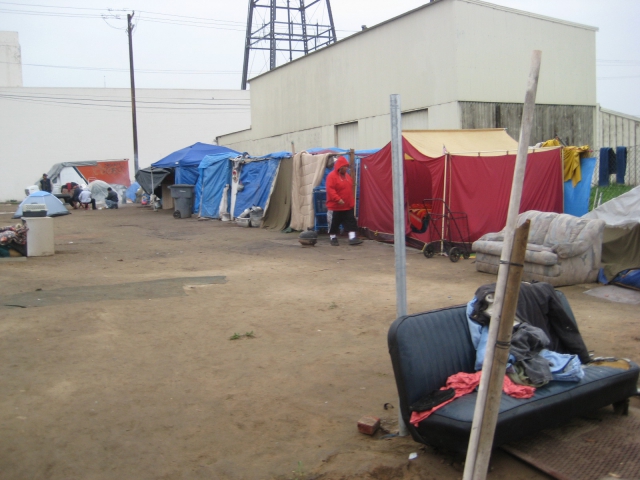 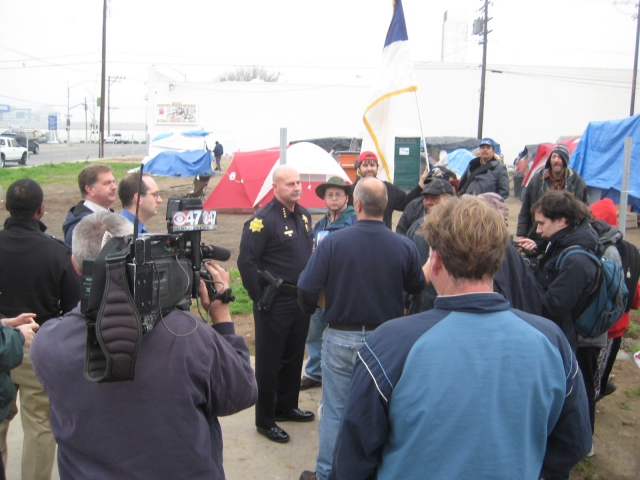 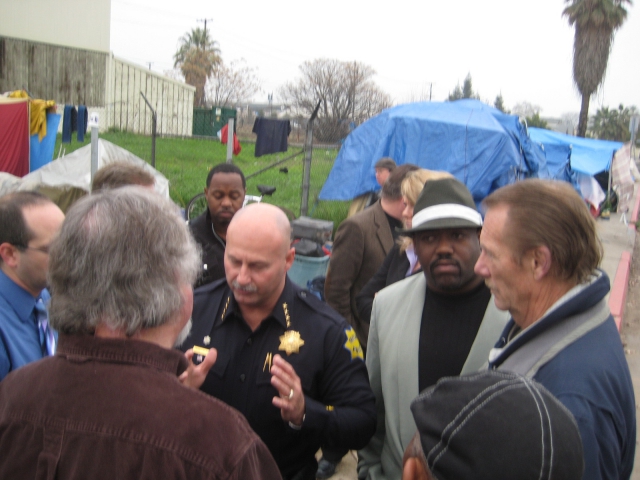 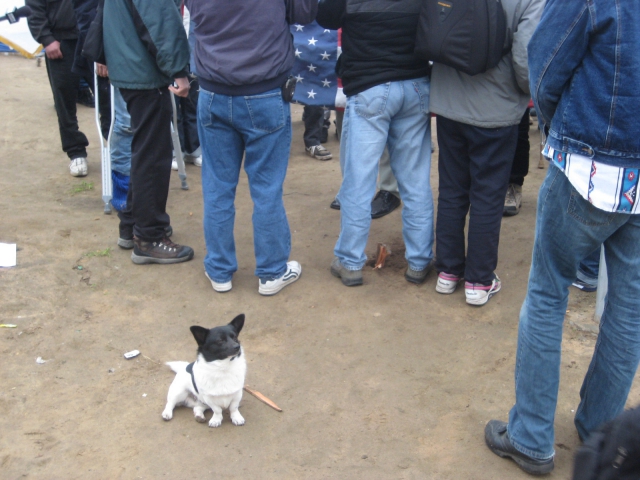 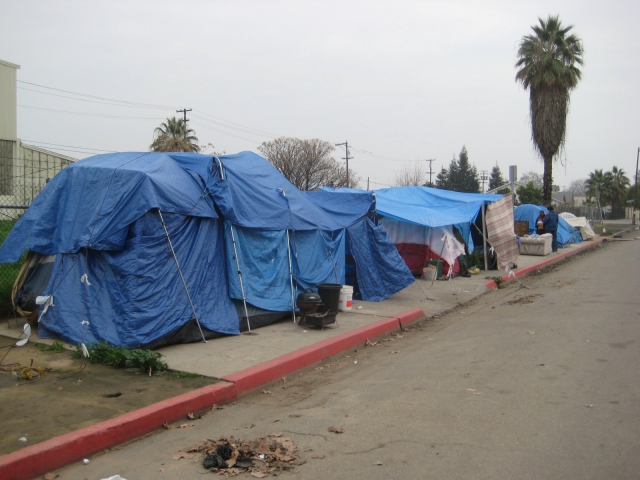 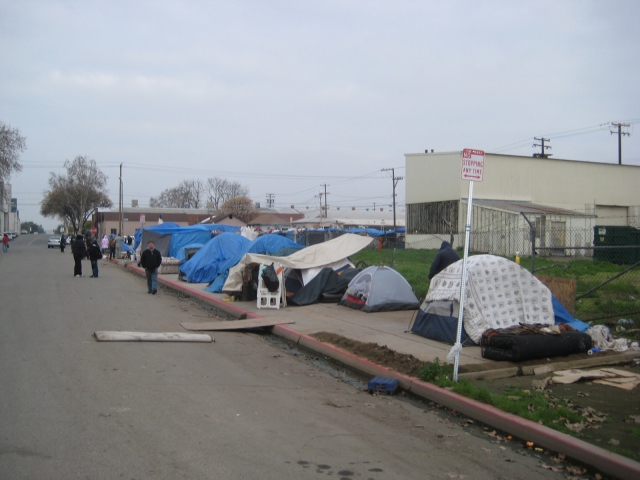 original image (1600x1200)
Add Your Comments
Comments (Hide Comments)
§But wait, there is more to the story
by Mike Rhodes (editor [at] fresnoalliance.com)
I was downtown today and saw that the City of Fresno has constructed at least 3 fences around vacant lots in the G and Mono area today, plus the one on Ventura and F street yesterday. I can confirm that many of the homeless have been forced to move to The Hill, which has been re-named Crack Hill, because of all of the drug use going on there. The change at The Hill has been taking place over the last couple of months. This is the land that Greg Barfield (Fresno’s Homeless Czar) was telling the homeless to go to when he was trying to remove them from Ventura and F street. The city cut the water to Crack Hill about a week ago, according to Brandon Morse, who I ran into out there. Brandon and his dad, Rick, have been providing the homeless with portable toilets and trash bins. Brandon also said that a list of about 25 homeless people from Ventura and F have been taken off the priority housing list. He said this happened because their names were posted at the Poverello House Thursday night, telling them they had a meeting with Housing Authority staff at 8 a.m. this morning (Friday), and that because they missed the meeting, they are off the priority list. These are the same homeless people that could not have been at the Poverello House because they were being chased from one vacant lot to another yesterday.

One person close to the scene of the 3rd eviction that took place on Thursday told me that he had been told that the City of Fresno did NOT own the lot southeast of California and G street where the city chased the homeless out of yesterday. At the forum last night I asked Greg Barfield about it. He said he thought the city owned it. Brandon Morse said that the police told him last night that the city owns the land. He said the police told him that the city owns that lot and the owner of the property does NOT want the homeless on it. Brandon also said that City staff was threatening the business that he and his dad got the portable toilets and trash bins from.

In a new development we just found out about today, the City Council will be considering a new ordinance that will set up a system to control the use of medians. What they want to do is establish a permit system so all of the Fat Cats favorite charities can use the median islands but the homeless will be arrested if they ask for help.
Add a Comment
Support Independent Media
We are 100% volunteer and depend on your participation to sustain our efforts!