by Mike Rhodes (editor [at] fresnoalliance.com)
The City of Fresno is on the attack again. They are willing to spend endless amounts of money to chase the homeless from one vacant lot to another. Why won’t they use some of their resources to provide a safe and legal campground where the homeless can live? 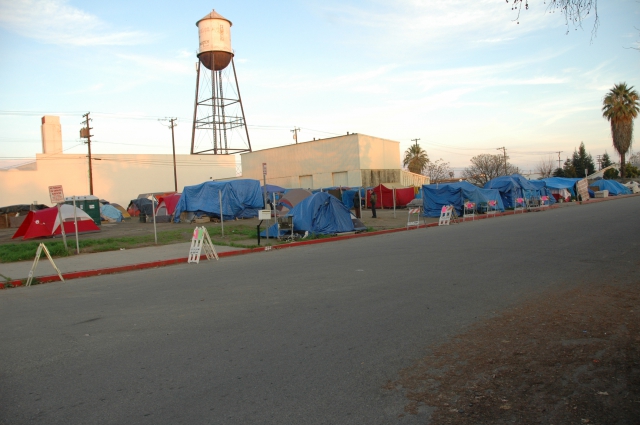 original image (3008x2000)
The City of Fresno tried a new approach in court today in their ongoing attempt to evict the homeless in an encampment at Ventura and F street in downtown Fresno. They dropped their effort to get a Temporary Restraining Order (TRO) and convinced the judge to dismiss a case they had brought before the court.

With the court hearings over, the city now plans to move forward with the evictions, claiming the “owner” of the property has asked them to clear the homeless people off the land. The city is expected to say the homeless are trespassing and subject to arrest if they do not leave.

Bruce Rudd, Assistant City Manager, is telling the press tonight that they will try and force the homeless off the property tomorrow, starting at 8 a.m., without arresting anyone. Alan Simon, one of the homeless living on the vacant lot, told me that he can’t move. Simon has a cast on his leg and says he is not capable of packing up his tent and moving it. He says that he will stay and see what happens.

The mood in the camp this evening was defiant, with most of the people I talked to saying they would not move. People said there was no place else to go. The City of Fresno has no campgrounds or other facilities where people can go. Rudd claims that The Rescue Mission has bed space available and that the homeless at F and Ventura should go there. Rudd did not tell the media that The Rescue Mission is for men only, that you have to sit through a Christian religious service before you get a bed, or that many homeless people will not go to the Mission because of the way they treat the homeless. Larry Arce, the Rescue Mission director, has sent his “disciples” into the homeless encampments to destroy their tents and other property.

Rudd is also telling the media that the homeless should avail themselves to the other services available, so they can get off the streets. Other city officials attempt to take the moral high ground by saying they are trying to put an end to the terrible conditions at the Ventura and F street encampment. They do not, however, explain why the city has seemingly endless amounts of money to attack the homeless in court and chase them from one vacant lot to another, but no money to establish a safe and legal campground where the homeless can live. 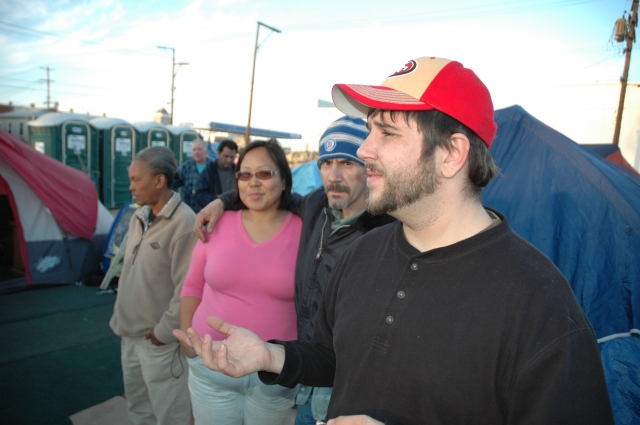 original image (3008x2000)
Brandon Morse (far right) speaking this evening to the homeless at the F and Ventura encampment. Brandon and his father, Rick, have installed portable toilets and provided trash pick up for the homeless.

END_OF_DOCUMENT_TOKEN_TO_BE_REPLACED
§Love Letters From the City
by Mike Rhodes 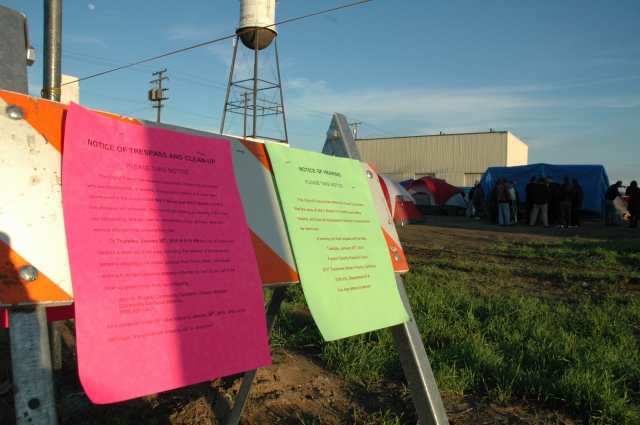 original image (3008x2000)
These are the notices posted by the city to intimidate the homeless into leaving the Ventura and F street encampment.
END_OF_DOCUMENT_TOKEN_TO_BE_REPLACED
Add Your Comments
Comments (Hide Comments)
§Homelessness in Fresno
by Event
Thursday, January 28
6:30 - 8:45 p.m.
Homelessness in Fresno: The art, the experience, the solution. This event will be held at the St Paul Newman Center, 1572 E Barstow Ave. The schedule:

6:30 "Hotel Fresno" and "Homeless Dog", films by Teresa Flores and Dixie Salazar
6:45 Discussion about the causes and the experience of homelessness with three members of
Fresno's Homeless Community
7:10 The Kincaid Center: Mike Rhodes
7:25 The City's Program for the Homeless: Greg Barfield
7:40 Intermission
7:50-8:45 Written questions

Add a Comment
§Homelessness in Fresno
by Robert Blind Bear
They are really butchering their heads.
END_OF_DOCUMENT_TOKEN_TO_BE_REPLACED
Add a Comment
Support Independent Media
We are 100% volunteer and depend on your participation to sustain our efforts!