Add an Event
Newswire
Calendar
Features
Home
Donate
From the Open-Publishing Calendar
From the Open-Publishing Newswire
Indybay Feature
Publish to Newswire
Add an Event
Related Categories: California | East Bay | Police State & Prisons | Racial Justice
LA Coalition for Justice for Oscar Grant Press Conference, 1/8/10: photos and full audio
by dave id
Monday Jan 11th, 2010 12:10 AM
The newly formed Los Angeles Coalition for Justice for Oscar Grant held a press conference in front of the LA court house just before the first Southern California hearing in the murder trial of Johannes Mehserle was set to begin. The LA Coalition, along with several Oakland community activists who traveled south for the hearing, spoke about their determination to end the wanton killing and abuse of people of color by police. Full audio of the press conference is below. 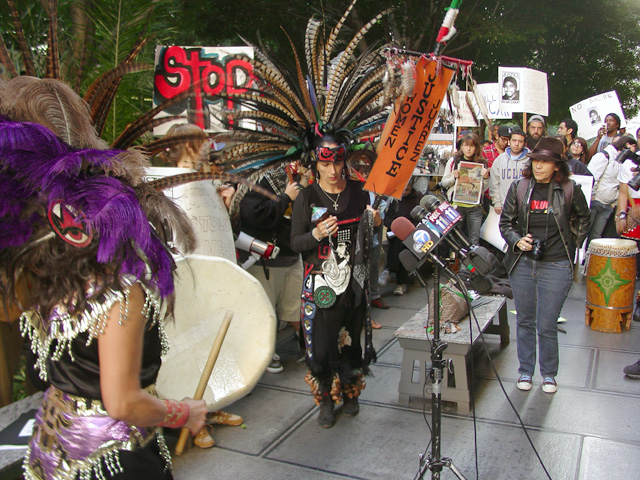 Pictured above are the indigenous Danza Mexica Cuauhtemoc who blessed the press conference space with the blowing of a conch shell, singing, dancing, drumming, and the burning of sage.

The scene inside and outside of the court room revealed just how disingenuous was the change of venue order by Alameda County Superior Court Judge Jacobson. Amongst the reasons offered for venue change by Mehserle's defense team and cited by the judge in his order -- besides a non-scientific and racist argument that African Americans in Alameda County could not be impartial jurors, based on a poll that included less than twenty African Americans -- was that media coverage and social justice activism in the Bay Area would interfere with a fair trail for Mehserle. Any reasonable person could have easily concluded that both would be present in any county the trial was moved to when the case represents the first time ever a police officer has been charged with murder for an on-duty shooting in the state of California. The rarity and magnitude of this trial is made all the more clear by the reported 1,000 people killed by police in California over the last ten years, 310 of whom died in Los Angeles alone -- every single one of which was determined to be justified by various police departments, district attorneys, and other authorities. A change of venue cannot hide this simple fact.

A report from inside the court room by community media activists will be forthcoming. The trial is currently set to begin in mid-May, with another hearing on February 19th.


January 17th: The next public meeting of the Los Angeles Coalition for Justice for Oscar Grant will be held at 5pm on Sunday.


Jan 21st: The next meeting of the Oakland Assembly for Justice will be at 7pm in West Oakland.


February 19th: At the next LA hearing, Mehserle's defense attorney Michael Rains will argue to have Alameda DA's office removed from case and for a reduction in Mehserle's bail even though Mehserle made bail within weeks of being arrested for the murder of Oscar Grant.

http://indybay.org/oscargrant
§Mehserle and his defense team can run but they can't hide from social justice activists and the media
by dave id Monday Jan 11th, 2010 12:10 AM 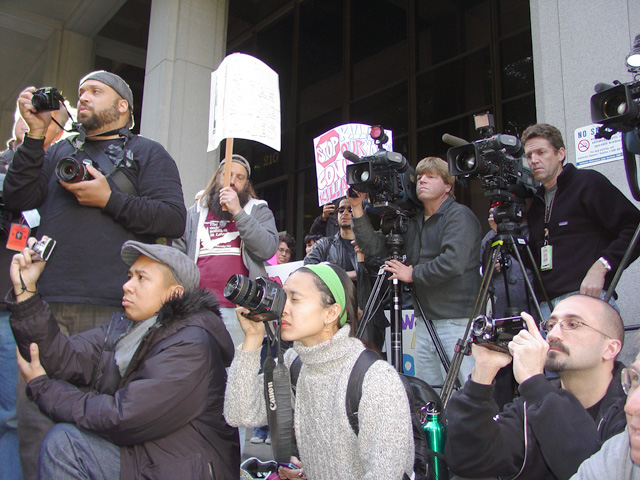 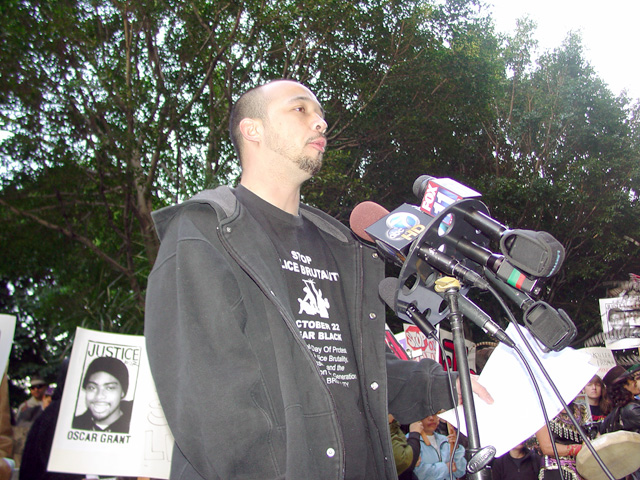 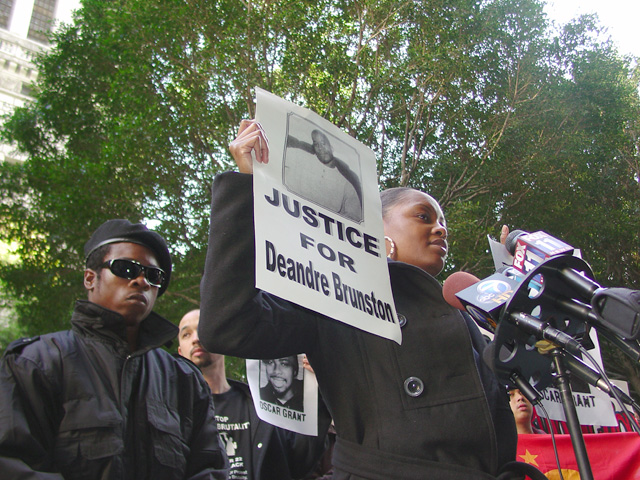 From the LA Watts Times:

The 38-year-old Compton resident said she came to the [LA Coalition] meeting, “because it’s for Oscar Grant and his family … we’re all Oscar Grant, Deandre Brunston, same thing. Everybody knows the situation with my nephew Deandre … And it’s just been happening ever since, back-to-back. So, I’m here to support all the families and Oscar Grant’s family when they come to L.A.”

Deandre Brunston was a 24-year-old male whose shooting by Los Angeles County Sheriff’s deputies on Aug. 24, 2003, was caught on video and also widely distributed.

Brunston, who had been sought for questioning in a domestic dispute, was cornered in a doorway by deputies and repeatedly stated he had a gun, which turned out to be false. He said he would fire on deputies if they released a police canine on him.

Deputies released the canine, and when Brunston made a sudden move, fired more than 80 shots at him and shot the dog in the process. The canine was then airlifted to a hospital while Brunston was allowed to bleed to death. 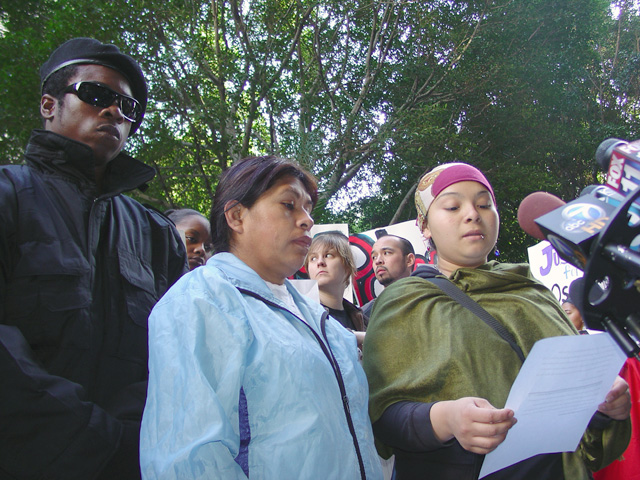 Statement by Margarita Rivera, sister of Carlos Rivera, read in English and en Español. Porfiria Rivera speaks about the trauma since she lost her son, another assassination by police of an innocent man.


List of 27 People Murdered in 2008 by Law Enforcement in Los Angeles
http://www.assatashakur.org/forum/contested-zone/33684-people-murdered-2008-law-enforcement-los-angeles.html

http://indybay.org/oscargrant
§Jubilee Shine of the Coalition for Community Control Over the Police
by dave id Monday Jan 11th, 2010 12:10 AM 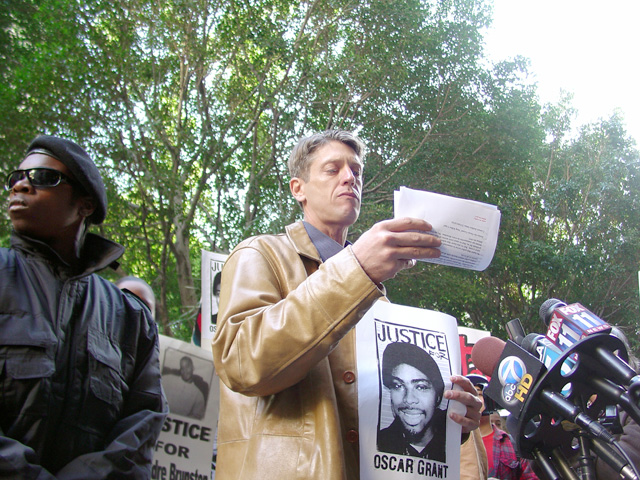 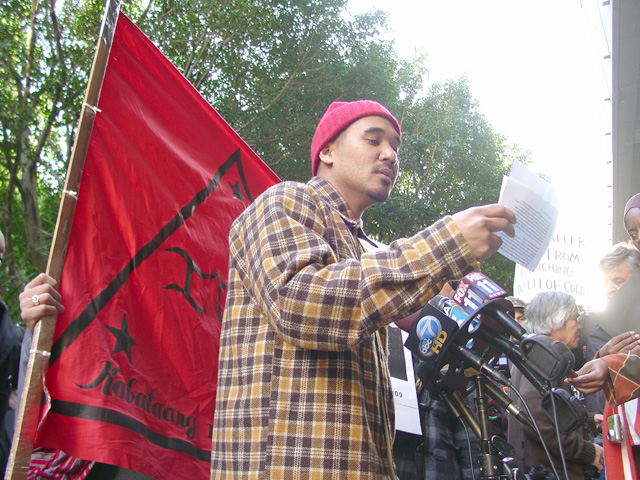 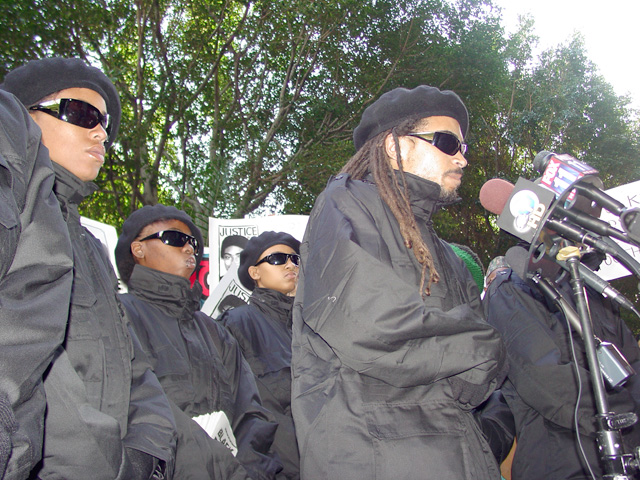 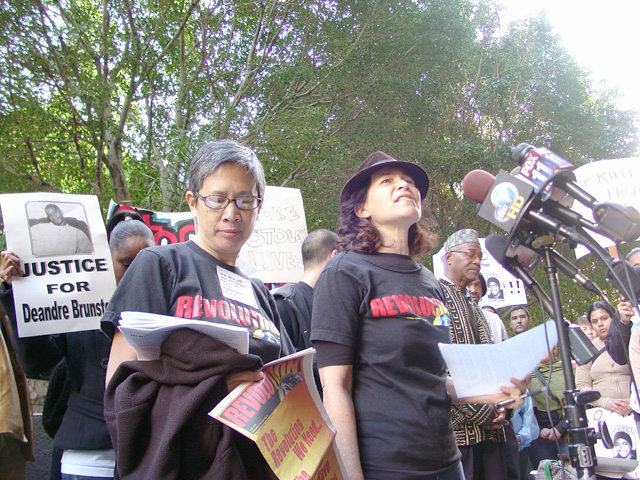 [Apologies for first twenty seconds of audio here missing due to needed battery change for recorder, as indicated by tone in audio above.]
http://indybay.org/oscargrant
§Kayla De Los Reyes of AnakBayan Los Angeles
by dave id Monday Jan 11th, 2010 12:10 AM 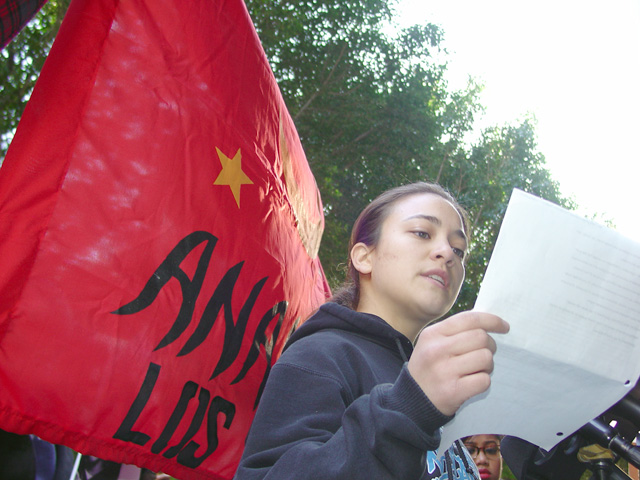 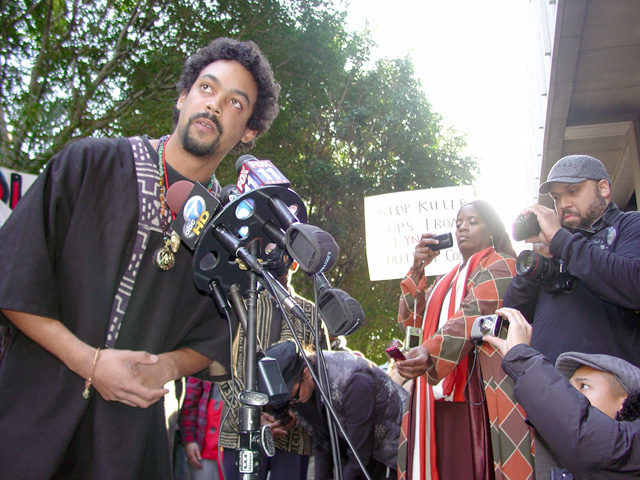 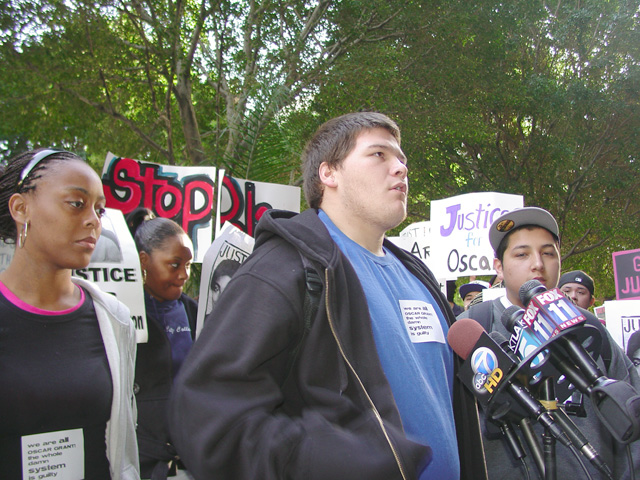 http://indybay.org/oscargrant
§Shango Abiola of Oakland and Commemoration Committee for the Black Panther Party
by dave id Monday Jan 11th, 2010 12:10 AM 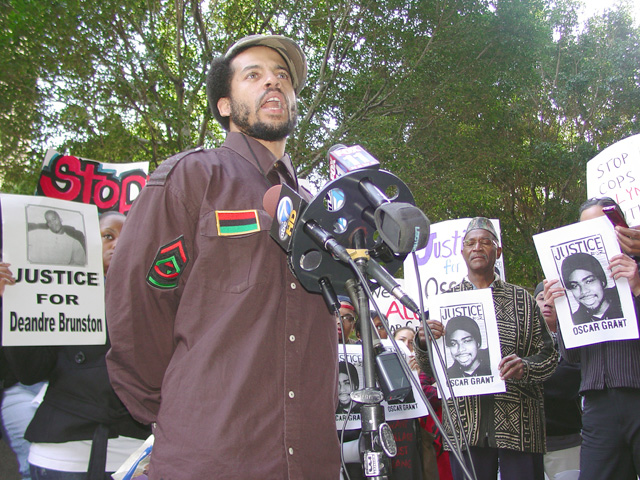 http://indybay.org/oscargrant
§Rachel Jackson of the Oakland Assembly for Justice for Oscar Grant
by dave id Monday Jan 11th, 2010 12:10 AM 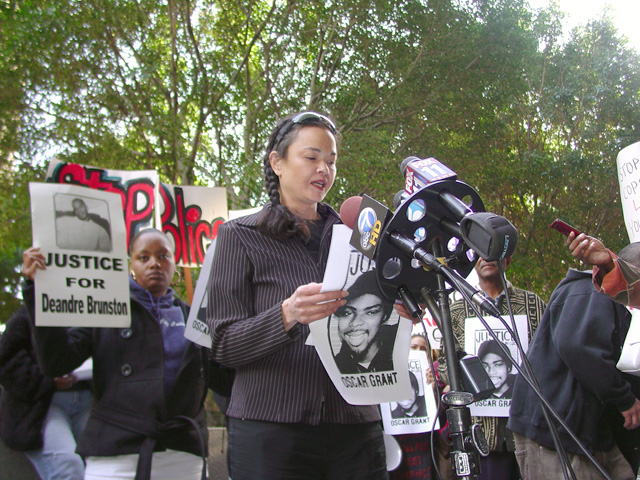 Jan 21st: The next meeting of the Oakland Assembly for Justice will be at 7pm at the Continental Club, 1658 12th Street in West Oakland. 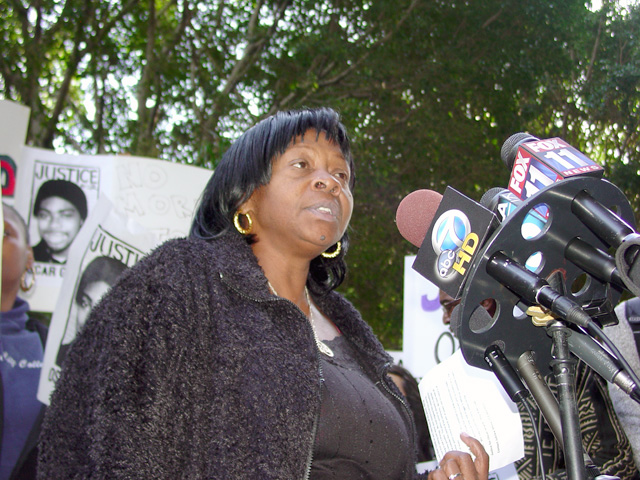 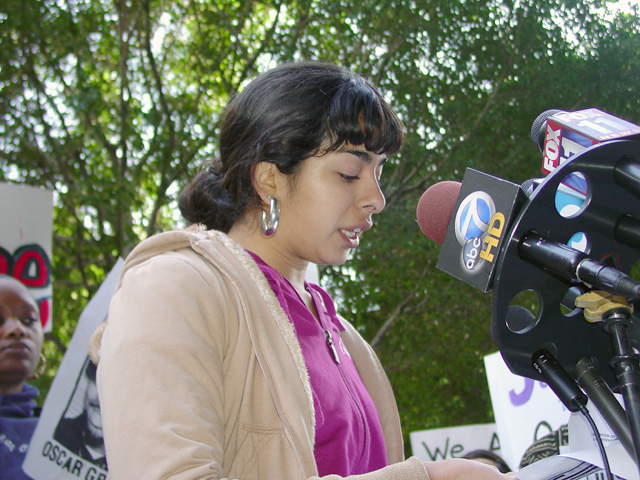 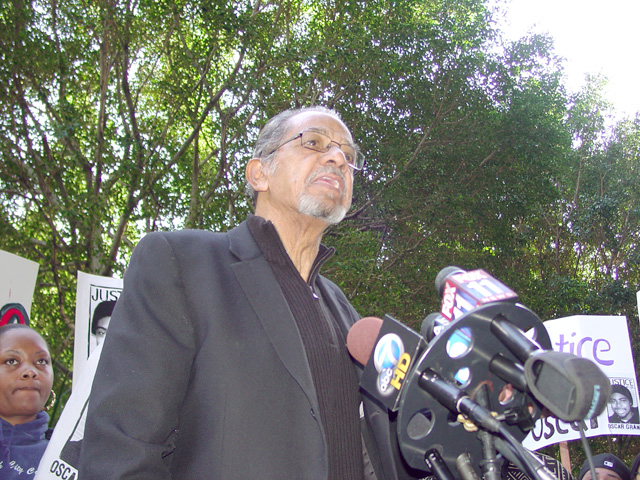 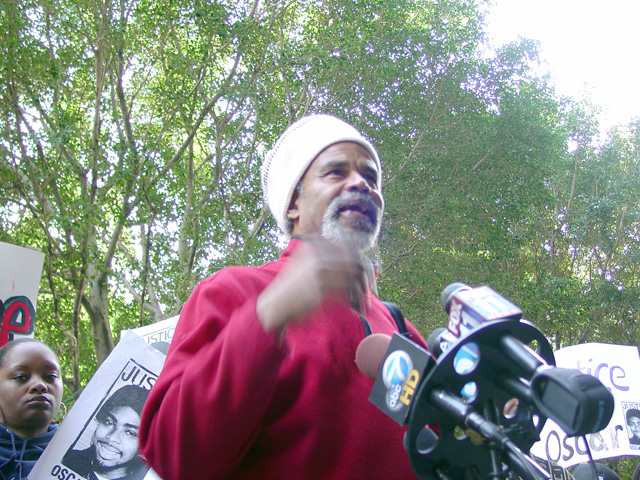 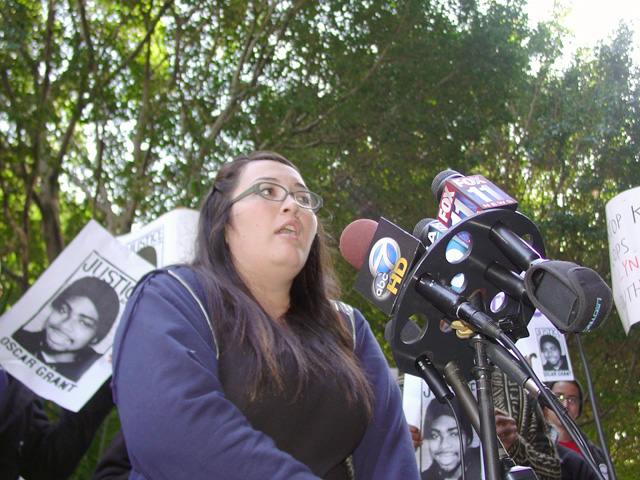 http://indybay.org/oscargrant
§Aidge leads the crowd in a chant to conclude the press conference
by dave id Monday Jan 11th, 2010 12:14 AM 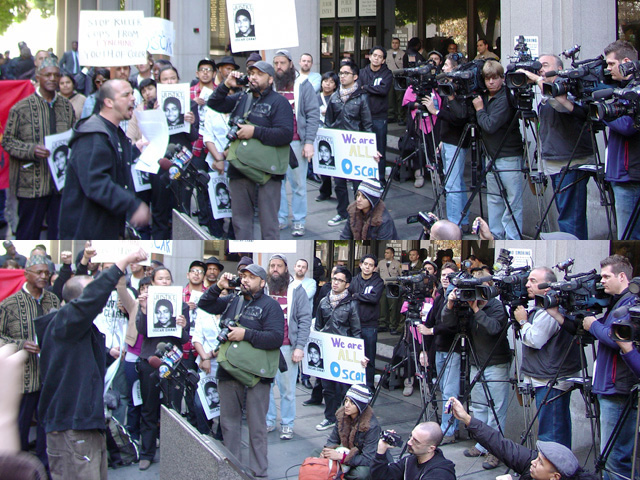 After the hearing concluded, Oscar Grant's family and private attorney John Burris gathered in front of the cameras and microphones for a debriefing on the first hearing in Los Angeles.

§Who does Mehserle want to Prosecute him?
by deanosor
(deanosor [at] mailup.net) Monday Jan 11th, 2010 3:29 AM
the police "union"? the people on cop shows (this is LA)?
Add a Comment
§thanks for the great photos!
by reality check
Tuesday Jan 12th, 2010 8:15 PM
thanks for posting the great photos really highlighting the diversity of the coalition!
Add a Comment
Support Independent Media
We are 100% volunteer and depend on your participation to sustain our efforts!