Add an Event
Newswire
Calendar
Features
Home
Donate
From the Open-Publishing Calendar
From the Open-Publishing Newswire
Indybay Feature
Publish to Newswire
Add an Event
Related Categories: Peninsula | Environment & Forest Defense | Labor & Workers
Raging Grannies at Demo in front of Tesla's Tony Showroom
by Greer Braun
Saturday Jan 9th, 2010 10:36 PM
Today activist group the Raging Grannies sang three songs they wrote that question Tesla's profit motive at the expense of workers. They were filmed at a demonstration in front of Tesla's Menlo Park showroom for KPIX-TV and seen at 6pm and again at 11pm on local news. "Why would Tesla build GREEN cars on *brownfield* property in Downey?" the Grannies asked. They pointed out that UAW workers will be out of jobs on April 1 when the Nummi auto site in Fremont will close; could it be Tesla does not want to employ union labor? 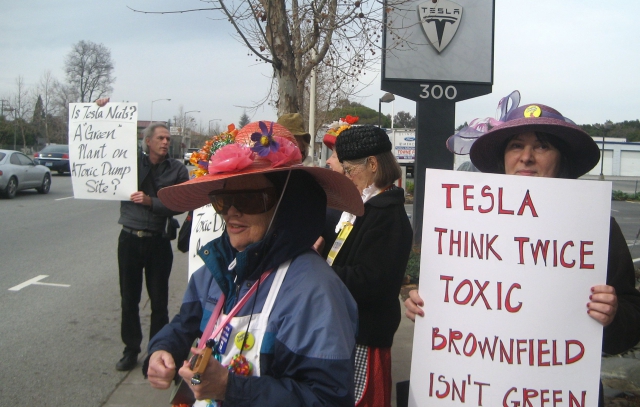 original image (2490x1584)
Brownfields are abandoned industrial facilities made available for re-use. Redevelopment of brownfields is of concern due to environmental contamination, especially for people who work there day in and day out. Tesla may be moving their new factory to just such a location, formerly a site of NASA research and heavy metal aircraft construction, in the town of Downey in southern California.

Today the Raging Grannies issued this statement: "We believe in employer accountability. Workers should not be worked to death simply because employers are able to shirk their responsibilities. We aren't doctors and we don't know what is making these people sick in Downey, but we urge Tesla to value the health of their employees enough to ask important questions. Someone needs to!"

The Raging Grannies gathered with other labor activists to lead a demonstration in front of Tesla's super showroom of $100,000 plus electric cars. The Grannies sang three songs they wrote that question Tesla's profit motive at the expense of workers. They were filmed for corporate media KPIX-TV and seen at 6pm on local news.

Steve Zeltzer addressed Tesla's failure to meet with workers in the film propmaking industry injured due to contamination at the Downey site. On December 9, 2009 Tesla Vice President for Communications Ricardo Reyes told a group of activists that Tesla was concerned about worker safety and would make arrangements to meet with parties injured at the Downey site and their supporters. Instead Reyes and Tesla have refused to return email and calls.
http://www.RagingGrannies.com
§Grannies join labor activists gathering in front of Tesla
by Greer Braun Saturday Jan 9th, 2010 10:36 PM 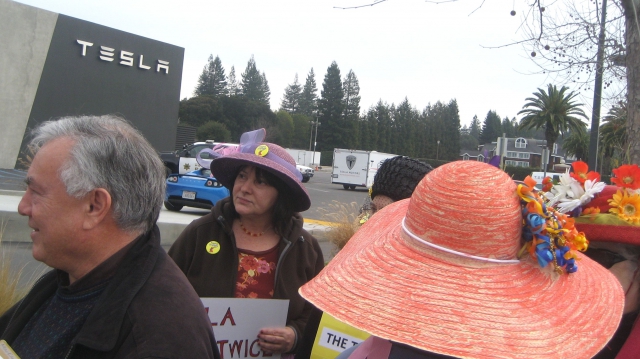 original image (2675x1504)
http://www.RagingGrannies.com
Add Your Comments
Support Independent Media
We are 100% volunteer and depend on your participation to sustain our efforts!