Add an Event
Newswire
Calendar
Features
Home
Donate
From the Open-Publishing Calendar
From the Open-Publishing Newswire
Indybay Feature
Publish to Newswire
Add an Event
Related Categories: East Bay | Police State & Prisons
BPD Officer Melissa Kelly Abuses 5150 protocol.
by WhoWatchesTheWatchmen
Saturday Jan 9th, 2010 8:36 AM
This is a portion of a medical record from Alta Bates Hospital in Berkeley. This is medical documentation generated due to a fake 5150 called in by Berkeley Police Officer Melissa Kelly back on December 3rd. The medical report clearly notes that there was no medical situation. No unusual behaviours or symptoms. The patient is in normal health. Officer Kelly set in motion a fake 5150 call out of anger, out of spite. The Officer is in clear abuse of police powers, in particular the 5150 protocol which is a medical protocol designed to help people who actually need psychiatric help. Officer Melissa Kelly manipulated pseudo-psychiatry; she used a medical protocol as a weapon. 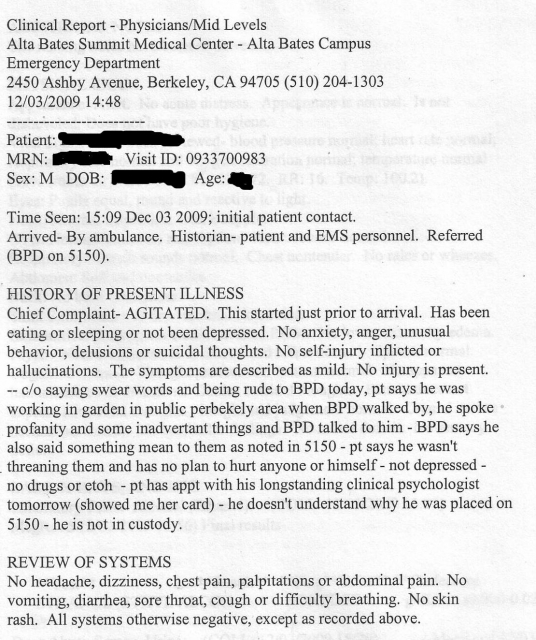 original image (1110x1324)
Both the Berkeley Police (headed by Michael Meehan) and Berkeley Mental Health have been stonewalling an investigation into the broad misuse of the 5150 protocol. There has been a sharp increase in the use of the 5150 protocol. Officers have been reporting fake 5150s just to get rid of people they have personal grudges with. Out of their own whims, Berkeley police officers have been creating their own pseudo-psychology in attempts to mark people as mentally unstable and a danger to the community. Aside from the harassment related to being abducted by police and EMTs, these fake 5150s generate medical bills for individuals that on average total over $1,500.

The EMTs did not comply with police orders noting that nothing seemed to be wrong. Instead the individual was sent to receive a quick check-up at Alta Bates (the hospital is near People's Park). The stay at Alta Bates lasted less than two hours, hardly the over 72 hours the officer adamantly requested.

The medical report from Alta Bates notes that "all symptoms are... negative." The report notes "no anxiety, anger, unusual behaviour or suicidal thoughts". The report clarifies "no drugs", "wasn't threatening [police]", and explains that the 5150 was called in because of a simple dispute between the officers and the individual ("said something mean"). The only thing noted in the reported is the patient being agitated for having to go through the whole ordeal.

The police have refused to hand over the police report related to this particular 5150 to the individual.

Serious medical resources are being used to detain and harass people in Berkeley. Not only does this violate the rights of the individual but it clogs hospitals, distracts doctors, and uses ambulances that should be responding to true emergencies. Medical facilities are not prisons; they are not meant to hold people that cops have person grievances with.

Berkeley police have made it clear that they will continue to misuse the 5150 protocol as well keep the police reports regarding these fake emergencies from public scrutiny. Berkeley Police have made it clear they will continue to randomly label people as psychotic, insane or otherwise out of their own personal agenda. This continuance is alarming, and puts people at risk.
Add Your Comments
§Power connection
by Konsider
Tuesday Jan 19th, 2010 12:05 AM
The reason for police frequently utilizing the method of attributing insanity to people who they happen to dislike for whatever reason, dissent in particular, is a major indication of the disconnect between the police and those they are supposedly sworn to protect. Or perhaps it might be more accurate to describe methods--such as potentially putting a perfectly sane person in a mental hospital by calling in a 5150, or putting an innocent person on death row by contriving evidence--as an indication of a connection. The popular knowledge that law enforcement is "police business", with no room for inquiry, or even recognition, is an understanding that criticism wont be tolerated, and dissent will be punished. This silencing is at the core of the connection between the police and the public, between law and its enforcement in US society.
Add a Comment
§Same Thing Happened to Me
by Frank Miller
Saturday Jan 13th, 2018 4:57 PM
Same thing happened to me. Around 1999 I found my father, who later admitted to molesting me, in a compromising position with a little boy. After I told the parents of my concern, my father flipped and called his friend,deputy sheriff Tommy Avila of the San Bernadino California sheriff's department, to threaten me.

Deputy sheriff Avila started showing up at the house, every Friday, telling me I'd better keep my mouth shut, otherwise he would 5150 me, then nobody would believe me. I was an attorney and told him he couldn't legally do it. He laughed and said he had done it"hundreds of times "when I meet an asshole like you I don't like."

Eventually he tried it. But the doctor at the psyche hospital just laughed when he saw there was nothing wrong with me. Then my dad tried to kill himself and spilled the beans about the whole process
Add a Comment
Support Independent Media
We are 100% volunteer and depend on your participation to sustain our efforts!