Newswire
Calendar
Features
Home
Donate
From the Open-Publishing Calendar
From the Open-Publishing Newswire
Indybay Feature
Publish to Newswire
Add an Event
Related Categories: Santa Cruz Indymedia | Arts + Action | Global Justice & Anti-Capitalism
Amazing Night of Poetry and Performance at SubRosa
by ~Bradley (bradley [at] riseup.net)
Friday Jan 8th, 2010 1:27 AM
I strayed into SubRosa, the infoshop at the south end of Pacific Avenue in Santa Cruz, a quarter past eight on Thursday, January 7th for the weekly Open Mic. It's a fairly small space, so there is no mic, but there was a well-crafted stage to prop up the creative poets, musicians and performers. SubRosa has an effective layout for squeezing in a couple dozen people, and a puppy, as well as low-key lighting which made for a pleasant ambiance. 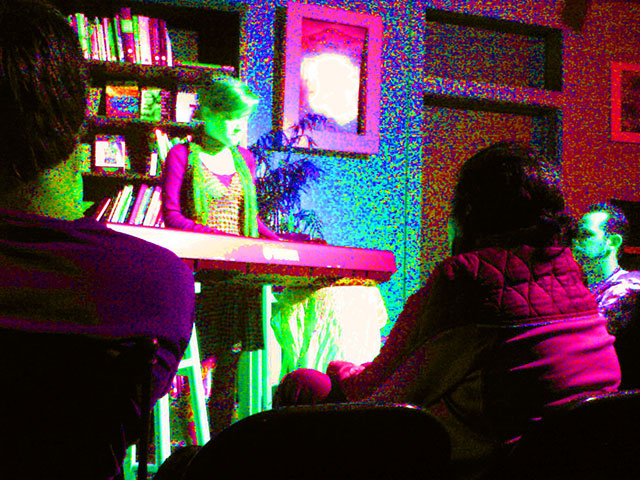 The recipe was right for an amazing night of poetry and performance at SubRosa. UC Santa Cruz is back in session, we're in a new decade and it was the first Open Mic in a few weeks. For these reasons and others beyond our understanding, some of the freshest and finest artists in Santa Cruz came together to realize an incredible evening of Open Mic talent.

The night was hosted by the legendary Jack, who also entertained with some lines he brought together in his notebook. I don't know if the artist lineup was planned out or if it came together by chance, but it was a graceful blending of poets woven between musicians and singers. Each performer was alloted five minutes on stage.

As I walked in, a vocalist and guitarist were singing a beautiful song that I didn't understand in French. Another womyn intermixed poetry with singing backed by a beatboxer in the audience. One persyn played guitar while singing about the friends she misses and a two week romance.

A womyn of small stature brought a large keyboard, and a French accent, through the crowd and onto the stage. Two stools and a scarf were used to support the keyboard as the modest performer melodically sang and played harmonica.

The final performer of the night strummed a guitar and sang about his friends whose lives were heading in a bad direction. Before getting started, he noted that the prior act was a tough one to follow.

The second to last performer began by brushing her teeth on stage, lauding dental hygiene, and lamenting the reality of life without insurance. Then she spoke bluntly about not being intimate with a partner in some months and requested a volunteer. The two began kissing on stage as people blushed, cheered or turned away. Then another volunteer was plucked from the audience for an additional round of kissing. A half dozen people of varying genders took turns making out on stage with the performer.

Attending the Open Mic is a fun way to find friends and locate creative artists. It is also a way to support the only public all-volunteer radical space in Santa Cruz. More information can be found about the weekly Open Mic and SubRosa at http://subrosaproject.org