Schwarzenegger Pledges Education Not Incarceration: So, where’s the Action? 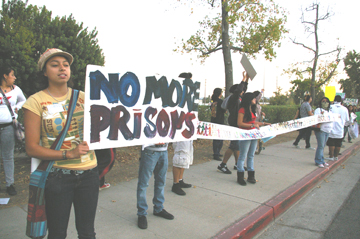 Schwarzenegger Pledges Education Not Incarceration: So, where’s the Action?

Governor Schwarzenegger’s State of the State address today included a proposal to prepare a constitutional amendment to prevent the state from spending more money on prisons than higher education. Yet, his message rings empty to grassroots groups who have spent years highlighting California’s skewed budget priorities.

“If we’ve learned nothing else in the last 6 years, it’s that Schwarzenegger is extremely adept at using prison reform rhetoric to advance the same old prison expansion policies,” noted Lisa Marie Alatorre, Campaign Director for Critical Resistance, an anti-prison advocacy group, and member of Californians United for a Responsible Budget (CURB). “The proposal he has come up with does nothing to insure prison population reduction, or to limit tuition fees at UC, CSU or community colleges.”

The Governor’s hypocrisy is exemplified by his administration’s aggressive resistance to a Federal Court order that would reduce California’s prison overcrowding, saving the state billions of dollars, while improving public safety by reducing the number of people in prison.

“It’s two-faced at best to say you want to reduce prison spending, but then to spend state money fighting the prison population reduction order,” cautioned Manuel La Fontaine of All of Us or None, an initiative to stop discrimination against people with felony convictions, also a CURB member organization.

“If you look closely, he’s arguing for expansion and the total privatization of the prison system, which would be more expensive,” explained Geri Silva of CURB member Families to Amend California’s Three Strikes. “How could higher education spending possibly keep up with corrections spending if California has 25,000 more prison beds, public or private?”

“Things are so bad in California that far-reaching improvements are actually easy to achieve,” explained Diana Block of CURB member California Coalition for Women’s Prisoners. “If the Governor chose to put his political power into any one of the main issues on the table: dropping the lawsuit appeals, implementing basic parole reforms, canceling prison construction, and investing in our communities, we wouldn’t need a constitutional amendment. We need to shift our actual priorities, not our rhetorical priorities.”

Californians United for a Responsible Budget (CURB, is a broad alliance of over 40 organization seeking to CURB prison spending by reducing the number of people in prison and the number of prisons in the state.

http://www.CURBprisonspending.org
END_OF_DOCUMENT_TOKEN_TO_BE_REPLACED
Related Categories: California | Police State & Prisons
Add Your Comments
Support Independent Media
We are 100% volunteer and depend on your participation to sustain our efforts!