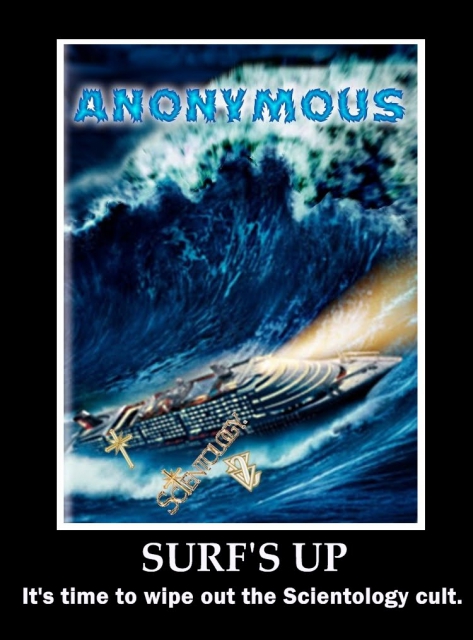 original image (750x1013)
As 2009 comes to a close, the Scientology organization is reeling from another year of high-level defections, criminal convictions, journalistic exposes and books detailing the cult's criminal practices, and intense pressure from human rights activists. The Anonymous global network of human rights activists are keen to hold Scientology's leaders accountable for their crimes, which include organized fraud, human trafficking, kidnapping, obstruction of justice, and toxic waste dumping.

Here are just a few of the many recent victories against the Scientology organization, which until quite recently believed itself immune to all criticism, able to do as it pleased in its insane quest to "clear the planet" of non-Scientologists through the "global obliteration of psychiatry."

These are just some of the many, many excellent wins against the Scientology criminal organization in the past year. Notwithstanding all of Scientology's posturing in incessant floods of press releases about its alleged "explosive growth" and "tremendous worldwide expansion," the fact remains that Scientology is the world's fastest shrinking cult, with perhaps 50,000 people in the world who would be willing to admit their membership.

There aren't any comprehensive worldwide surveys of what people believe, but there is plenty of other evidence to show that there aren't really very many Scientologists in the world.

Scientology's spokesmen have sometimes attempted to refute the statistical estimates by saying that perhaps the respondents were also Christians or members of other religions, and that it is possible to be both a Scientologist and a member of another religion. Such claims are patently false, both in the essentials of belief as well as in Scientology's explicit declaration that "as a practical matter Scientologists are expected to and do become fully devoted to Scientology to the exclusion of other faiths."

Despite Scientology's attempts to create a perception of "massive growth," there is an abundance of evidence, even beyond the census and survey data, that the cult has never been particularly large, and is rapidly getting smaller.

Scientology is much more than just a weird and wacky Hollywood fad, in which celebrities make fools of themselves and provide material for gossip magazines. Beyond its status as a "religion" in the USA, which it obtained through a secret deal with the Internal Revenue Service, and which give it extraordinary benefits not permitted to any other group, Scientology is also a multinational criminal racket. The average person would be shocked to learn the amount of influence Scientology wields, mostly due to blackmailing and intimidation of government officials. Scientology's primary goals are to "clear the planet" and to "obliterate" psychiatry and the mental health profession, replacing it with Scientology. They are prepared to do this by any means necessary, and are adept in using their many front groups to portray the cult as concerned humanitarians. The opposite is true. Indeed, according to L. Ron Hubbard, critics of Scientology are to be considered "fair game," and "[m]ay be deprived of property or injured by any means by any Scientologist without any discipline of the Scientologist. May be tricked, sued or lied to or destroyed." (L. Ron Hubbard, "HCOPL 18 October 67 Issue IV, Penalties for Lower Conditions").

The Anonymous worldwide human rights activists are a network of thousands of ordinary people from around the world who are appalled and horrified by the Scientology organization and its abuses, and are working to stop it.

http://www.xenu-directory.net
Add Your Comments
LATEST COMMENTS ABOUT THIS ARTICLE
Listed below are the latest comments about this post.
These comments are submitted anonymously by website visitors.