Crow Creek: Stolen Lands, Wind Farms and Taking a Stand for the People

The land is owned by Crow Creek Tribal Farms, Inc. a Tribal corporation and distinct legal entity from the Crow Creek Sioux Tribe.

The Crow Creek Sioux Reservation encompasses Buffalo County and portions of Hyde and Brule Counties. Crow Creek Sioux Tribe is consistently documented as one of the poorest Reservations in the Nation, with 78% of their members living below the poverty line. 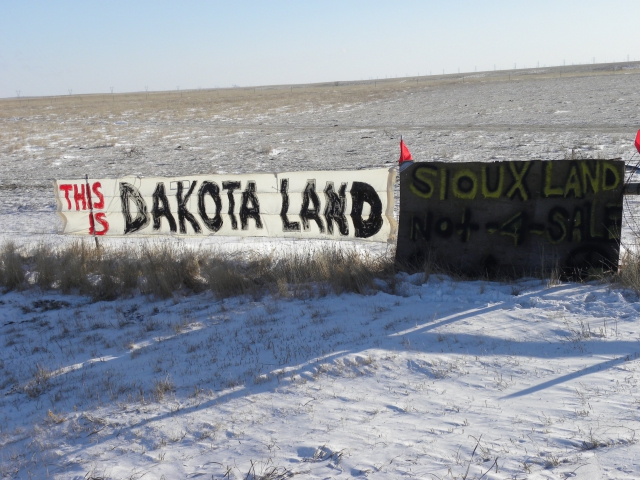 The Crow Creek Reservation is located in South Dakota and was established in the 1868 Fort Laramie Treaty.

Fort Thompson was created as a government operated prison camp. It is now the main community and location of the Tribal headquarters.

The Reservation encompasses a land Area of 125,591 acres.

In November 1862, 1700 Dakota Sioux from Minnesota were forcibly removed to Fort Snelling.

Upon being sentenced as war criminals, 300 men were sent to Mankato. On December 26th, 38 of these Dakota men were publicly hanged in Mankato, which is still known as the largest mass hanging in the United States. This tragedy is known as the Dakota 38.

For the past five years December 13-26, a horse back ride known as “Wokiksuya” makes a 330 mile, 13 day journey from Lower Brule (just a few miles from Crow Creek) ending in Mankato to honor the Dakota 38.

In April 1863 Congress enacted a law, requiring the removal of all remaining survivors of the Dakota Sioux people from their beloved homelands in Minnesota, exiling them to South Dakota. They were forced on steam boats, traveled down the Missouri River and were relocated to Crow Creek.

A harsh winter and lack of nourishment, lead to another 300 hundred Dakota people to perish in horrifying conditions.

The Crow Creek Sioux Reservation encompasses Buffalo County and portions of Hyde and Brule Counties. Crow Creek Sioux Tribe is consistently documented as one of the poorest Reservations in the Nation, with 78% of their members living below the poverty line.

The land is owned by Crow Creek Tribal Farms, Inc. a Tribal corporation and distinct legal entity from the Crow Creek Sioux Tribe.

The 7112 acres are within the boundaries of the original reservation, which was established in the Fort Laramie Treaty of 1868.

In 1889, the government abrogated the treaty, removing portions of Trust land. The 7112 acres were sold to the LeMasters.

The tribe was successful in re-acquiring the land in 1998, incorporating it in the Tribes original treaty lands. In 2000 the Tribal Council passed a resolution requesting the land be put into trust. After nine years, the Tribes request went unresolved. The property was jeopardized and ultimately seized by the IRS.

The Tribe has 180 days from the date of seizure to buy their land back, with an additional penalty of 20% interest.

Ironically, the Crow Creek Tribe has been forced to purchase their treaty land back on two separate occasions, both due to illegal land grabs.

According to the recent motion for temporary restraining order, filed by the Crow Creek Sioux Tribe, the IRS seized and auctioned the land to recover $3,123,789.73 dollars in unpaid employment taxes. The document states, Because of erroneous tax advice received from the Bureau of Indian Affairs, the Crow Creek Sioux Tribe became delinquent in the payment of employment taxes collected by the IRS beginning in 2003. The BIA had informed the Tribe that, because it was a federally recognized Tribe, it was not necessary to pay federal employment taxes.

The IRS is not a government agency. It is an agency of the International Monetary Fund.

Chairman Sazue in a recent interview with First Voices Indigenous Radio stated, due to the IRS’s allegations of unpaid employment taxes, every tribal council member that has been elected since this occurred, has had their personal income taxes seized. Because of the astronomical amounts owed, they will never see their income tax refunds again.

At this point, it is unknown how much money the IRS has previously seized prior to auction, from the Tribe or Council.

This action taken by the IRS could ultimately set precedence, allowing the continual land grab on Tribal Lands.

The Tribes appeal Court date has been set for March 29th and 30th, in Rapid City South Dakota.

This particular section of land is located within a portion of the United States that is targeted for prime wind energy, ranking 3rd in the country.

The Tribe has plans for the property, to create a wind energy farm. This would be an economic solution and benefit, to bring the Tribe out of these impoverished conditions.

Fort Thompson also has the largest electricity sub stations in United States. The Army Corp of Engineers flooded the Missouri River, which forced the Tribe to move to higher ground, loosing a portion of their established land base.

The Big Bend Dam was created with hydro electricity. The Tribe was promised life time free electricity, which they have never received.

Instead, the Tribe pays some of the highest electricity rates in the State. Tribal members live below the poverty line and most can not afford to pay their electric bills. In sub zero winter temperatures, the electric company continues to turn off power due to non payment, even when payment arrangements have been made. This is illegal if a person is continuing to make payments as per their arrangements. Unfortunately, the power company continues to get away with it.

The organization Can-Do has been documenting these events and provides video on this tragedy. Eric Klein, founder of Can-Do has also been assisting in documenting the land seizure issue and is currently on the Dakota 38 horse ride.

This is a disgraceful and appalling act; the Tribe is entitled to receive free electricity, since the sub station is on their land!

Sioux Land is NOT For Sale!

Chairman Brandon Sazue has been occupying the land since December 7th, vowing he will not leave the land until it is rightfully returned to the Tribe.

Sazue is camped in a travel trailer on the land in sub zero temperatures. The Chairman has invited supporters and people from all nations to join him in the struggle. Bring your tipi’s and come show your solidarity and support.

Cante Tenza known as The Strong Heart Society, has responded to the call and has been assisting Chairman Sazue in his efforts.

Mo Brings Plenty, a Oglala Lakota activist and member of the Society was at the location all this week. He has been helping the cause and providing a voice in the plight for justice. Duane Martin, a leader of Cante Tenza was also on location this week.

“No Trespassing” signs have been posted around the perimeter of the seized property, warning the IRS and other agencies to keep out.

Signs were prepared with prayer ties in all four colors.

There are currently 2447 signatures of support. The petition can be found at
http://www.petitiononline.com/CrowCrek/petition.html .


Someday, your Tribe could wake up and walk these footsteps, when your land has been stolen, yet again.

There is no greater atrocity than the continual violation of treaty rights and obligations to honor them.

Updates and additional info can be found on http://www.NDNnews.com . Email NDN [at] NDNnews.com

No part of this article may be reproduced or published without prior consent. 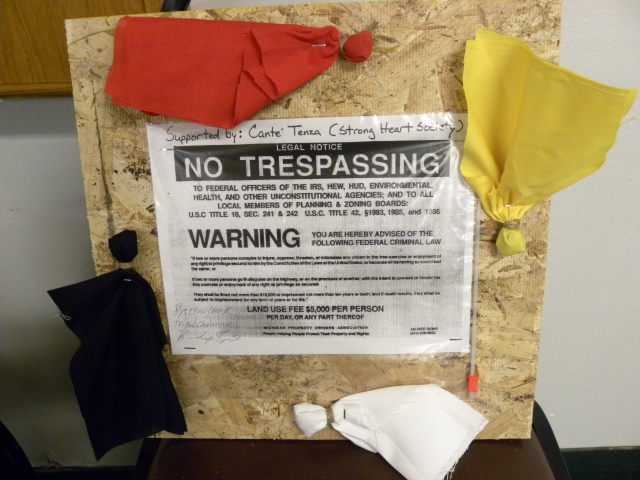 Add Your Comments
Latest Comments
Listed below are the latest comments about this post.
These comments are submitted anonymously by website visitors.
TITLE
AUTHOR
DATE
crow creek: stolen land
shahelah golden wheeler
Support Independent Media
We are 100% volunteer and depend on your participation to sustain our efforts!