Add an Event
Newswire
Calendar
Features
Home
Donate
From the Open-Publishing Calendar
From the Open-Publishing Newswire
Indybay Feature
Publish to Newswire
Add an Event
Related Categories: San Francisco | Education & Student Activism | Police State & Prisons
SFSU Occupation Solidarity on 19th Street, 12/10/09: photos and video (3 of 3)
by dave id
Sunday Dec 20th, 2009 1:09 PM
San Francisco State University students occupied the College of Business building (later renamed Oscar Grant Memorial Hall by students) and barricaded the doors from the inside at about 4am on December 9th, 2009. On the outside, students and other supporters protected the occupation by blocking the doors with their bodies throughout 24-hour occupation. After California State University and San Francisco police raided the building at about 4am on December 10th, students in solidarity moved to 19th Street and attempted to block police vans from removing arrested occupiers. 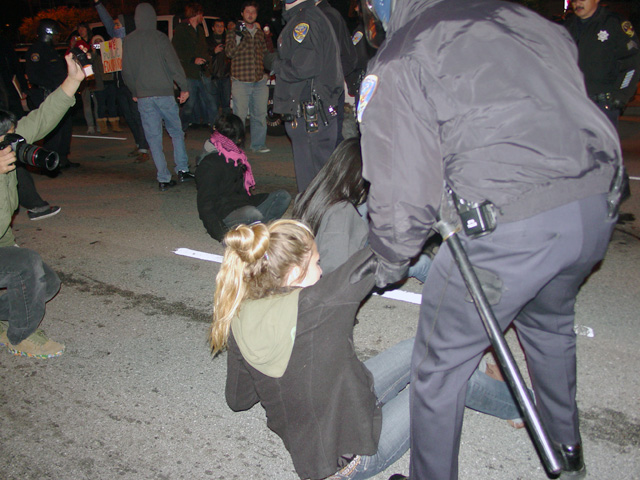 These are amongst the first to sit down and block 19th Street. Police promptly dragged them away, adding to the numbers of those arrested in the early morning. This is in the area labeled "f" in the map from the previous SFSU occupation report. (Also see map for other letter and number references below.) 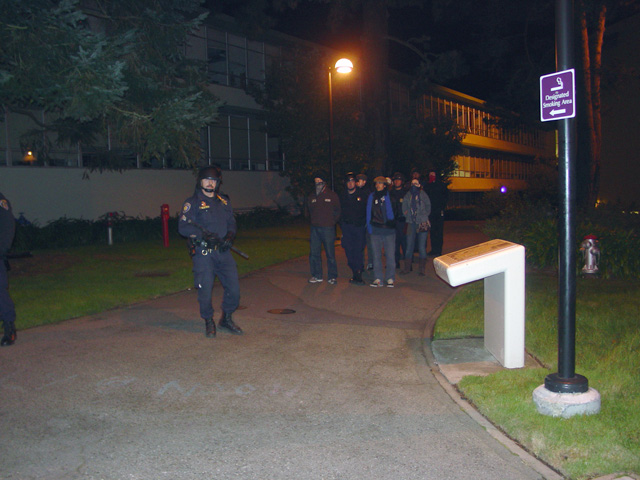 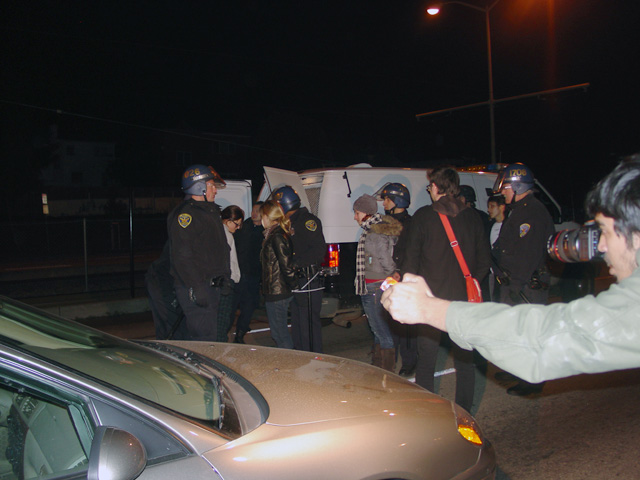 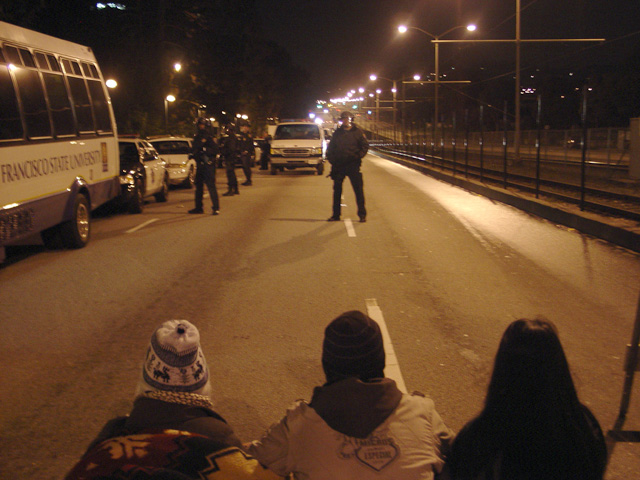 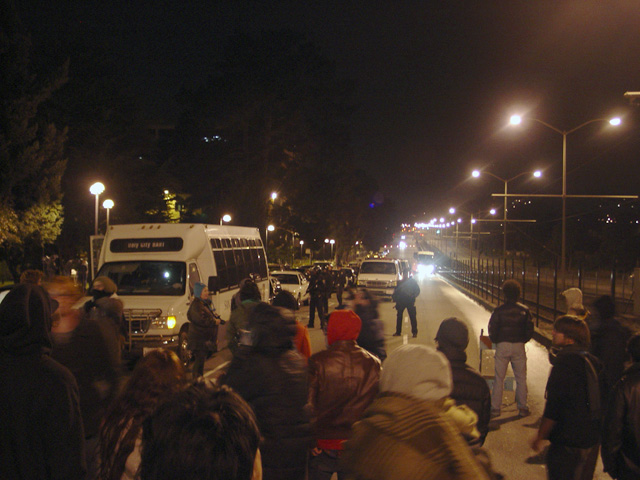 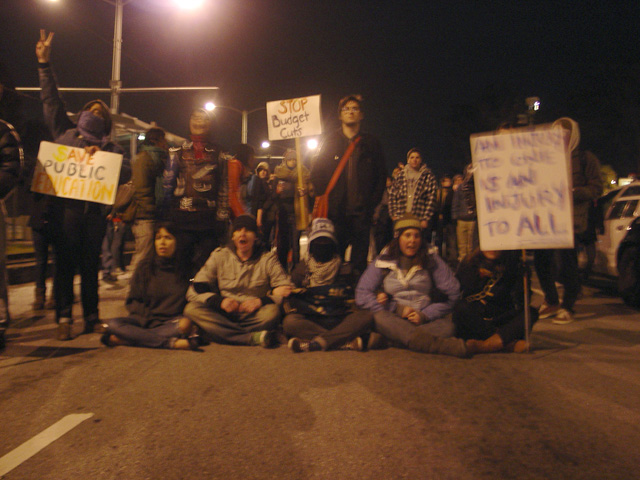 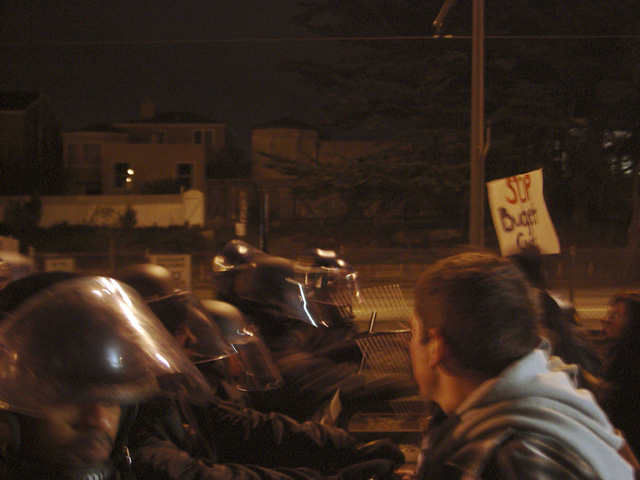 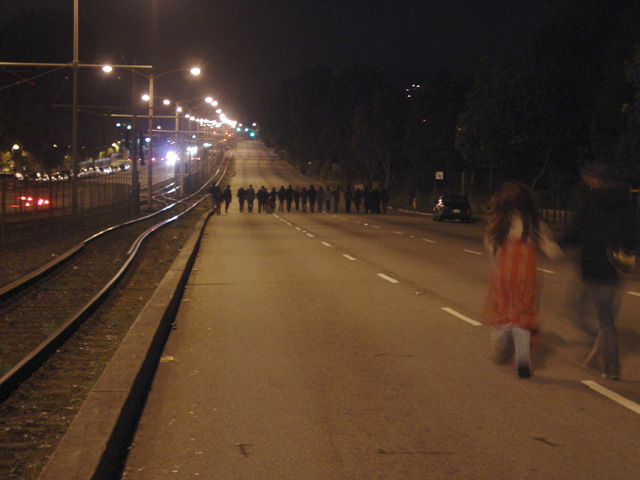 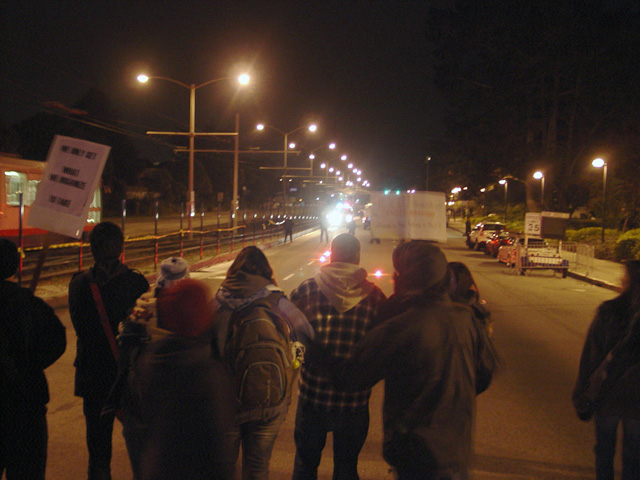 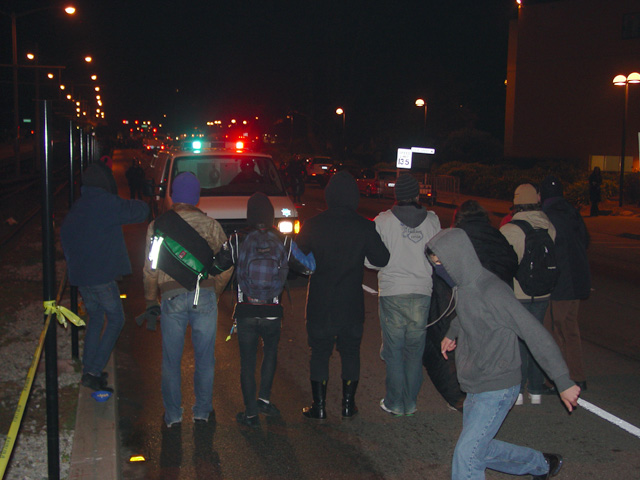 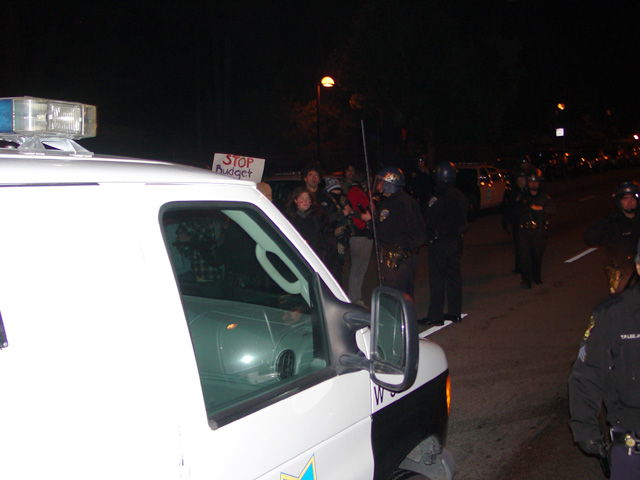 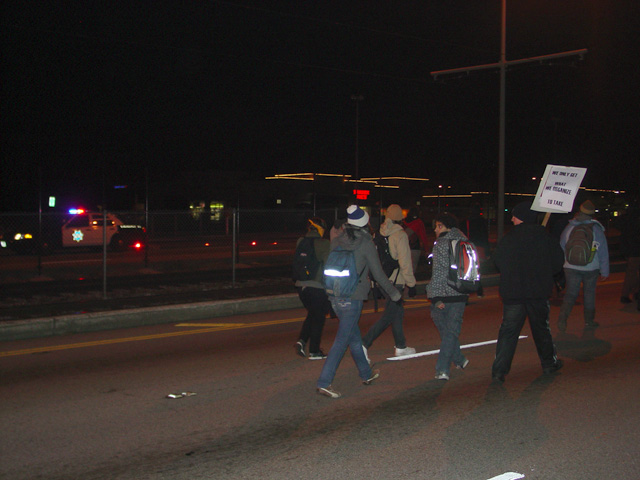 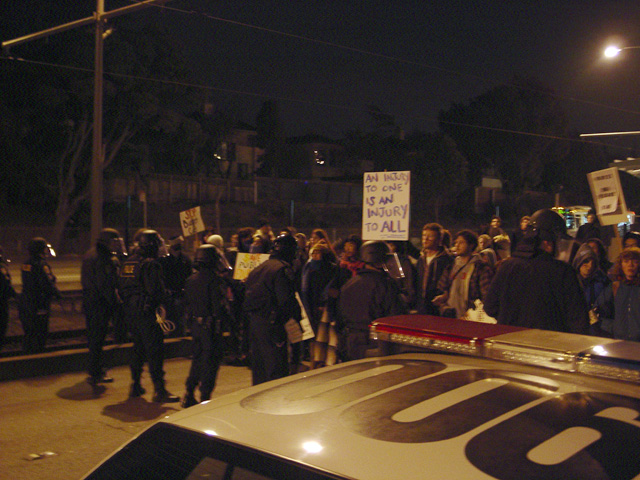 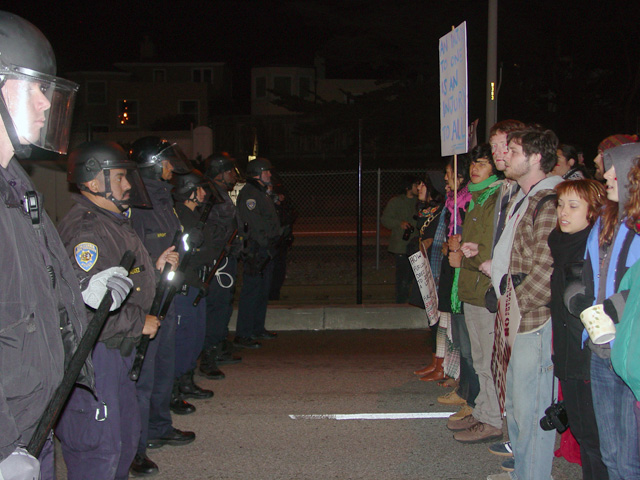 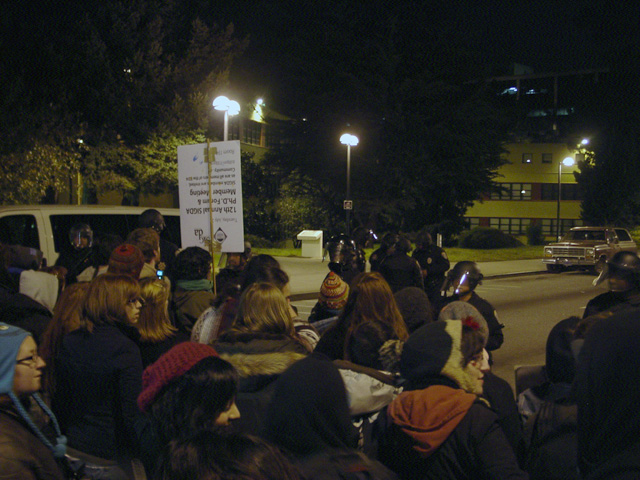 Police reached agreement with solidarity demonstrators to re-open 19th Street if location of arrestees was revealed. Those arrested were cited and released at nearby Stonestown Galleria shopping center parking lot and were welcomed back by dozens who had arrived in support.
http://www.indybay.org/newsitems/2009/12/1...
§f: corporate media makes the scene in time for morning TV shows
by dave id Sunday Dec 20th, 2009 1:09 PM 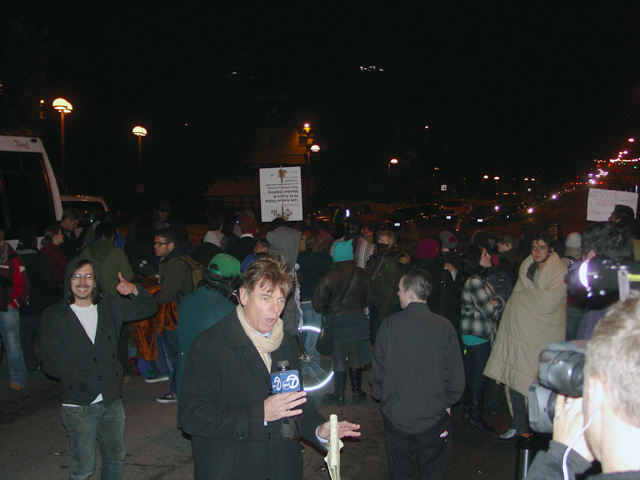 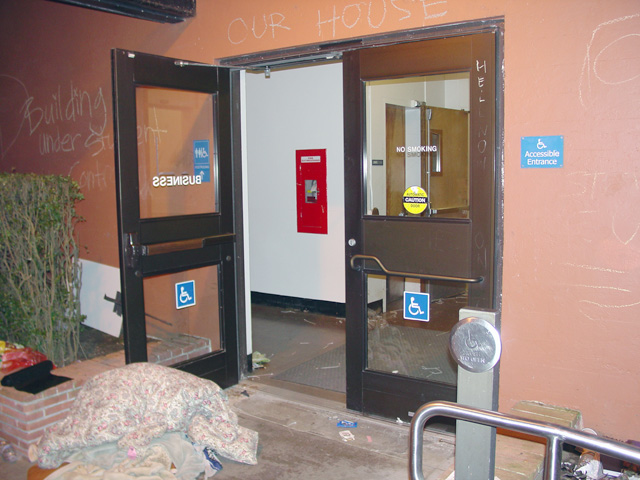 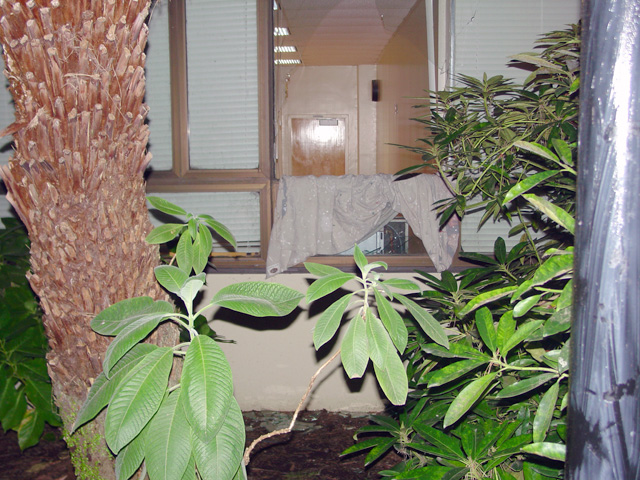 §Thanks a lot for your posts!
by Luz
Sunday Dec 20th, 2009 5:10 PM
Good to see that you're doing well and back to reporting. These posts offer great insight into the movements of police officers and the way students resisted seeing their comrades dragged away after an intense 24-hour occupation.
Add a Comment
§Occupied
by williamjames
Sunday Dec 20th, 2009 5:51 PM
Excellent! Can't wait for the next one...
Add a Comment
§beautiful resistance
by aaaaaa
Monday Dec 21st, 2009 1:23 PM
everyone who was there inside and outside were totally amazing and inspiring!

this is how we fight! this is how we win!
Add a Comment
Support Independent Media
We are 100% volunteer and depend on your participation to sustain our efforts!