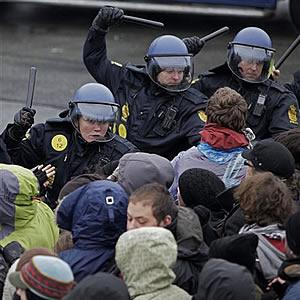 Because the US and other wealth climate polluting nations refuse to significantly reduce climate pollution and to pay our ecological debt to climate-impacted developing world and because of the lack of democracy in the UN climate talks. On Tuesday, US climate negotiator Todd Stern said he foresees no change in President Obama's offer to cut emissions by 17 percent of 2005 levels by2020. The proposal has been widely criticized because it amounts to just a four percent cut when adopting the 1990 emission standard used by the rest of the world. Scientists call for a 40% cut by 2020in order to prevent an environmental and humanitarian catastrophe. Meanwhile, developing countries including the US, UK and Denmark drafted and circulated a document to completely circumvent the UN from all further future negotiations.

Accredited civil society groups including Friends of the Earth, Avaaz, Tck Tck Tck, Via Campesina have been banned from the UN Climate Conference. "The surgical removal of non governmental organizations underscores the lack of democracy inherent in these negotiations. The only way to avoid catastrophic climate change is fully supporting and including peoples movements like the very ones illegitimately removed from this process.," said Professor Micheal Dorsey, a member of the Climate Justice Now! Network.

SIGN A PETITION TO THE DANISH GOVERNMENT HERE:
http://www.petitiononline.com/Tadzio/petition.html

END_OF_DOCUMENT_TOKEN_TO_BE_REPLACED
Added to the calendar on Thu, Dec 17, 2009 4:51PM
Add Your Comments
Support Independent Media
We are 100% volunteer and depend on your participation to sustain our efforts!