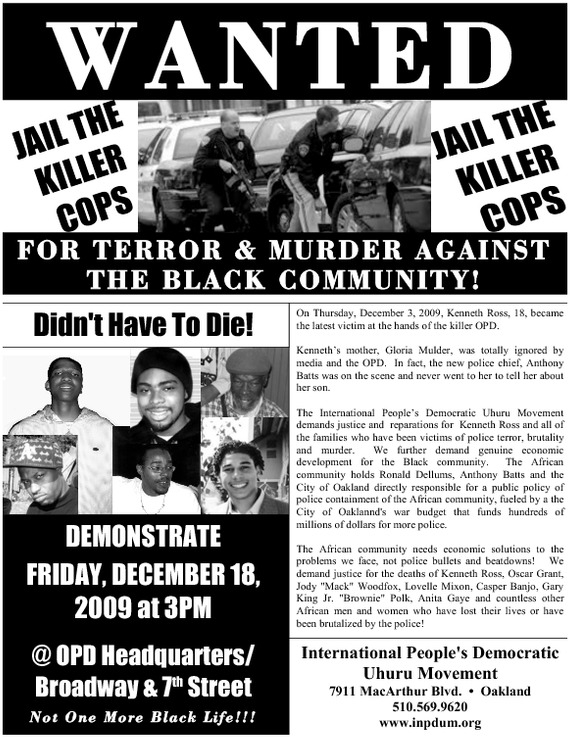 What: Justice for the Murder of Kenneth Ross by Oakland Police & All Victims of OPD Violence
When: Friday, December 18, 2009, 3pm
Where: Oakland Police Department Headquarters, 7th and Broadway
Contact: (510) 569-9620

On Friday, December 18th, 2009 at 3pm, the International People’s Democratic Uhuru Movement Oakland branch, along with friends and family of Kenneth Ross, will demonstrate their outrage at the latest killing of a young African by the Oakland Police Department and to demand economic development for the impoverished communities of East and West Oakland, not police containment.

On Thursday, 18 year old Kenneth Ross was shot multiple times in the back by Oakland police officer while he was running away. Another young man was shot in the buttocks.

The African community in Oakland lives under a policy of police containment. Exposed for the brutality of the “Oakland Riders” who beat suspects, planted evidence and brutalized the African community of West Oakland, the Oakland Police Department has been under scrutiny for its heavy handed policing that has resulted in the killings just last year of 70 year Black Arts figure Casper Banjo, Jody Woodfox, high school student Jose Luis Buenrostro and countless others before them.

The new police chief Anthony Batts has come in with a vengeance to attack the victims of police containment. In fact Batts, offered no words at all to the mother of Kenneth Ross, who stood on the street for hours following the shooting and was not given access to see her son.

The International People’s Democratic Uhuru Movement demands justice for Kenneth Ross, reparations the family of Kenneth Ross, reparations for all victims of police terror, brutality and murder. We demand genuine economic development for the Black community. The African community holds Ronald Dellums, Anthony Batts and the City of Oakland directly responsible for a public policy of police containment of the African community where half of the city’s budget goes towards police services and a tiny fraction towards economic development that would transform the terrible conditions in the community.

Added to the calendar on Thu, Dec 17, 2009 6:54AM
Add Your Comments
Support Independent Media
We are 100% volunteer and depend on your participation to sustain our efforts!