Australia: Koalas threatened by Climate Change according to IUCN report

by Takver - Australia Indymedia
The Koala, an iconic Australian marsupial, has been identified by the prestigous International Union for the Conservation of Nature as under threat from climate change in a new report released in Copenhagen. 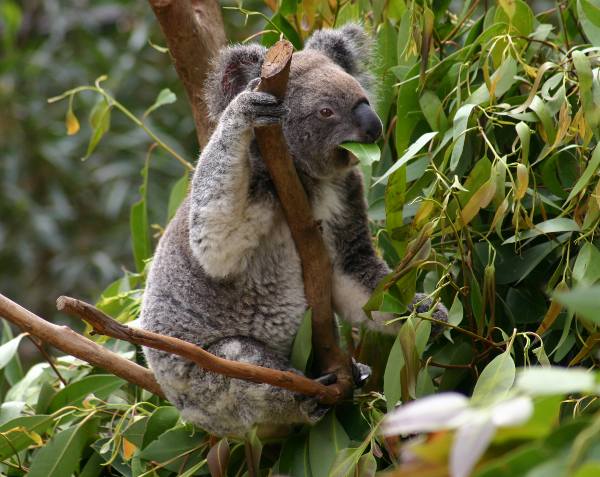 The Koala is an arboreal marsupial found from north Queensland, New South Wales, Victoria and South Australia in Eucalypt woodland habitat. It is an iconic animal strongly identified with Australia. In November 2009, 20 of Australia's leading koala scientists met with the Government's Threatened Species Scientific Committee head to review the plight of Australia's koala population.

Except for two koala populations in Victoria (Cape Otway and the Strathbogie) and one in South Australia (Adelaide Hills), Australian Koala Foundation (AKF) scientists who attended the meeting, said there was a general consensus that the koala was in dire straits along the east coast of Australia and should be listed as vulnerable.

For the Koala, climate change may well spell extinction. Although CO2 is well known for stimulating plant growth, it also acts to reduce the plant nutritional quality. The Koala selectively feeds on the leaves of a few Eucalyptus species. Increased atmospheric CO2 will cause nutrient yield to drop and as a result, Koalas may no longer be able to meet their nutritional demands, resulting in malnutrition and starvation.

"My view of koalas is that the strong connection between food quality and demography means that they are particularly vulnerable to climate change. Elevated atmospheric CO2 reduces the amount of protein available from Eucalyptus leaves for animals. This Eucalyptus-marsupial system is one of the very few examples in which the direct effects of CO2 can be linked to populations of wild mammals." says William Foley from the University of Sydney in the report.

Increasing frequency and intensity of droughts also forces Koalas to descend from trees in search of water or new habitats. This makes them particularly vulnerable to wild and domestic predators, as well as to road traffic, often resulting in death.

With extreme bushfire weather becoming more frequent and intense, koala populations are on the frontline of the effects of climate change unable to flee from an inferno. One of the iconic images of the Black Saturday fires in Victoria that killed 173 people was of a CFA volunteer sharing a bottle of water with Sam the Koala.

Destruction of habitat, the Clamydia disease, continued logging of old growth forests and encroachment and isolation of remaining Koala populations are also factors in the decline of Koala numbers.

The report stresses that Koalas have very limited capability to adapt to rapid, human-induced climate change, making them very vulnerable to its negative impacts.

"Humans are not the only ones whose fate is at stake here in Copenhagen - some of our favourite species are also taking the fall for our CO2 emissions," says report co-author Wendy Foden. "This report should act as a wake-up call to governments to make real commitments to cut CO2 emissions if we are to avoid a drastically changed natural world. We simply don't have the time for drawn-out political wrangling. We need strong commitments and we need them now."

Deborah Tabart from the Australian Koala Foundation, presently in Copenhagen, urged Prime Minister Kevin Rudd to use his international platform at Copenhagen to announce the listing of the koala as an endangered species under the Environment Protection and Biodiversity Conservation (EPBC) Act.

"This is an opportunity for the Australian government to make a commitment to not only the protection of one of its beloved icons, but to protecting its habitat - the Eucalyptus forests." she said. "I don't understand how Mr Rudd can tell developing nations not to destroy their native forests, when he refuses to protect the koala forests which are in his own backyard. The trees in these forests store tonnes of carbon and protecting them is a vital step towards fighting climate change and reducing Australia's emissions."

According to Australia Koala Foundation research estimates of the koala population might be as low as 43,000 and no higher than 80,000.

Add Your Comments
Latest Comments
Listed below are the latest comments about this post.
These comments are submitted anonymously by website visitors.
TITLE
AUTHOR
DATE
two bush koalas - a Youtube Star found on 1Feb09 & the injured koala found on 6Feb09
maryann martinek, Australia
Support Independent Media
We are 100% volunteer and depend on your participation to sustain our efforts!