by Mike Rhodes (editor [at] fresnoalliance.com)
Actions in support of Fresno’s homeless are continuing this holiday season. The City of Fresno has dodged a bullet for the moment - they will not be put in the awkward position of dragging baby Jesus out of a manger and throwing him into a dumpster. Photo below: Al Williams speaking at the Press Conference. Photo by: Nigel Medhurst. 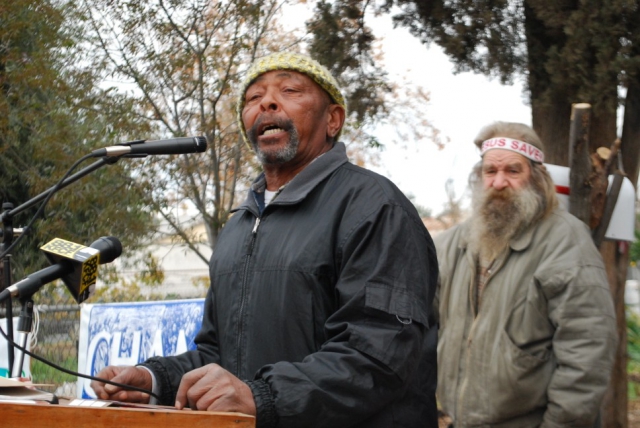 original image (968x648)
Homeless rights activists forced the City of Fresno to back down on threats to evict residents at a homeless encampment at Ventura and F streets. The city had posted eviction notices on December 2 saying that they were going to “clean up” the encampment The notice said "On Wednesday, December 16 the City of Fresno will conduct a clean-up of the area, including the removal of all individuals, personal property, junk and/or garbage from this area.

Homeless advocates pointed out to the city that this eviction of the homeless was going to take place 9 days before Christmas, and that if they proceeded a manger scene was going to be constructed at the encampment depicting the birth of Christ. City officials decided that it would not look good to have city workers destroying the manger and dragging baby Jesus off to a dumpster.

A couple of hours before homeless advocates held a press conference calling on the city to (among other things) halt the December 16 eviction, they were handed a flier announcing a new date for the eviction - January 6. While postponing the eviction until after the holidays was announced as a victory, it is in reality only a temporary reprieve for the homeless who have nowhere to go.

The City of Fresno refuses to provide a legal, safe campground where the homeless can live. They are chased by city officials from a dry spot under a bridge, to a vacant lot, and then forced to move from there to a sidewalk down the street. The result of not allowing the homeless to legally live anywhere is that the city has criminalized poverty.

The irony of the January 6 date is that the city has moved the eviction date of the homeless from 9 days before Christmas to the Feast of the Epiphany, another religious holiday. Homeless advocates in Fresno are hoping that city officials have an “epiphany” about their bankrupt homeless policy and stop constantly attacking them.

The following statement is from the Thursday, December 10 Human Rights Day press conference and articulates some of the concrete proposals being promoted by Fresno Homeless advocates:

A Press Conference will be held on Thursday, December 10 at 2 p.m. at the Pam Kincaid Neighborhood Center, located at 1026 Mariposa street in Fresno. Speakers will call on the City and County of Fresno to end homelessness. The speakers will connect the need for affordable and decent housing in Fresno with the United Nations Human Rights Day activities happening throughout the world.

Here is what Article 25 of the Universal Declaration of Human Rights (UDHR) says:

“Everyone has the right to a standard of living adequate for the health and well-being of himself and of his family, including food, clothing, housing and medical care and necessary social services, and the right to security in the event of unemployment, sickness, disability, widowhood, old age or other lack of livelihood in circumstances beyond his control.”

Ed Castro, an organizer with Journey for Justice, will make a brief statement about Human Rights Day and the Universal Declaration of Human Rights. This will be followed by Rev. Floyd D. Harris, who will speak for the local group of homeless advocates who have organized this press conference. Harris will outline the City of Fresno's failure to adequately address homelessness and the City’s shockingly callous eviction of homeless residents at Ventura and F streets, 9 days before Christmas. Since Gregory Barfield was hired as the city’s homeless czar, the situation for the homeless has worsened. The city used to provide portable toilets and trash pick up for the homeless but these services have ended. Now they are evicting the homeless, forcing them to move from one god forsaken vacant lot to another - giving them no legal place to camp. Harris will call on the city to set up campgrounds where people are safe and have toilets, trash pick up and running water, along with their full array of Constitutional rights.

Harris will also make a concrete proposal about how this city can end homelessness immediately. There are hundreds of bank owned, foreclosed, vacant houses in Fresno. A map of those homes will be available at the press conference. Harris will propose that the banks, which the taxpayers have bailed out, should invite homeless families to be caretakers of those homes until they are sold. If the owners of all of the vacant homes that are for sale in Fresno were to do the same, homelessness would be ended. The caretakers would move to another for sale home within 20 days of when the house they are living in is sold. Harris will also be calling on the police chief and sheriff to stop participating in evictions of foreclosed homes.

Al Williams, a homeless veteran will speak about the reality of life on the streets, and say that there are people dying because of exposure to the cold and rain. Williams will provide the press with photos showing how some homeless people are moving into abandoned houses to survive. Williams will tell the press what it is like to walk by bank owned, foreclosed, vacant houses that could save his friends lives - when the only alternative is to live in a field that the city could declare illegal at any time.

Homeless advocates will also link the money wasted on the endless wars in Iraq and Afghanistan to the lack of resources available locally to end homelessness.

###
END_OF_DOCUMENT_TOKEN_TO_BE_REPLACED
§Audio from the Press Conference
by Mike Rhodes
Listen now:
Copy the code below to embed this audio into a web page:
Download Audio (17.2MB) | Embed Audio
18:47 audio from Fresno homeless activists Human Rights Day press conference. First you will hear the Raging Grannies singing a couple of our favorite songs. The Grannies are followed by Ed Castro, an organizer for Journey for Justice, who helped organize the event. Next is Rev. Floyd D. Harris, president of the National Network in Action, who demands housing for the homeless and offers some concrete solutions to end homelessness. 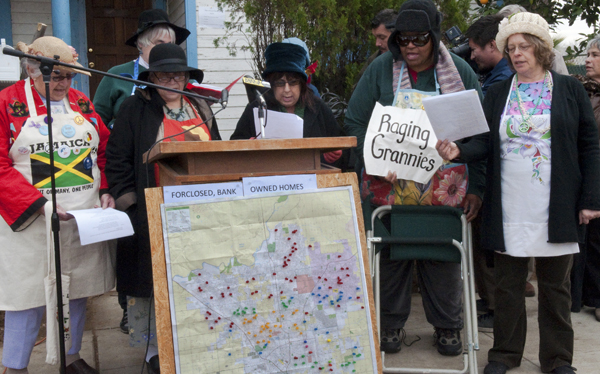 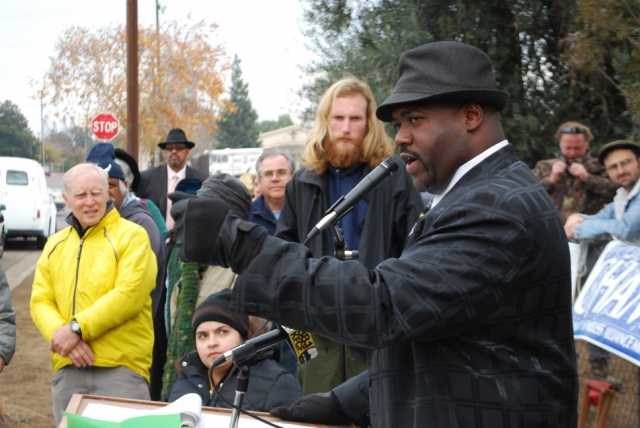 END_OF_DOCUMENT_TOKEN_TO_BE_REPLACED
§Al Williams (2:47 audio)
by Mike Rhodes
Listen now:
Copy the code below to embed this audio into a web page:
Download Audio (2.5MB) | Embed Audio
Al Williams, who is homeless, spoke at the press conference. In his talk, Williams refers to federal stimulus money that the City and County of Fresno have been given to assist the homeless. That money, which was available on October 1, 2009 has not been used. While homeless czar Greg Barfield sits on that money, homeless people are dying on the streets of Fresno. Williams is demanding that the money be used for direct assistance to the homeless and that it not go to increase the wealth of poverty pimps in the area.

END_OF_DOCUMENT_TOKEN_TO_BE_REPLACED
Add Your Comments
Comments (Hide Comments)
§Eviction Delay May Save Lives
by Ken Hudson (kenhudson2 [at] gmail.com)
While it may seem as only a minor victory to have forced the city to delay the eviction by three weeks, that delay may actually save someone's life in these wet and freezing temps we've been having. Great job!
Add a Comment
§UN Declaration on Human Rights
by Stephen Malm
This conference was an intelligent application of the Declaration of Human Rights to show the basis for all rights is accessible food and housing. It made an invisible problem more visible.
Add a Comment
§I agree
by Yann
Thanks for your post, man ! horaire de priere
Add a Comment
§unjust war, illegal violence
by hansel
When is America going to learn its lessons about improving living conditions and working conditions as number one on the agenda of the worlds life tree. Sure they gained paradise, but that was only three hundred years ago, and now the maximum profits are happening to destroy that paradise by polluting the environment they live in. They are as the empires before them , in that they turn the truth on its head, BY BLAMING AND CRIMINALIZING THE POOR WORKERS WHO DID NOT CAUSE THE TROUBLE IN THE FIRST PLACE. There is no justice to their laws and no peace to their nations because of it. They really are evicting the world and its ecological balance. How many kids you kill today. How many wars you start around the world. Hardly the spirit of Santa Clause and the ellves. Housing not evictions.
Add a Comment
Support Independent Media
We are 100% volunteer and depend on your participation to sustain our efforts!