Add an Event
Newswire
Calendar
Features
Home
Donate
From the Open-Publishing Calendar
From the Open-Publishing Newswire
Indybay Feature
Publish to Newswire
Add an Event
Related Categories: International | Environment & Forest Defense
Scientist: Extinction threatens Coral Reefs unless CO2 limited to 350ppm
by Takver - Australia Indymedia
Wednesday Dec 9th, 2009 6:51 PM
COPENHAGEN. Dec 9, 2009. Extinction of Coral reefs and 10-20% of marine species is likely if greehouse gases aren't brought down to 350ppm, warned Professor Ove Hoegh-Guldberg from the University of Queensland. He gave a presentation at the US Pavilion at the COP15 climate negotiations in Copenhagen about the threat of climate change to the world's coral reefs. Over 500 million people living in approximately 90 nations are dependant in some way on coral reefs. 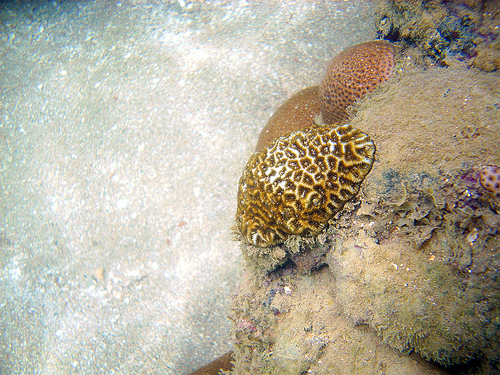 Professor Ove Hoegh-Guldberg was a contributing author to the International Panel on Climate Change (IPCC) report in 2007, which shared the Nobel Prize with Al Gore.

"Carbon and coral reef ecosystems are not sustainable at temperatures that increase up to 2 degrees above the pre-industrial or concentrations of CO2 above 450ppm."

"Eliminating these habitats will inevitably lead to about 10 to 20% of marine biodiversity going extinct. Thats all those organisms that are highly dependant on coral reefs. And losing coral reefs will have enormous issues for 500 million people living in approximately 90 nations."

"In the longer term we will have exacerbation of the problems of storm damage and sea level rise if we lose the coastal protection service that coral reefs provide."

"So one of the most difficult things for scientists to do in a policy environment that finds it difficult to deal with emissions is to tell the truth. Now the truth is that coral reefs don't do well above about 350ppm CO2."

"So any pathway in terms of policy has to bring CO2 down below 350ppm. Otherwise we are not going to have coral reefs. And on that pathway we must minimise the amount of time where we get close to 450ppm and these thresholds that are looming. This means some dramatic reductions in emissions. If we don't make that decision, there is a lot of peoples livelihoods hanging in the balance."

Marine scientists have been at the forefront of calling for strong and rapid action on Climate Change with Australian scientists releasing a Marine Report Card in November 2009.

In January 2009 150 Marine Scientists from around the world issued the Monaco declaration warning that "Ocean acidification could affect marine food webs and lead to substantial changes in commercial fish stocks, threatening protein supply and food security for millions of people as well as the multi-billion dollar fishing industry."

“The chemistry is so fundamental and changes so rapid and severe that impacts on organisms appear unavoidable.” said James Orr of the Marine Environment Laboratories (MEL-IAEA) and chairman of the symposium. “The questions are now how bad will it be and how soon will it happen."

Scientists at the Australian Institute of Marine Science in Townsville claimed in January 2009 that coral on Australia's Great Barrier Reef reached a tipping point in 1990 with coral growth having slowed by more than 14 percent since then.

Reef corals create their hard skeletons from dissolved materials in seawater. As human induced climate change has injected growing amounts of carbon dioxide into the atmosphere, the worlds oceans have absorbed carbon dioxide making them more acidic which effectively reduces the ability of marine organisms to form skeletons. This will effect the whole food chain in the ocean.

Dr Glenn De’ath said that the severe and sudden decline in calcification was an unprecedented occurrence in the last 400 years. "The causes of this sharp decline remain unknown, but our study suggests that the combination of increasing temperature stress and ocean acidification may be diminishing the ability of GBR corals to deposit calcium carbonate," he said.