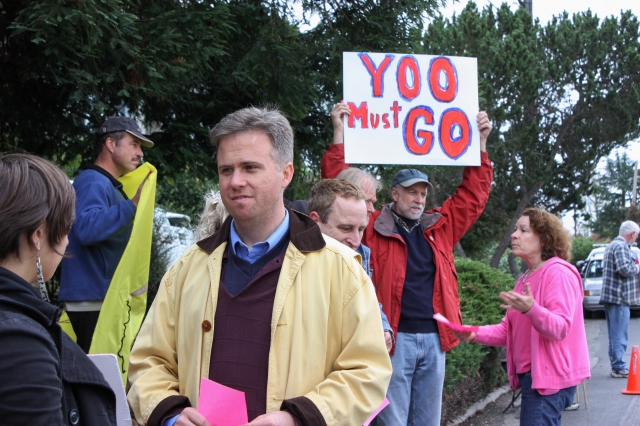 original image (4272x2848)
We had the best turnout ever on Nov. 22 to protest "torture professor" John Yoo at his house! It was simply amazing! There were about 30 people there for an hour or more, holding banners and signs, singing, and sharing their hopes for John Yoo's future as part of the "Yoo Banishing Ritual". The protest was peaceful, and after 30 minutes or so we were joined by the U.C. Police, and ten minutes later by the Berkeley Police. That swelled the group to about 40. The police were there to observe and make sure everyone was safe and legal. They asked us to unblock Yoo's driveway --we had police crime scene tape across the driveway-- so they could go up to his house, making me wonder if he was home and had called them, but other than that they didn't interact with us much. Yoo's next door neighbors came home while we were there. We have a good relationship with them-- they support what we're doing and want Yoo prosecuted.
The banners and signs said "Shame on Yoo", "Arrest John Yoo", "WANTED (under Yoo's photo) for Conspiracy to Commit Torture". Dave brought a beautiful, handmade banner with the iconic hooded detainee with electric wires on his hands and wearing a shroud saying "Cal" (the UC Berkeley name). Lots of cars slowed and drivers honked and called out encouraging words like "arrest Yoo", "fire the torturer" and thanked us for what we were doing.
David Swanson asked if Yoo was home. We decided to go find out. A group of ten trudged up the driveway to ring Yoo's doorbell. We wanted to ask him why he felt it was necessary to torture detainees and how he could conclude that it was legal to do so, since it's never legal to torture. There was no answer, although someone was seen inside. A few minutes later the UC Police arrived; Yoo may have called them.
We sang the great song "Tell John Yoo That Torture Is A Crime" to the tune of "We Shall Not be Moved", with wonderful lyrics by Vic Sadot. Voices rang out with "Tell Eric Holder to prosecute John Yoo, Tell Eric Holder to prosecute John Yoo, Just like the Nazis at the Nuremberg trial, Prosecute John Yoo!" and "Tell Obama justice must prevail, tell Obama justice shall prevail, Just like the truth is marching ever onward, Put John Yoo in Jail!"
For the "Yoo Banishing Ritual" we wrote our hopes for John Yoo's future on pieces of paper (no violent sentiments), read them aloud, and burned them as we said "So Mote It Be" to make them reality. Some of the hopes were that Yoo becomes apologizes for his actions; others were for his dismissal, disbarment, investigation, prosecution to the full extent of the law.
We'll be at Yoo's house again on Sunday, Dec. 13, 11am-12 noon. and monthly through the spring semester. Send an email to cynthia_papermaster [at] yahoo.com to receive notices of Yoo protests.
Thanks to all who showed up to support this action. You cared enough to step up, and that's what we need to bring Yoo to justice.
Cynthia Papermaster, Berkeley, CODEPINK Golden Gate Chapter, http://www.codepinkgoldengate.org
http://www.codepinkgoldengate.org
§Singing "Tell John Yoo That Torture Is A Crime"
by Cynthia Papermaster Wednesday Dec 9th, 2009 1:10 AM 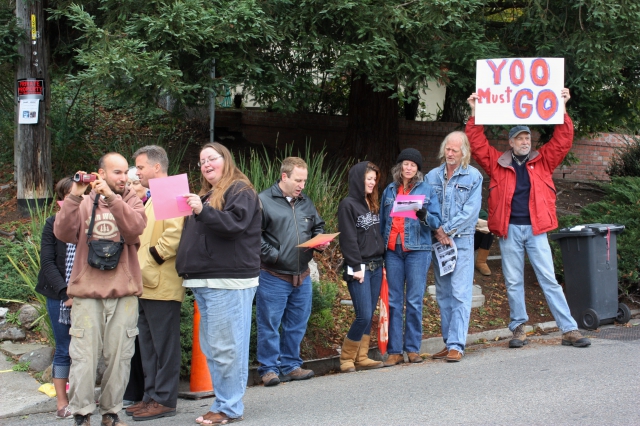 original image (4272x2848)
Hear the song in this video of "Tell John Yoo That Torture Is A Crime" http://www.youtube.com/watch?v=aDEDCwhmyNg
http://www.codepinkgoldengate.org
§David Swanson at Yoo's
by Cynthia Papermaster Wednesday Dec 9th, 2009 1:10 AM 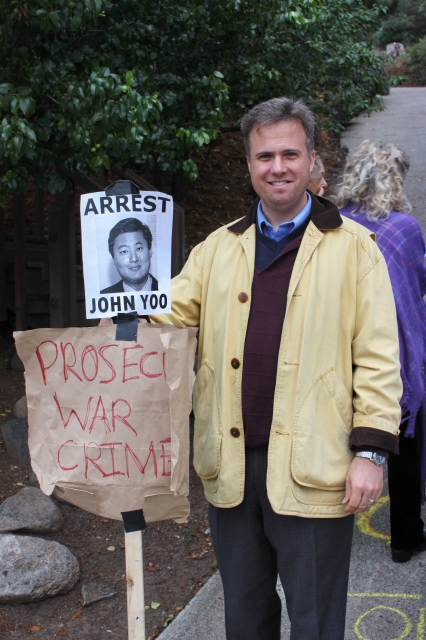 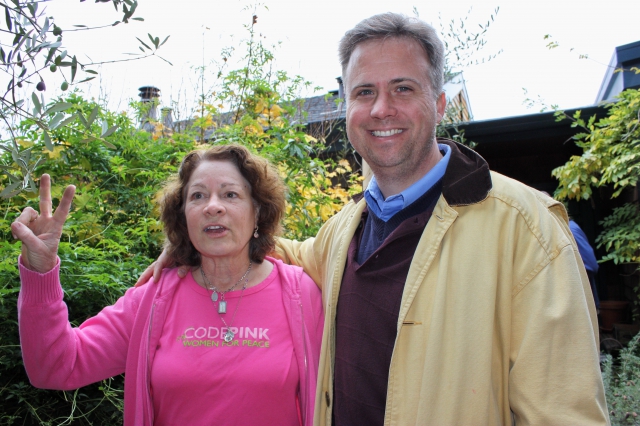 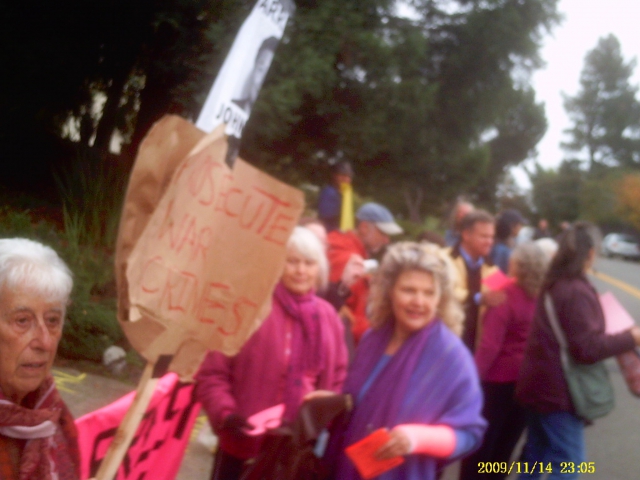