Add an Event
Newswire
Calendar
Features
Home
Donate
From the Open-Publishing Calendar
From the Open-Publishing Newswire
Indybay Feature
Publish to Newswire
Add an Event
Related Categories: Santa Cruz Indymedia | Media Activism & Independent Media
Hidden in Plain Sight: Media Workers for Social Change, Chapter 2
by Peter M (streetdemos [at] comcast.net)
Tuesday Dec 8th, 2009 8:56 PM
This is the second in a series of profiles of activist and alternative media workers in the Bay Area by Indybay contributor Peter M. Featured in this profile is Bradley, who works with Santa Cruz Indymedia. Bradley spoke about his life as a student, his work, and his connection to Mexico. In the photo below, Bradley stands with Redwood trees on the University of California Santa Cruz campus. 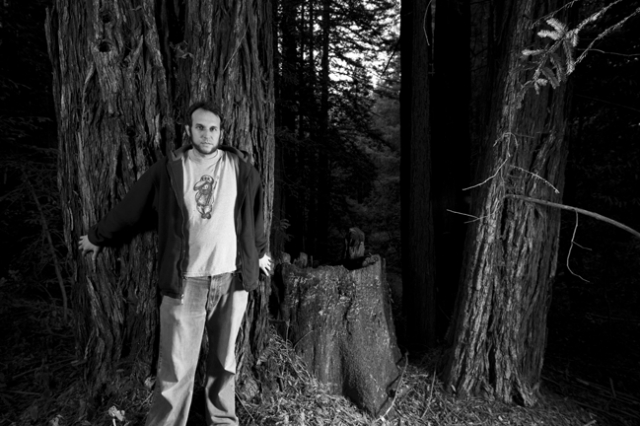 original image (649x432)
I met with Bradley in his modest Santa Cruz apartment, where he sat for an interview under a poster of Ricardo Flores Magón, an anarchist figure from the Mexican Revolution. Bradley has worked with the Santa Cruz Indymedia website since 2001, and has been one of the key people in its development. Santa Cruz Indymedia is a semi-autonomous element of Indybay, which is itself part of the worldwide network of collective-run Indymedia sites. The sites are evolving as focal points for movements against environmental degradation, capitalism, racism and patriarchy, and for non-hierarchical co-operation and social justice.

Bradley grew up in Oak Park, California, an outer suburb of Los Angeles. He attended community college at Moorpark and Santa Barbara, finally entering the University of California at Santa Cruz in 2000. Along the way, living with people who were studying photography at Brooks Institute, he picked up a digital camera, found it was fun to use, and got into photography. At UCSC, majoring in environmental studies, he studied how U.S. corn was flooding into the Mexican market. He was admitted into the Master’s program at UCSC in Social Documentation in 2006, and he received the degree in 2008.

In July of 2001, Bradley was visiting in Portland when he heard about the death of a protester against the G8 in Italy, Carlo Giulani, who had been killed by police during a demonstration. He went online, finding Indymedia for the first time. “I remember sitting down that night and just being blown away, looking at Indymedia and the coverage around the world,” he said. The next day he stopped into a local infoshop— an anarchist community center—and got hooked up with a march through Portland protesting Giulani’s murder.

When he returned to Santa Cruz, he found that a few people had put together a Santa Cruz Indymedia, and he started contributing and going to meetings, along the way learning about the technology. “I remember asking another Indymedia volunteer, ‘what is a jpeg?’ I really learned a lot through getting involved, about photography and html and websites.”

Software, Bradley said, is ideological. He explained that in open publishing, an innovation that Indymedia helped to popularize, people can contribute content using any style they want, rather than trying to penetrate the filters of traditional media. Decisions in Indymedia are made through a collective process, with the needs of the community in mind. Indymedia software is there for the community, and you can post your photos, audio and video without having to register or leave an IP address, making it safer for people to publish news and opinions without fear of repercussions. Facebook, he pointed out, has useful aspects, but the users don’t control the software. For example, he said, Facebook is a capitalist tool for advertising and mining personal data for marketing.

While Indybay is an all-volunteer organization, some Indymedia work involves professional-level skills. In Bradley’s case, while he is still a passionate protester, working for Indymedia has become a primary focus while he is at a demonstration. “I’m usually there taking photos and observing and thinking about Indymedia coverage, while telling other photographers to publish to Indybay. My role there is seen as ‘Indymedia guy,’ whereas someone else is carrying the banner; someone else is on the bullhorn; someone else is passing out flyers.”

On occasion, the UCSC police are heavy-handed with protesters. In November of 2007, Bradley published a story about a student tree-sit at UCSC to prevent development in forested areas of campus. It led off with a picture of himself, his face soaked in water and his eyes red from a police pepper spray attack. “I was taking photos,” he said, “some might say a little too close to the action, but that’s how you get them.” His Indybay story became an extensive series of close-ups of faces reddened by pepper spray.

“I only have reason to be angry is how I feel sometimes,” Bradley said. “I was born in 1979, Reagan became President in 1980, and I think a lot changed. There was a whole neoliberal shift. My parents see so much of the good of the United States, and the good of California—I just see so much of the bad. In the thirty years since I was born there have probably been around 30 prisons that opened in California, and one university. Numbers like that … I have so much anger. I just want to keep fighting for what’s right.”

Bradley was introduced to the story of the rebellion in Oaxaca, Mexico when he visited Austin, Texas for an Indymedia conference and met Simon Sedillo. Sedillo, as part of Austin Indymedia, was the lead filmmaker on a film called “El Enemigo Común,” which linked the Oaxacan struggle for self-defense with the anti-globalization movement. Sedillo encouraged Bradley to travel to Oaxaca and see what was going on for himself.

Bradley went to Oaxaca in 2005, and soon after he got there he witnessed high school students occupying a university building to protest their systematic exclusion from the public school. He then returned during August and September of 2006, when the town was in an insurrection, an experience that left him emboldened. “My whole experience in Oaxaca,” he said, “was inspirational. Not just inspirational, it is the knowledge and fuel that keeps me going. I think about what is happening in Oaxaca—the levels people go to to fight and resist the system. And they were so willing to talk, so surprised to see somebody like me there, a Gringo who was interested in what was going on and cared about it.”

In February of 2006, Bradley, along with Sedillo and others began a Oaxaca solidarity website along the lines of Indymedia called, like the film, “El Enemigo Común.” Said Bradley, “Simon has been a major influence on my philosophy, the way I go about Indymedia, and my approach to working with groups.”

For his Masters’ project, Bradley created a website for the Binational Front of Indigenous Organizations, a group that involves Native peoples on both sides of the U.S.-Mexican border. “For my project it was important for me to do something that was more necessary for the organization than another photo documentary series,” he said. The artists and activists working with the Front now use the site to put across their own work. “I see it as something similar to the Mesoamerican principles of 'teaching by learning' and 'walking by asking,'” he said.

As we talked, Indymedia was coming up on its tenth anniversary. There have been some successes and some failures (many sites have ceased operating). Bradley sounded pessimistic about the future of Indybay, because it is difficult to attract new volunteers. “One thing that makes it even harder,” he said, “is the fact that there’s so many social networks and blogs—people have the ability to make their own website, and to make it exactly how they want it; they can make something that’s sort of like Indymedia for themselves. I prefer Indymedia. What keeps Indymedia special is that it’s a movement, a movement of people with shared principals of unity, and it would be really hard to recreate. It’s got a place because it’s a network that has a reputation of ten years of working for social justice.”

http://www.bradleystuart.net
http://www.elenemigocomun.net
http://www.streetdemos.net
Add Your Comments
LATEST COMMENTS ABOUT THIS ARTICLE
Listed below are the latest comments about this post.
These comments are submitted anonymously by website visitors.