Visions of a Peruvian Shaman 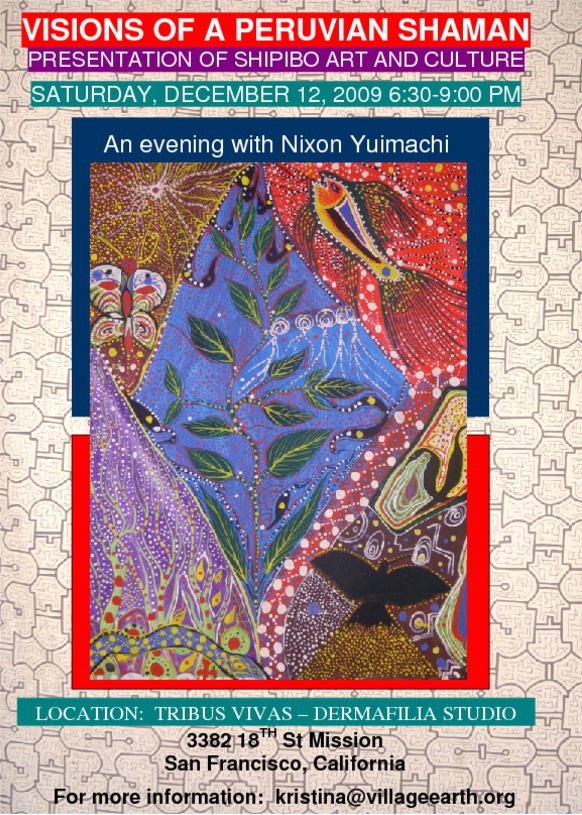 San Francisco, CA: The Amazon basin in Peru is quickly being sold off to oil companies, industrial-scale agricultural production, and loggers. “I have been looking for a way that we indigenous peoples can protect our lands,” said Shipibo artist Nixon Yuimachi from the native community of San Francisco in the central Peruvian Amazon. Nixon has been selling his art in the United States to raise money for his jungle preserve in the Peruvian Amazon.

With current concerns about global warming, international awareness is increasing that conservation and sustainability initiatives are extremely important in the Amazon since it is an area of global environmental importance for its roles in mitigating climate change. “Just now people in other parts of the world are starting to understand what we indigenous peoples have seen coming for many years with the destruction of the Amazon,” said Nixon.

Nixon and his family, with the support of their community, have set aside 22 acres of forested land to begin a conservation area called Yoina Baon Nii” (‘The Refuge of the Animals’ in the Shipibo language). There they hope to protect endangered Amazonian animal and plant species. They hope that this can generate income for the community through eco-tourism, but also protect their cultural heritage which is tied to their environment.

Through the sale of his art and crafts, Nixon is slowly raising the money for Yoina Baon Nii”. Nixon paints in a unique Shipibo painting style called Visioning Painting, which has a similar look to other indigenous styles of painting around the world with the use of colorful dots. He paints his ayahuasca (a psychotropic vine) visions that are full of Shipibo cultural symbolism and often tell important Shipibo histories and legends. He also paints Amazon landscapes that, too, are depictions of Shipibo stories passed down through the generations. When in the Amazon, Nixon uses natural paints and dyes that are found in different plants to make his paintings. As well, the other crafts he brings with him are all handmade and many use natural materials such as seeds, fish scales and bones. He hopes that by sharing his art around the world more people can learn about the Amazon, his culture and their stories.

Nixon is offering the San Francisco community an opportunity to be a part of this important effort through the exhibition and sale of his art and other crafts from the Peruvian Amazon. There will also be a short presentation about Shipibo culture and art, and environmental challenges and conservation in the Amazon. Saturday, December 12, 6:30-9:00pm. Proceeds from the sale of his arts and crafts will go to support his conservation efforts. The event will be held in the Tribus Vivas – Dermafilia Studio at 3382 18TH St Mission in San Francisco.

Contact: kristina [at] villageearth.org for more information
Added to the calendar on Wed, Dec 2, 2009 1:21PM
Add Your Comments
Support Independent Media
We are 100% volunteer and depend on your participation to sustain our efforts!