Add an Event
Newswire
Calendar
Features
Home
Donate
From the Open-Publishing Calendar
From the Open-Publishing Newswire
Indybay Feature
Publish to Newswire
Add an Event
Related Categories: Global Justice & Anti-Capitalism
Intoduction to The Apocalypse
by IEF
Wednesday Dec 2nd, 2009 9:38 AM
The Institute for Experimental Freedom's European appendages and friends are pleased to announce the completed layout for a new text in preparation for the Cop15 summit in Copenhagen, Denmark. Introduction to The Apocalypse gives a concise and critical analysis of the current ecological catastrophe, the climate change movement and its limitations, and the real existing potential for an immediate reversal of the future. Copy and distribute freely. 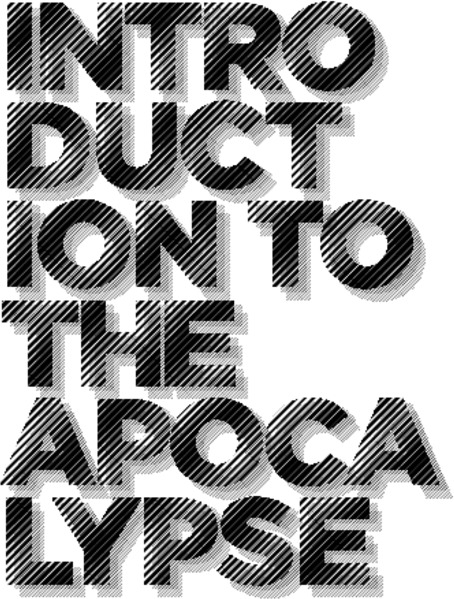 The Institute for Experimental Freedom's European appendages and friends are pleased to announce the completed layout for a new text in preparation for the Cop15 summit in Copenhagen, Denmark. Introduction to The Apocalypse gives a concise and critical analysis of the current ecological catastrophe, the climate change movement and its limitations, and the real existing potential for an immediate reversal of the future. Copy and distribute freely.

“All of us secretly desire for this world to end. The future lasts forever. Or at least, it used to. The grand illusion of Western civilisation has always been the myth of progress, namely that the flow of history would beneficently extend into an infinite future. To our parents, civilisation offered houses in the suburbs, computers, and automobiles. And civilisation delivered. To the children of these workers, civilisation offered life on the moon, artificial intelligence, endless peace. All of which have failed to emerge. While our parents cling to the belief that someday the mortgage will be repaid and they can retire in happiness, their lost children know this is a lie. This world offers nothing to us: no meaningful work, no rest, no future – only fear. Over and over again, we find ourselves conditioned like rats by the images of not just our own death, but of total destruction. From the collapse of the World Trade Centre to the alien invasion, from the spectre of nuclear war to the hole in the ozone layer – and now the melting glaciers – these images ingrain themselves in our very being. These images are nothing more than modern projections of the deep-set fantasy of all religions: the apocalypse.

Today, catastrophic climate change is the image of the apocalypse. Nothing has escaped the touch of humanity, from the deepest oceans to the atmosphere itself. There is little doubt that carbon emissions caused by human activity may bring about the end of the world as we know it. It’s just a matter of listening to the ticking of the doomsday clock as it counts down to a climactic apocalypse. Never before in recorded history has the question of the earth’s survival been so starkly posed, and never before has such news been greeted with such indifference.

What is to be done in the face of a crisis so large it dwarfs the imagination? We are left with nothing but a sense of impending doom, a strange depression that keeps us oscillating between hysterical hedonism and sad loneliness, and in the end both responses are merely the two faces of the selfsame despair. Those self-appointed to “save” us from this crisis – the governments, scientists, activists –seem incapable of anything but sloganeering: clean development, carbon markets, sustainable development, climate justice, ecological reparations, green capitalism. We know in our heart of hearts that these fantasies give any sensible person as much cold comfort as a stiff drink. Confronted with the real possibility of the apocalypse, the world becomes inverted: to continue as if everything is normal in the present moment is the most refined act of nihilism.

This generalised delirium, formerly confined to only a handful of activists, has spread over the last few years to the population at large, and even the state seems a sincere believer in catastrophic climate change. Observe the reaction of the nation-states who, while in endless summits to “solve” the climate crisis, such as the COP15, continue to build airport after airport, highway after highway, giving industries the remit to emit ever-more carbon. The nation-states continue to act as if everything is normal, while at the same time lying through their gritted teeth that “we are solving the climate crisis.” No-one today, even the children, believe them. Their summits and pledges are mere fiddling while Rome burns. The absurd plots hatched by scientists to avert this coming apocalypse, from putting mirrors into space to pumping water from the bottom of the ocean, have only the virtue of being at least mildly entertaining. There is a distinct air of madness about our rulers, a madness that reminds us only too much of the monarchs of the ancien regime shortly before their beheading. Yet, what can a single person do? The despair felt when confronted by the reality of climate change is an honest appraisal of a disaster where there is no easy escape. Let us hold this despair close, let it nurture us. Honesty is always the best policy for survival.” 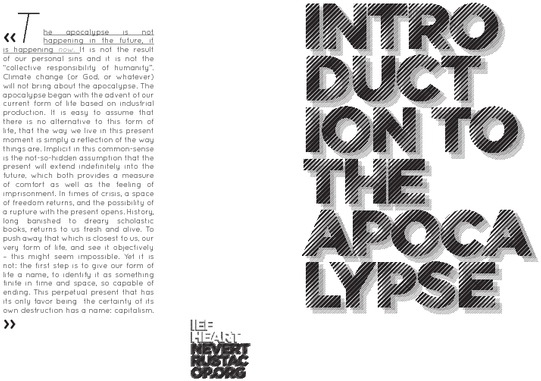 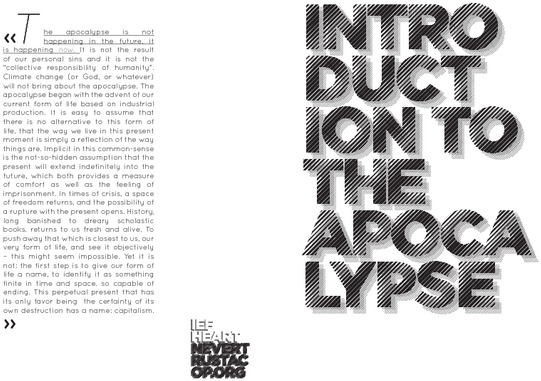 Download PDF (439.5KB)
Add Your Comments
Support Independent Media
We are 100% volunteer and depend on your participation to sustain our efforts!