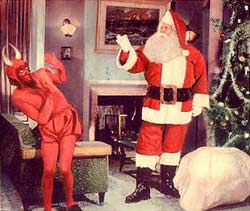 Oh, so you thought that "Santa Claus Conquers the Martians" (which plays on Dec 20) was fine holiday fare, eh? Great cinema? Well we can top that! Oh yes we can! Want to destroy any vestige of good feelings left over from the holidays? Want to get rid of that cloying theme song from "Santa Claus Conquers the Martians" and replace it with something even worse? Well MOBS is here to help! You might want to double up on "holiday cheer" before arriving though...

More than a few people have asked if we'd bring this back - so let's see if you have the guts to withstand it again... and so, without further ado - by popular demand -- the return of ... (drum roll)

We're ashamed (yet strangely giddy) to present the return of this bizarre and relatively unknown movie from 1959, originally filmed and released in Mexico. Included will be the badly and bizarrely dubbed English soundtrack (no subtitles) from its 1960 US release.

The plot is fairly straight-forward - Santa lives on a cloud floating over the North Pole where, rather than elves, children from all over the world help make toys (and they're really more like happy slaves). Is this a happy Santa that you'll hope will come down your chimney? Um, not so much. He's pretty creepy with his overly sweet voice paired with his disturbing (and not quite jolly) laugh and insincere and sometimes vacant eyes staring at children through odd Sid and Marty Krofft-like devices - well, it's best just left at that... But anyway - Satan is determined to bring Santa down, so sends his minion, Pitch (a skinny guy in a cheap weird red suit), to the surface to make the kids of the world hate Santa and engage in vandalism and other mischief. Oh yes - and Santa is pals with Merlin the Magician who supplies St. Nick with, amongst other things, sleeping powder. Oh - did we mention the vampiric mechanized reindeer? No? Or the interpretive dance in Hell? Hmm...

All in all, this is one surreal (and yes, it IS surreal) cheaply made (and yes, it IS very low-budget, so don't expect quality) Christmas travesty for all to enjoy, even with its boring parts (and yes, it DOES have it's boring parts). When this was first released in theaters, it was common to see children leaving in tears from trauma and fright.

You know, it's not really a Christmas movie without dialog like, "There's a prowler out there -- he's come to kill your wife. And your children. He's going to murder you!"

"How can a movie get everything so very, very wrong and yet be so very, very right? If you aren't the least bit familiar with this surreal trip into an extremely non-traditional view of jolly ol' St. Nick, perhaps the less known the better, as half the fun of this colossal mess is staring in dumbfounded awe at what is transpiring on the screen. It's a hoot. A damned scary hoot, granted, but certainly a hoot." - dvdinmypants.com

END_OF_DOCUMENT_TOKEN_TO_BE_REPLACED
Added to the calendar on Tue, Dec 1, 2009 2:21PM
Add Your Comments
Support Independent Media
We are 100% volunteer and depend on your participation to sustain our efforts!