The End of Poverty? in theatres 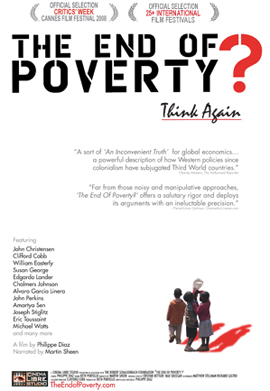 Sold out shows during its opening weekend in NYC, beating out at the box office every film playing at City Cinemas Village East including Disney’s ‘A Christmas Carol’ starring Jim Carrey!

Narrated by Martin Sheen, The End of Poverty? is a daring, thought-provoking and very timely documentary by award-winning filmmaker, Philippe Diaz, revealing that poverty is not an accident. It began with military conquest, slavery and colonization that resulted in forced labor and the seizure of land and minerals. Today, global poverty has reached new levels because of unfair debt, trade and tax policies -- in other words, wealthy countries exploiting the weaknesses of poor, developing countries.

The End of Poverty? asks why today 20% of the planet's population uses 80% of its resources and consumes 30% more than the planet can regenerate? Can we really end poverty within our current economic system? Think again.

END_OF_DOCUMENT_TOKEN_TO_BE_REPLACED
Added to the calendar on Tue, Dec 1, 2009 11:55AM
Add Your Comments
Support Independent Media
We are 100% volunteer and depend on your participation to sustain our efforts!