Add an Event
Newswire
Calendar
Features
Home
Donate
From the Open-Publishing Calendar
From the Open-Publishing Newswire
Indybay Feature
Publish to Newswire
Add an Event
Related Categories: California | Santa Cruz Indymedia | Education & Student Activism | Police State & Prisons
bringing the crisis to the capital of capital in santa cruz
by * * *
Tuesday Nov 24th, 2009 12:51 PM
on the end of the kerr hall occupation: from the occupants and the admin 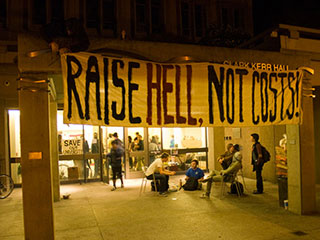 EVERY TIME a building has been occupied at UCSC, the administration has responded by moaning publicly (and into every @ucsc.edu mailbox) about the monetary costs of alleged damages, as if by beating this drum to insist we focus only on what is important to them – property – rather than the present and future of our lives or any other issues that are at stake here. We’ll admit it, we felt a cruel pleasure as the cables screamed and cried when they were parted from the conference room tables; the tables begged for mercy as we broke their legs, jumping up and down on them with malicious glee; and we could only chortle as the filing cabinets complained loudly that we had not had a 4-hour long democratic process before strapping them across doorways. We imagine that the same bureaucrats who normally use the building, and who piously denounce our acts of collective negation must feel a similar thrill as they ransack our futures.

Seriously, they should be glad we didn't burn the fucker down.

For around 60 hours we seized control of the driver’s seat of UCSC, the main economic power and site of social reproduction in the local metropole. In the aftermath, heading towards another seven-day unit of capitalist commodity-time, we feel the deadening of our existence especially sharply in contrast to the fullness of hours spent behind barricades, fighting for our claim to our own destinies. It’s clear that the momentum we are part of has grown by leaps and bounds and as the crisis ramifies, we are forming new bonds and new complicities. Young people confronting an absent future are finding each other, recognizing ourselves in others as far away as Greece and Vienna, as near as the streets of LA. We are getting a taste of the power we want and it feels amazing.

There are a number of aspects of the Kerr Hall event that we as participants would like to illuminate.

AN OCCUPATION IS A VORTEX, NOT A PROTEST. People will go on and on about their ideologies and what "we should do", but consciousness is determined by one’s experiences, one’s material conditions. Most people have never experienced much besides the life of a docile subject within capital, endless spectacular reiterations of commodification. It was rarely talking that changed anything, but rather the moments we gave in to the seduction of the vortex of collective power and desubjectivization – the vortex which leads towards anarchy and communization. Politics as such can only be a barricade against this process. A number of things have happened in the past few days which would have been almost too ridiculous to expect, almost right up til the moment they happened (see below), and a number of individuals underwent transformations in terms of their consciousness, their orientation to struggle and their relations to others. The most potent moments were those of collective illegality and subversion, the becoming-powerful of a we that defies precise naming.

First, the storming of Kerr Hall on Thursday. The taking of administration buildings had been raised before and dismissed as pie-in-the-sky unrealistic. It was, for the small groups of people who planned and carried out the GSC and Humanities occupations. But those bold actions got the ball rolling in a way that began to have clear ramifications by the Science Library soft occupation and by the actions being carried out by comrades on campuses elsewhere. The storming of Kerr became possible because of the occupation of Kresge Town Hall in order to hold a general assembly – organizers had been charged $400 to hold one there previously. The logic of occupation became very clear to people in the sense that the school wanted to rip us off over having a place to talk about the fact that they’re ripping us off. And it turned out that most of the people in that room were down to occupy an administration building, immediately, so in a great raw burst of species-being, we did.

Second, that on Saturday night the occupation democratically decided to escalate the barricade tactic in response to the deceptive, manipulative, bad faith farce that the administration tried to pass off as a negotiation process. This came after a day in which the pacifist-liberal faction had been threatening to dominate utterly, through rambling, circular meetings about how “barricades will prevent the administration from negotiating with us” (even when the agenda item was the upcoming negotiation meetings), "barricades mean every single person will eventually have the shit kicked out of them and get felony charges" and so on; it came at the end of a long, bitter, stressful, and contentious evening meeting of about 150 occupiers falling in a spectrum ranging from almost evenly-matched liberal to radical camps, that most of us on the “ultra-left” had gone into expecting that the majority would want to either remove the barricades entirely, or send us off to barricade another floor. When the decision was (narrowly) made to make the space as tactically secure as possible, we were all a bit shocked: the democratic faction dissolved itself out of the occupation via its very insistence on democracy. (Reminds one a bit of the line about capitalists selling you the rope to hang them with.) There was an immediate and intense change of energy, much like the surge we’d felt on Thursday (or on Friday when the door to the Chancellor’s wing was taken down). All of a sudden, we were bumping Justice, we were dancing on tables, we were pulling on masks, pushing the heaviest pieces of furniture we could find to new homes chanting “This means war!” People who minutes earlier had been telling us that building more barricades was a violent and foolhardy act and they would leave if we did so suddenly felt that surge of collective power and realized they wanted it, and they stayed. And some of them started helping us move tables and thanked us for sticking to our guns.

Third, that at 6am there were around a hundred people outside the building who faced off with a huge force of riot police armed with chemical weapons, and stood their ground with linked arms. It was incredibly moving to see our friends and people we didn’t know on the other side of a plate glass window being steadily driven back underneath a hail of baton blows they were taking for our sake. There were faculty, parents and staff in the crowd as well (a professor was hospitalized).

Fourth, what happened when the fire department ripped off the doors and cut the barricades. The cops asked us to come outside to be arrested one at a time and we refused. They then offered us a written guarantee that if we left the building voluntarily through a side door within ten minutes, we wouldn’t be IDed, detained, or arrested. Instantly all the anti-barricade arguments were shown to have been completely meritless. We all realized more or less instantaneously that we had won as much as we were going to win and that there was no point in symbolic, sacrificial arrests. Again: the cops asked us to walk outside and let them arrest us, and when we said "no," they just fucking let us go. This is in many ways a testament to the fact that the occupation enjoyed widespread support from faculty, staff, unions, students, community members and even some of the administrators. It completely blew our minds. We had all been sure that we were going to jail, and all of a sudden we were outside with our friends and allies, everyone hugging, crying and cheering, stunned, chanting “We’ll be back!” as we marched off to Kresge.

Fifth, another aspiration articulated earlier and dismissed as a pipe dream – the obtaining a permanent organizing space – has also been realized. The occupation of Kresge Town Hall nearly collapsed as the focus of energy moved to Kerr, but the Kresge provost is so supportive of the movement that he has offered to waive all fees for use of the space for General Assemblies or related activities.
http://likelostchildren.blogspot.com/2009/...
Add Your Comments

And, while you find irony in the what you claim is the consistent complaint from the University that you've vandalized property, I find equal irony in your repatitive complaints of innocence and police brutality.

With every protest that has occurred at UCSC, you've sung the same song. Doesn't matter if its Alette at Regents O6, Treesitters in 08, Glasscock and friends in 09, the song remains the same:

"We were innocent bystanders, not even involved, and the mean police just went maverick and assaulted us for no reason with no warning."

I find you're protestations of innocence and abuse unbelievable.

Add a Comment
§who said we were innocent?
by fuck off you liberal tool
Saturday Nov 28th, 2009 1:25 PM
effective resistance will always, always, always be criminalized.
making your precious legality just a sham of morally justifying utter complacence.
Add a Comment
§The ones who get busted
by claim innocence
Sunday Nov 29th, 2009 7:05 AM
That's exactly what I just said. In the recent history of protest at UC, every protester busted has loudly proclaimed innocence and setup, in the face of overwhelmingly opposite evidence.

Does being an anarchist mean you can't read liberal toolese?
Add a Comment
Support Independent Media
We are 100% volunteer and depend on your participation to sustain our efforts!