by Aaron & Katharina
SEIU Workers, families, and public sector allies continue to fight to save jobs and services in SF, call out Mayor’s budget cuts as racist, sexist, and an attack on all workers and communities. 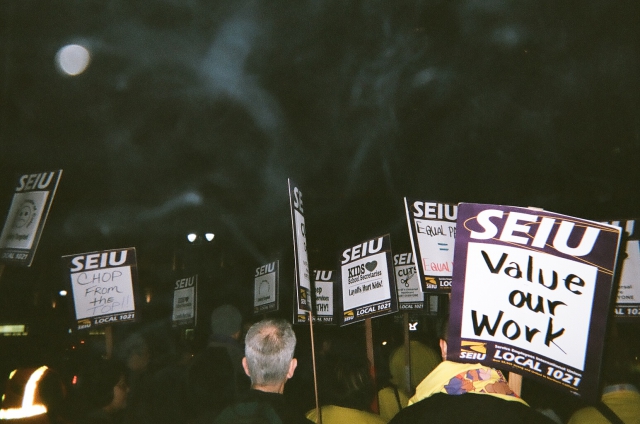 original image (1545x1024)
Workers continue to fight to save jobs and services in SF, call out Mayor’s budget cuts as racist, sexist, and an attack on all workers and communities.
Monday Nov. 23 2009

In their invitation to this evening’s raucous event SEIU 1021 organizers stated, “We feel the Mayor’s unprecedented move requires an unprecedented response. Last week we took over the Mayors’ office, on Monday, Nov. 23, 2009 we take it to the next level!”

Answering the call, protesters converged on City Hall this evening to rally followed by direct action for “justice and fairness, to fight employment discrimination against City workers, to save City Services and to save those who are about to lose their job Thanksgiving Weekend.”

Specifically at issue this evening was the fight to hold on to $7 million won back from previous cuts as a supplemental budget appropriation which would prevent 500 layoffs of CNA’s (Certified Nursing Assistants), Clerical Workers, and frontline health department workers. According to Tim Redmond from the SF Guardian, Mayor Newsom, City Budget Controller Ben Rosenfeld and their allies at City Hall “are going out of their way to force layoffs, bumping and job displacement,” and reverse even this small victory, following two rounds of the most brutal budget cuts to poor and working people ever seen. He calls it “a move that’s unprecedented in modern San Francisco history.” (SFBG Nov 18 2009). If Supervisor Dufty remains on the side of progressives long enough for this vote and Supervisor Maxwell grows a heart, those votes should be enough to keep this small victory, but the larger class war continues.

The rally was attended by over 300 people, mostly SEIU workers and their families, some allies working for community based non-profit social service agencies (also under attack) some students and workers from SF Unified School District, and others coming from the recent strikes and occupations at UC Berkeley and SF State, standing in solidarity with all public sector workers against budget cuts and promoting the March 4th General Strike/ Day of Action across all California education and hopefully the public sector called for at the statewide conference at UC Berkeley last month.

Following a round of speeches from labor leaders in SEIU the crowd took to the streets chanting “They say Cut Back, We Say Fight Back!” “Chop From the Top!” “Who’s got the Power? We Got the Power! What Kind of Power? Union Power!” et al. We marched downtown where we took the intersection with our picket signs at Market and Hayes for over an hour, blocking off the street corners with caution tape, while 15-20 people locked arms in the middle of the crowd in an act of civil disobedience, bearing signs that read “Save Jobs and Services in SF,” a message we can all relate to as the government continues to force the impact of the “budget crisis” onto the backs of working class people and communities.

An attack on the working class:
An SEIU spokesperson said, “The City has chosen to lay off 83% frontline workers over the last three years, while the frontline workers are only 50% of the workers. This while there has been a 50% growth in management during the Newsom administration according to a controller’s report last year.”
City management positions have gone from being around 700 positions 6 years ago to almost 1200 positions today.
“[W]hile they are telling people at the bottom […] that they should take more wage cuts, literally up to a 25% wage cut, and they are telling others, that they should not have a job at all, they have not laid off Management, and have in fact, consistently raised their wages in huge numbers.”

An Attack Across Race and Gender:
These budget cuts are not only attacking us as members of the working class, however, they are aggravating what you might call pre-existing conditions in social injustice—institutional racism and sexism.

As SEIU 1021 points out: “For those who look at […]the categories of race and gender, the impact is obvious. [….] The recent round of layoffs are all frontline workers in health care, [and] 79% women and 96% minorities. Meanwhile, there are no layoffs of management. [….] These layoffs have a disproportionate impact and result in employment discrimination for women and people of color.”

Community Justice Angle:
How do these layoffs and service cuts affect the rest of SF? Most of these jobs we're talking about saving are providing vital services to SF's poor and working class, while no bosses are taking losses, and no corporations are being taxed.
For example, all of these proposed layoffs in the Department of Public Health will undermine Healthy San Francisco providers' ability to give quality health care to low income San Franciscans. Another 25% cut to Public Health and Human Services is expected to drop in time for Christmas this year, so now would be an excellent time to prepare for the kinds of resistance we have not seen since the 70’s.

Solutions:
According to SEIU 1021, “The Board should tell the Mayor’s office to go back to the drawing board and tell the Mayor to come back with a new plan for lay-offs. One that is fair and proportionate.”

According to one recently deskilled CNA at Laguna Honda hospital, “Mayor Newsom could decide any time, right now, to ask the board to vote for the supplemental appropriation and to rescind the layoffs and bumping. Evidently the city charter makes him the ultimate decider.”

Tim Redmond frames it thusly:
“The thing is, the city's budget crisis never really goes away. It's a structural imbalance; save for the occasional boom years, San Francisco simply doesn't bring in enough revenue to cover the costs of services people in this city want and need. It's much worse in a recession, of course, but it's always bad. And it's going to remain an annual problem until the folks at City Hall make some major structural changes [….] There are highly paid management-level people all over this city who don't do nearly as much work in a week as a typical nurse's aide does every day. [….] None of those folks ever get laid off.”

Sooner or later we are going to have to get real. We are under serious attack, so we can be honest. The attack is not new. Deskilling and cuts to social spending are a result of what we in the antiglobalization movement know as "structural adjustment," the process by which governments shed their public service spending and democratic responsibilities to the public and rescind the old social contract in order to appease the rich, the business class, and the logic of capitalism, which prioritizes profit over people. This policy kills, it does not ask permission or explain itself and it operates on a logic that does not take humanity into consideration.

These cuts and layoffs are an outcome of untreated "pre-existing conditions" of social justice if you will: racism and patriarchy plus capitalism (the policy of profit over people, the domination of the priorities of government by the business class, blahdy blah blah.) an ongoing syndemic illness which budget cuts are exacerbating, and a good illustration of the intersections between economic justice, social justice, and budget justice.
The entire safety net we are losing today was won by ordinary people like us in the 1930's during the crisis of the last great depression when they decided they'd had enough and organized to shake this system by the roots. What would they say to these "budget cuts?"

Everywhere, people are asking, what about making the rich pay their fair share? What are we prepared to do if they don't? Do we really want another New Deal or should we fight for the whole damn thing this time around? The legitimacy of the ruling class in society is based on the consent of the governed, and measured by the welfare of the public.
These intersecting issues of social justice and economic justice connected to these budget
cuts, impacting all public sectors of working people and hitting already oppressed communities hardest, added to an organized labor force with a critical mass of organized workers within the public sector that could shut this city down overnight if it wanted to, gives us the strategic structural leverage, good faith, broad support, and just cause necessary to win this war on the working class.

Students, faculty and staff fighting for budget justice in education are already calling for a General Strike in education for March 4th and Public Sector solidarity. I can’t wait to see what 1021 does next. Public sector strike? Republic windows and doors-style takeover of a hospital? More City Hall occupations?

An injury to one is an injury to all, and we are ALL under attack! So what do we do? Stand up! Fight Back! If there's nothing left to lose, then lets get ready to win a world worth fighting for! See you in the streets! 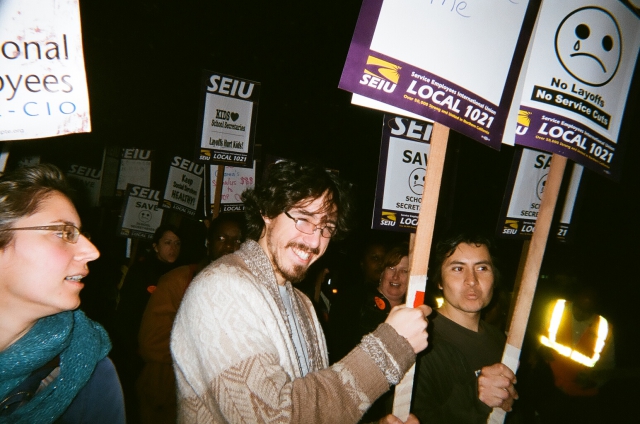 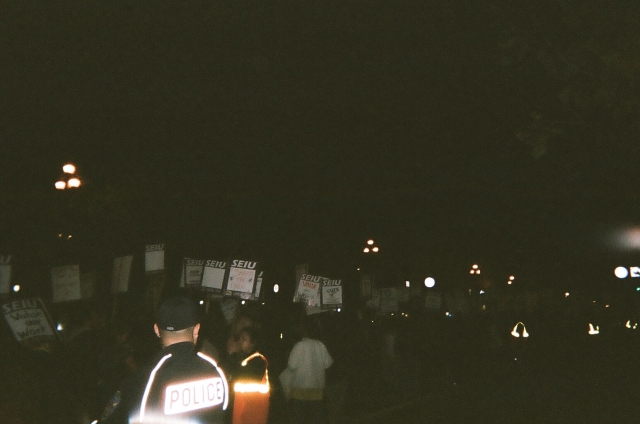 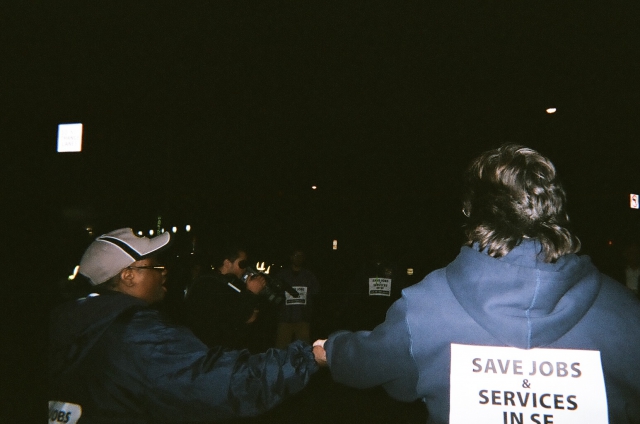 original image (1545x1024)
these SEIU 1021 workers and allies took direct action and were arrested, surrounded by 300 fellow workers demanding budget justice, blockading the intersection of Market and Hayes St for over an hour.
§
by Aaron & Katharina 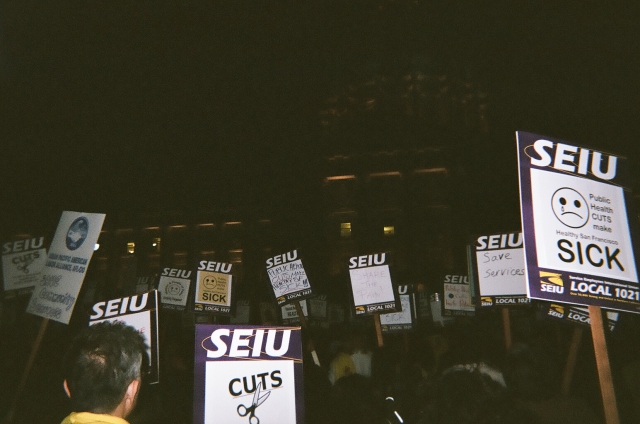 original image (1545x1024)
converging on City Hall. Who's city? OUR CITY!
Add Your Comments
Support Independent Media
We are 100% volunteer and depend on your participation to sustain our efforts!