Listen now:
Copy the code below to embed this audio into a web page:
Download Audio (3.4MB) | Embed Audio
The students who are now occupying the Fresno State University library held a press conference at 10 p.m. this evening. The press conference was held on the main floor of the library, where 75 - 100 students are saying they will not leave. The administration has locked the doors allowing people to leave, but not return. There are about 50 people standing outside in the rain, chanting and holding signs in solidarity with the students.

The photos below show the scene just before the press conference was held, as the occupying students inside were at the front doors (which are glass). Chanting was going back and forth between those occupying the library and their supporters outside. 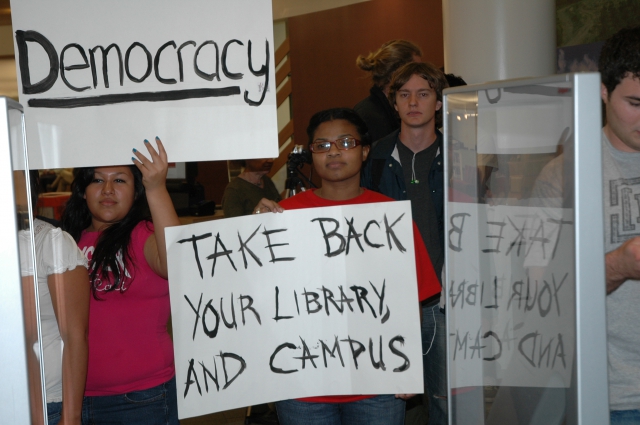 original image (3008x2000)
These Students are Standing at the Front Door, inside the Library 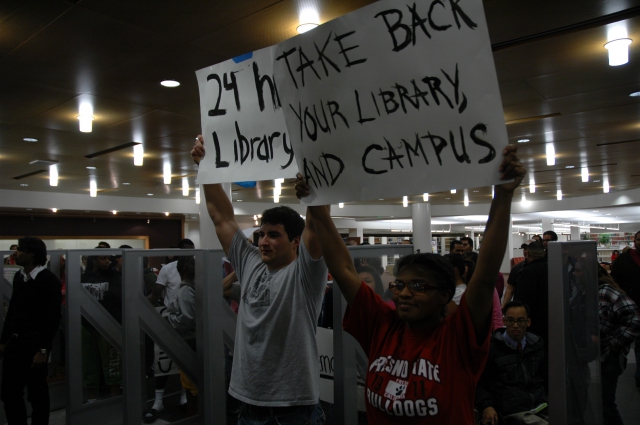 original image (3008x2000)
Students were chanting back and forth with the students and supporters outside the library. 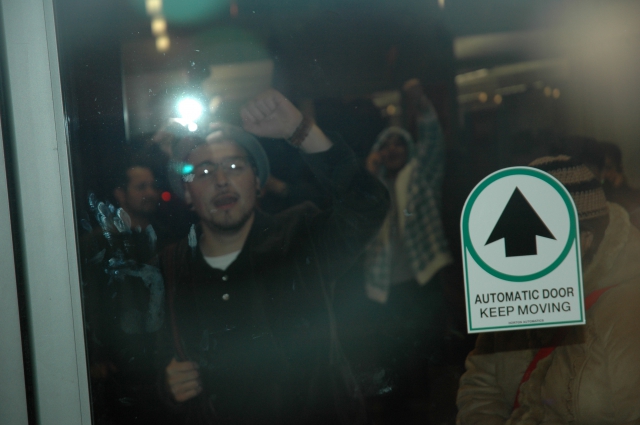 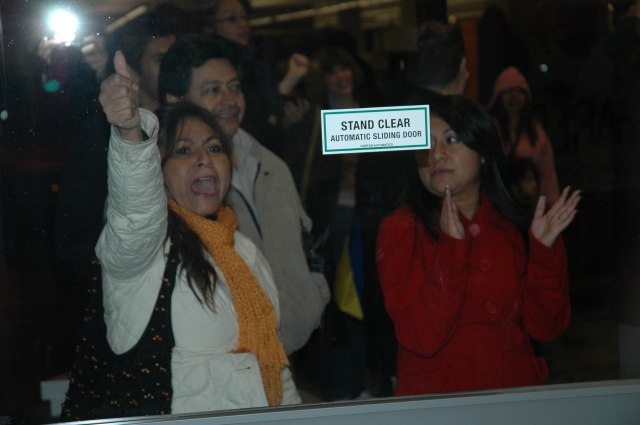 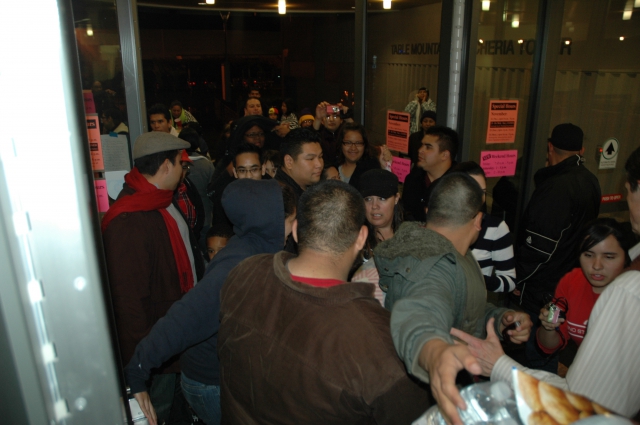 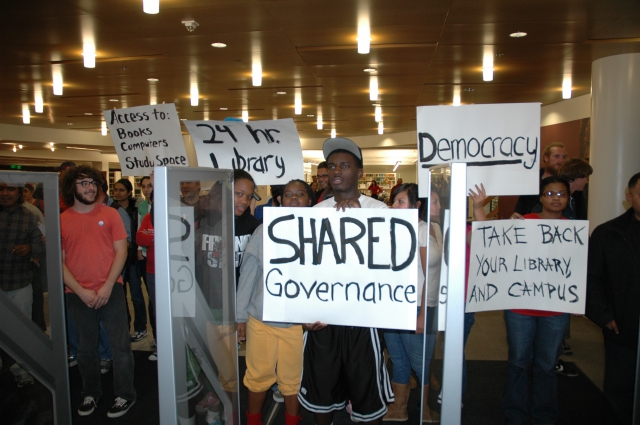 WHY: Inadequate library hours and lack of shared governance

Students will be leaving the FSU library at 7:30am after an overnight study in.

Media is encouraged to be there at the library entrance for interviews and exit footage.

The Henry Madden Library is the largest library in the entire California State University System. Eleven of all CSU campus libraries are open 7 days a week (San Marcos, Sonoma, Pomona, East Bay, Sacramento, Northridge, Chico, Stanislaus, San Bernardino, San Luis Obispo, San Francisco, and San Diego) and some are open 24 hours a day. However, since Fresno State’s library inauguration in February, it has been operating on restricted hours.

On Wednesday November 18th, 2009 an abrupt announcement was made by the Dean of the Library, Peter McDonald to create a new policy that would open the library for a mere 4 hours on Saturdays. We are led to believe that this spontaneous decision was due to the one-time federal stimulus money received October 2009. However, it appears as though the real reason this decision was made was as a reaction to recent students’ promotion of a study-in at the library.

The study-in will begin at 4:30pm Friday, November 20th and the students will hold a press conference at 10:00 pm on the 2nd floor of the library. It is a peaceful event in response to our concerns to restricted access to our most vital academic resource that is a necessary element to ensure academic success at Fresno State. The study-in is not reactionary, but is merely part of a much wider local and statewide campaign to bring about a more Democratic system at our California Universities. Following along with our broad goals of Transparency, Advocacy, Shared Sacrifice, and Shared Governance, this action and the situation that mobilized this action revolves around the lack of shared governance. If students could actively participate in the decision-making process, then our library would be more accessible, and non-academic services deemed non-essential could be eliminated. Students need active participation in decision-making when the decisions directly affect them, as does the decision of library accessibility.

Add a Comment
§Thank you to the community and families
by student
Saturday Nov 21st, 2009 9:17 AM
I think the most amazing thing that I saw at this study-in was how much community support the students received. With the 70 students and faculty we had almost 30 community leaders and concerned members inside with us. On the outside there were another 30 community members including many family members. The families kept bringing us pizza, drinks, snacks--once the staff stop letting them bring food in, a giant pile of food formed near the door. This was not a bunch of students being unreasonable, this was a bunch of students being completely reasonable and having full support from family and community.
4 of the family members actually spent the night out on the cold, damp concrete--that's more dedication than those of us who risked arrest. I firmly believe also that if the families and community were not there in support we likely would have had to deal with police. Instead we had no problem from campus police and managed to stay from 5pm, when they closed, to 7:45am, 24 hours since they had opened.
Education is the key building block of our communities. This "crisis" in higher education is a crisis for the entire community. Our little brothers and sisters who dream of going to college someday will not be able to if admissions continue to be reduced and tuition continues to increase. The community realizes how messed up the states priorities are, California spends more on prisons than education, this is ridiculous. If we educate people rather than jailing them we will see a vast improvement to the quality of life in general and especially in the communities. This is everyone's fight and last night everyone was out there fighting it!

Si Se Puede!
Add a Comment
§A very proud Alumni
by ann
Sunday Nov 22nd, 2009 7:22 PM
Thank you to the Students, workers, and community member who are fighting for their rights.

We know you are in one of the most conservative and hostile areas.. and you are extremely courages.

Thank you for filming and posting the audio and pictures. Please keep the pressure on. and remember to also vote, and work on campaigns of progressives.

There are people all over the nation who know that Fresno State Students also took over the library and held their ground.
Add a Comment
§Just say no to student "leaders"
by theymaylikeyounow
Monday Nov 23rd, 2009 9:44 AM

Student "leaders" may like you now, since you are currently willing to give them your power and allow them to speak for you, but as soon as you develop your own autonomy, they'll turn against you and become student police. These resume-builders will tear apart your occupation; at UCLA, they even went so far as to desecrate the legacy of slain Black Panthers Bunchy Carter and John Huggins by tearing down the Carter-Huggins Hall sign, and they also broke locks from the inside and negotiated a fake peace with the police to destroy the last hope of sustaining the movement there. Other self-appointed student police were caught on video at UCLA setting up a barrier line for the LAPD and UCPD! Their effect was to kill the other students' last chance at stopping the criminal fee increase, but even their stated goal was repugnant: they claimed they did it to censor immigrant students for their own good. Warning from the UCs: Anyone claiming to be a student "leader" should be kicked out of all liberated spaces and meetings immediately! Don't let them kill your movement, Fresno! Learn from our mistakes!

(Here's a thought: Maybe future horizontally-organized occupations can declare a "no leaders" rule up front so that anyone claiming to speak for anyone else will just be kicked out or ignored.)

Add a Comment
§student leaders
by CSUF student
Monday May 10th, 2010 3:58 PM
just to be certain, there are no student "leaders" organizing at Fresno State. Based on the statewide conference and the feel that we got from people all over the state (and the hierarchical format of the conference itself), Fresno is the most horizontally organized campus in the state.
Add a Comment
Support Independent Media
We are 100% volunteer and depend on your participation to sustain our efforts!