Add an Event
Newswire
Calendar
Features
Home
Donate
From the Open-Publishing Calendar
From the Open-Publishing Newswire
Indybay Feature
Publish to Newswire
Add an Event
Related Categories: Santa Cruz Indymedia | Education & Student Activism
UCSC students shut down campus and occupy building.
by Solo Educado (brownberets [at] msn.com)
Wednesday Nov 18th, 2009 11:58 PM
Students and allies shut down University of California Santa Cruz and occupy Kresge Town Hall.
Listen now:
Copy the code below to embed this audio into a web page:
Download Audio (12.6MB) | Embed Audio
On November 18, 2009 over 500 students marched through campus, temporarily shutting down entrances and classes for the day. The UC Regents meet tomorrow in LA to vote on a tuition increase of over 30% to UC students. The increase would be implemented next semester. All UC and CSU campuses held solidarity actions around the state. While UC students too action, protests at other campuses in different countries including Sweden, Australia and Germany occurred.

The gathering started at the Bay Tree bookstore, leading to a march to the base of campus where they shut down both entrances to the university for a large part of the day. Students proceeded to occupy Kresge Hall. They remain in the occupied building.

Students gave speeches and after discussing options of how to proceed they decided to take Kresge Hall. Police were present but at this time there are yet to be any arrests.

Assembly Bill 656 proposes to increase taxes on oil and natural gas to invest in higher education. This bill could alleviate the financial strain on public education. This bill is worth researching and supporting if oil companies are prohibited from passing the tax onto consumers at the gas pump.
http://www.brownberets.info
§
by Solo Educado Wednesday Nov 18th, 2009 11:58 PM 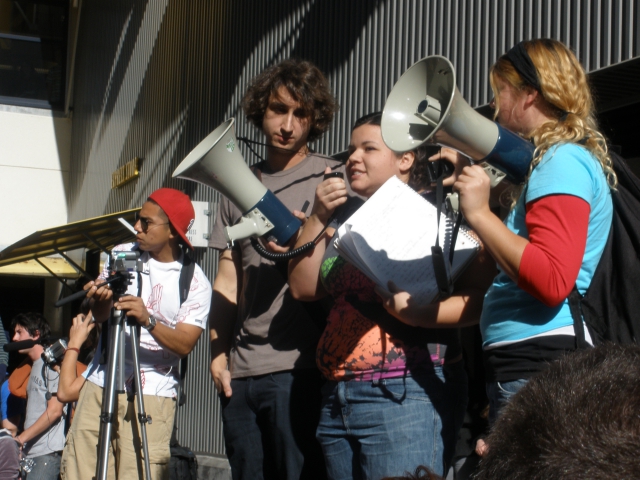 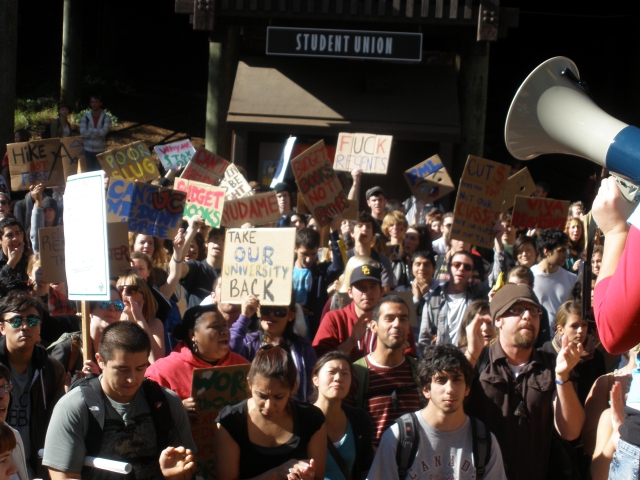 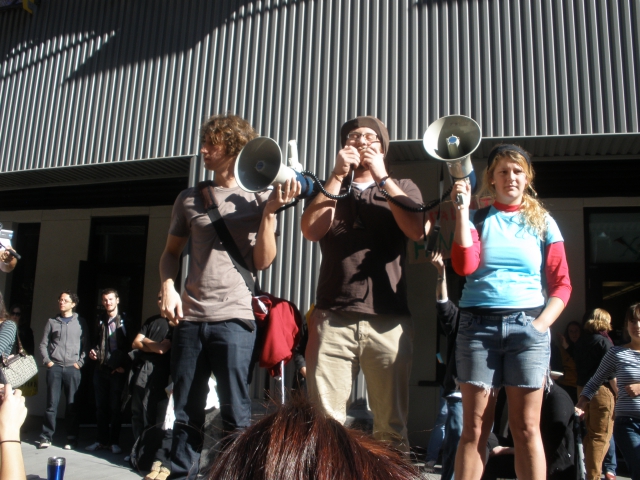 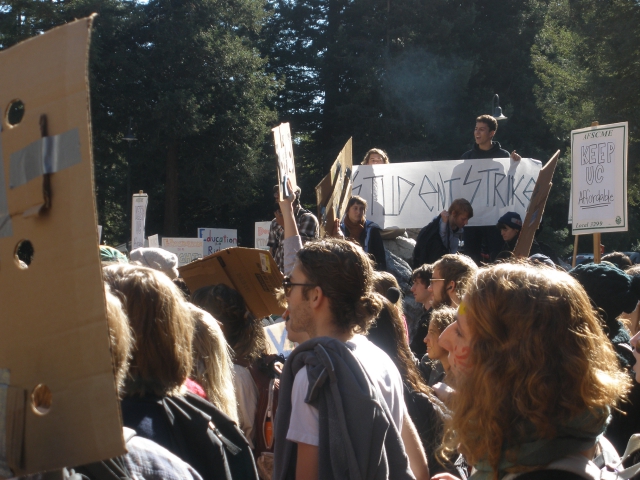 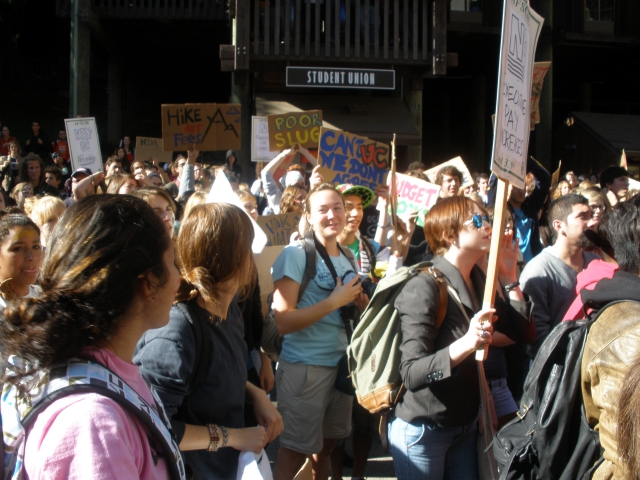 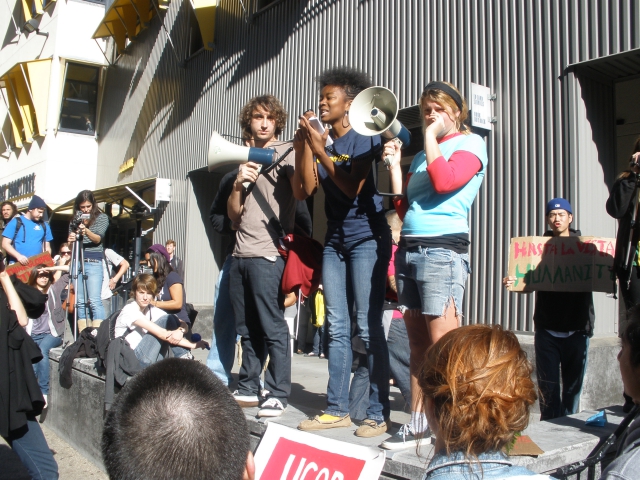 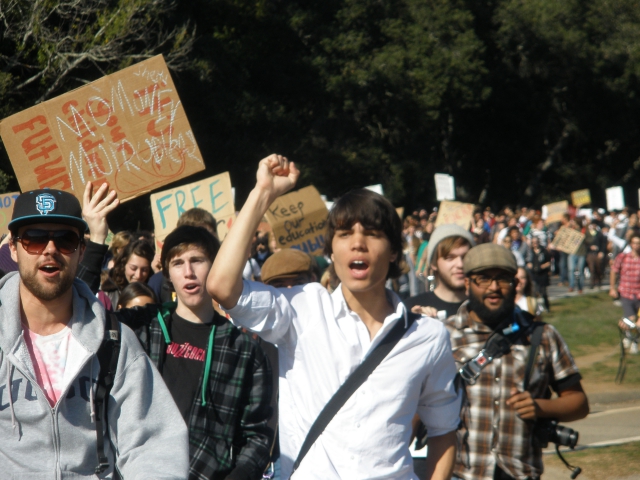 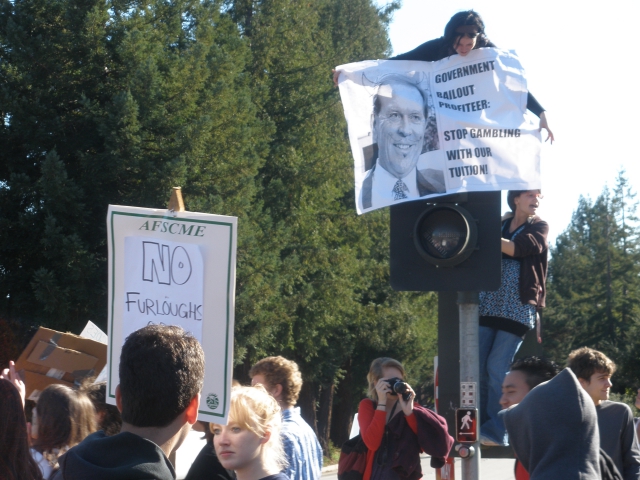 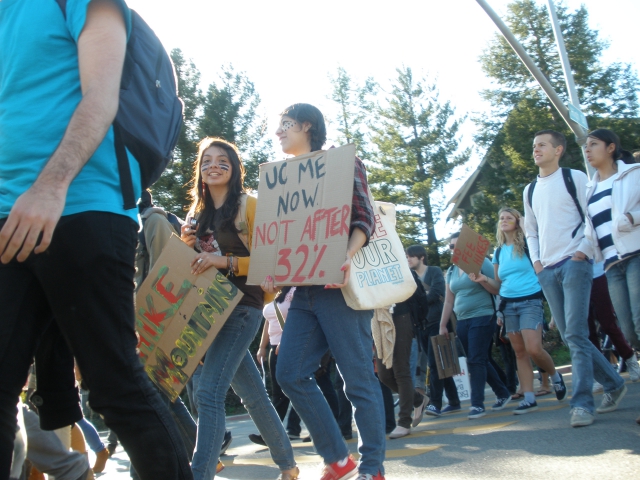 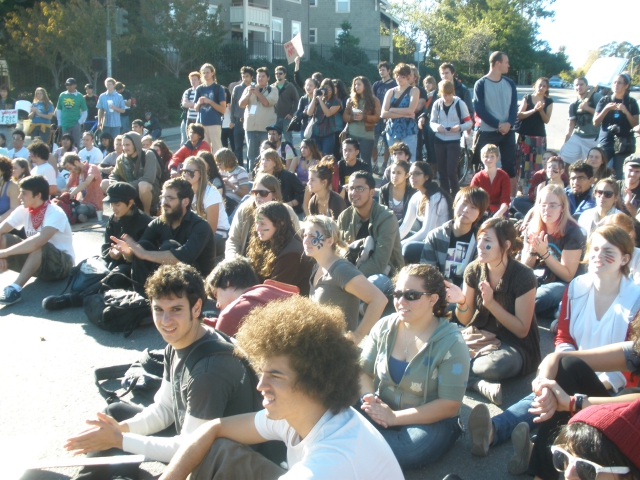 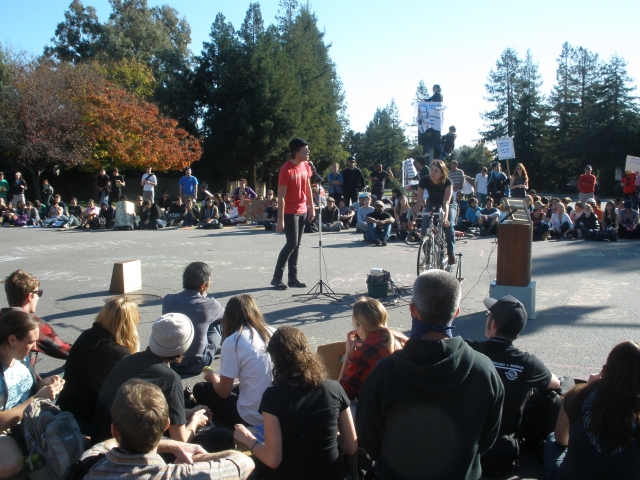 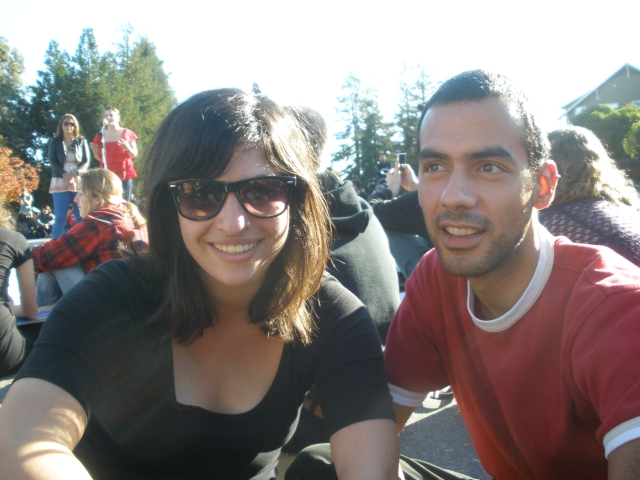 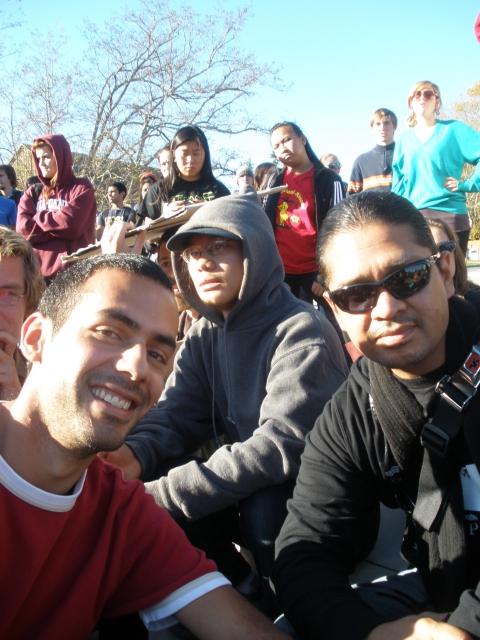 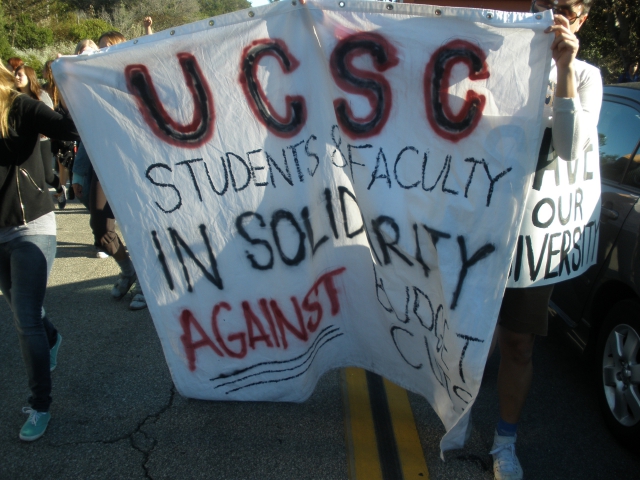 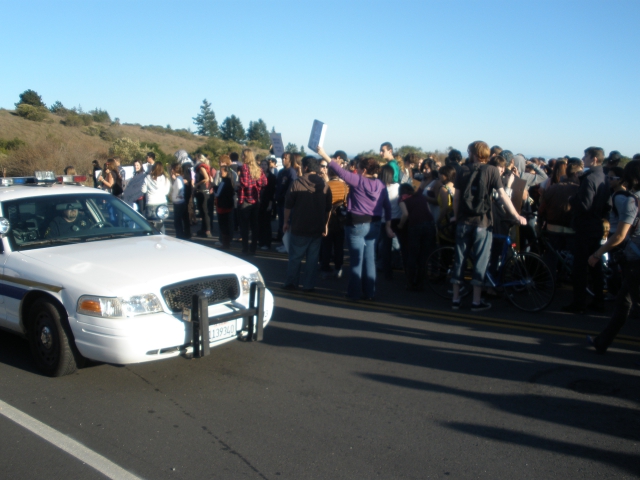 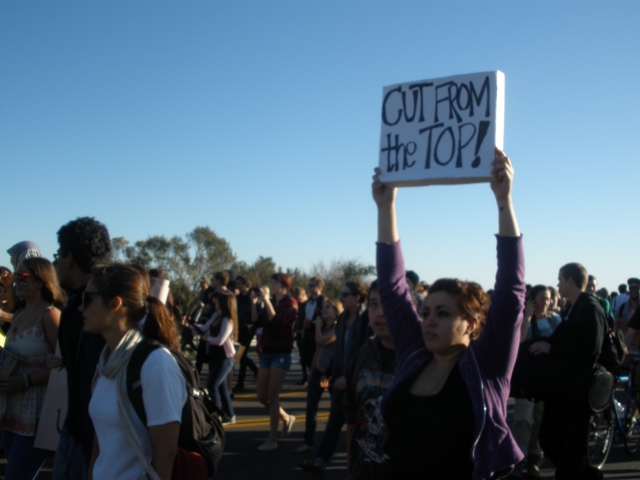 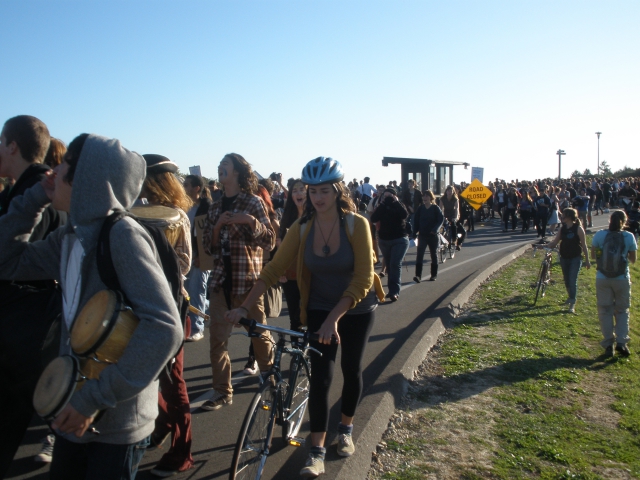 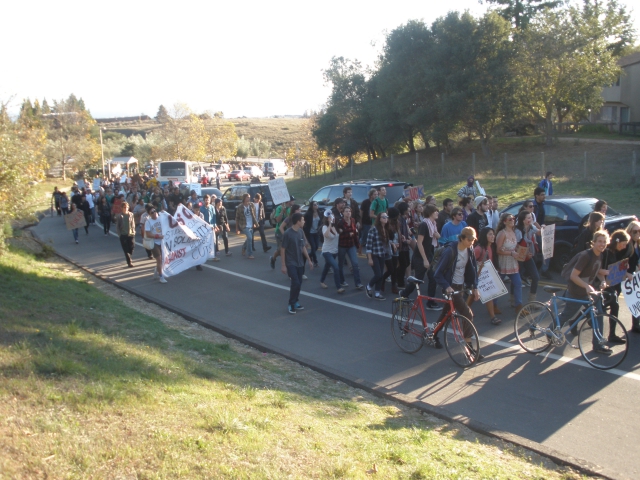 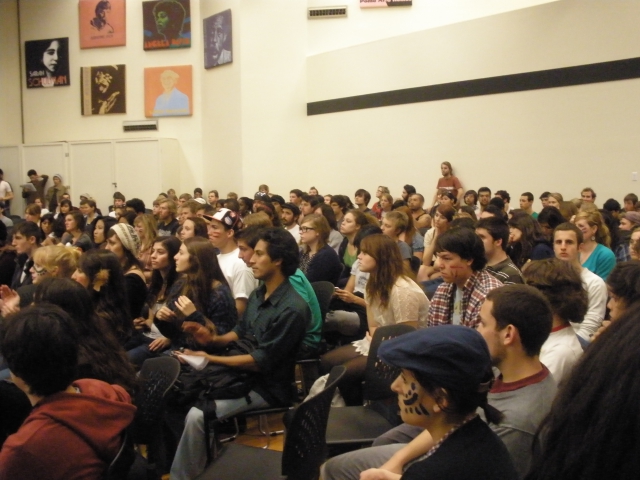 §You have lost my support
by David
Thursday Nov 19th, 2009 2:28 AM
Responding specifically to the protest at UCSC:

I really wish the police had done something about this.

Protesting the fee increases I understand, but these students blocked access to both daycare centers and Family Student Housing. I was unable to pick up my child in Family Student Housing for over two hours. These students do not care to direct their protests towards those responsible for the situation, and I cannot support their aggressive means.

Blaming the Regents for the terrible position they have been put in doesn't help. We need to fight for funding from outside sources. Fee increases reflect funding loss, not some scheme to limit middle-class access to academia. Furthermore, it is university policy to offer full financial aid coverage to students with family incomes below $70,000/year.

All I see are rich, entitlement-laden any-cause-will-do protesters. Try supporting your family on Undergraduate financial aide without your parents' credit cards for a while. And you don't see me out there protesting.

All staff have been hit with 8%-12% pay cuts, furloughs, etc. Faculty have been lost. Hiring freezes mean that some staff are working multiple positions to keep everything running. Salary freezes on top administrators. Why shouldn't we have to bear any of this fiscal mess? Blame California, blame the governor, blame the 2/3 necessary vote to pass a budget here, but blame the cut in funding. Costs didn't increase by $1bill, funding fell by that.

I hate the situation too, but I'm not going to hurt other students to show how serious I am.

Three or four arrests is all it would take before we would see how strong your convictions are. I saw the "police brutality" at the initial tree-sitters riot. These protesters know nothing about civil disobedience. They're antagonistic, wealthy, and wasting their time here at the university.

Add a Comment
§Solidarity from Texas
by Tex
Thursday Nov 19th, 2009 7:34 AM
Wow, I thought we only had to deal with moralizing elitists down here in the south, but David seems to take the a 32% tuition fee hike like a chump and blame students for their 'sense of entitlement' instead of the poor stewardship of the UC and California Govt and the whack spening priorities of state and federal government. Its a bummer this protest was an inconvenience to you, I hope you come around to supporting collective action to protect assesible education and drop the Reganesce grandstanding.

Solidarity from the University of Houston, keep fighting for affordable education! Make the rich pay!
http://houston.indymedia.org
Add a Comment
§Wake up Tex
by Reality Check
Thursday Nov 19th, 2009 8:33 AM
Don't dis David with polarizing or derogatory terms like "elitist" just because he has a differing opinion than you on the selected tactics or effectiveness of the protest. That's a cheap shot and it only serves to lessen your credibility, not his.

The man clearly states that he's self-supported, working to get by at the U, and supporting children while doing so. He specifically decries the antics of elitists acting like radicals.

Maybe that description fits you and that's why the comment stung? In any case, I suggest you read what he said, not what you want to think he said.
Add a Comment
§Tex, did you read what I wrote?
by David
Thursday Nov 19th, 2009 8:39 AM
Seriously, Tex, read my comment again. Slowly. I won't even criticize your spelling and grammar.

I posted the same comment here:
http://www.topix.net/forum/source/santa-cruz-sentinel/TAOMV6NPC7IVAA5B8
at the Santa Cruz Sentinel. Seems most of the people posting on there are from Cali, not “moral elitists” in Texas.

Also, I do loath the way things were handled fiscally. Read my comment. I just object to how these other students are going about protesting it. Their protest does not draw attention the attention of those who are unfamiliar with it, just impedes those who are already acutely so.

Protest in Washington, protest in Sacramento, protest in LA. Protest those who you think mismanaged the money.

- one apathetic about the whole situation (protests, fee hikes, etc)
Add a Comment
§Thinking about this
by David
Thursday Nov 19th, 2009 9:26 AM
I never thought anyone was in any danger. I would have parked the car or driven on the shoulder/forced my way through if I thought that. Also, my last comment was more argumentative than necessary.

I'm interested in what people really think we should do though. And I'm not looking for back and forth bickering. I'm wondering how we can fix this.

I do not think the problem can be handled by cutting only from the top. At a certain point, you cut your head off. I would concede that a bit more can be cut out of admin and staff, but I do not think it will even approach the shortfall cut out by the California government. I think that for the student fee situation to get better, the California fiscal state needs to get better.

One of my ideas, and please realize I'm not an econ major, would be to offload MediCal onto whatever comes out of the healthcare debate in Washington DC. A "bailout" doesn't work because Cali's credit rating is junk status, second from the bottom (only to Louisiana), and the bailouts were loans not gifts. Many of them have been repaid.

My only major thought about Federal funding is a question about what level of regulation/oversight will that create in our university...
Add a Comment
§Problem with Medi-cal $$
by fyi
Thursday Nov 19th, 2009 11:33 AM
Its great your thinking of options. But taking from medicaid simply wont work.

As my Grandpa used to say, "That dog don't hunt."

The problem with using funding from Medi-cal, California's Medicaid, is both proposed health care options , the one passed by the house and the Reid Bill, inject tax payer money into Medicaid, not out. Oh joy for California.
"Massive Expansion of Medicaid and New Taxpayer-Funded Subsidies. Both the House and Senate would dramatically expand eligibility for Medicaid and extend generous taxpayer-funded subsidies to the middle class."

So there will be no removal of medicaid in Ca. for money to be taken from.