Another police fishing expedition has been fought successfully over the course of the past year by one of the Indymedia.us server admins and the good folks at the Electronic Frontier Foundation (EFF), largely in secret due to dodgy gag orders (which actually didn't have any real legal standing to begin with).

EFF's brief on the incident: http://www.eff.org/wp/anatomy-bogus-subpoena-indymedia Note the emphasis on best practices: never log IP addresses. All online service providers should pay attention to this and make sure they are protecting themselves in a similar fashion. 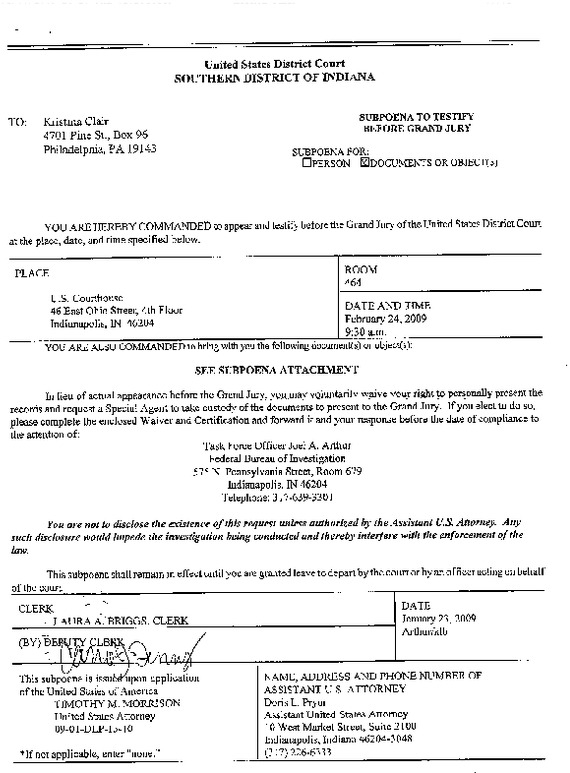 Can the U.S. government secretly subpoena the IP address of every visitor to a political website? No, but that didn't stop it from trying.

In a report released today, EFF Senior Staff Attorney Kevin Bankston tells the story of a bogus federal subpoena issued to independent news site Indymedia.us, and how the site fought back with EFF’s help. Declan McCullagh at CBSNews.com also has the story.

The report describes how, earlier this year, U.S. attorneys issued a federal grand jury subpoena to Indymedia.us administrator Kristina Clair demanding “all IP traffic to and from www.indymedia.us" for a particular date, potentially identifying every person who visited any news story on the Indymedia site. As the report explains, this overbroad demand for internet records not only violated federal privacy law but also violated Clair’s First Amendment rights, by ordering her not to disclose the existence of the subpoena without a U.S. attorney’s permission.

Because Indymedia follows EFF’s Best Practices for Online Service Providers and does not keep historical IP logs, there was no information for Indymedia to hand over, and the government withdrew the subpoena. However, as the report describes, that wasn’t the end of the tale: Ms. Clair wanted EFF to be able to tell the story of the subpoena and shine a light on the government’s illegal demand, yet the subpoena ordered silence. Under pressure from EFF, the government admitted that the subpoena’s gag order had no legal basis, and ultimately chose not to go to court to try to force Ms. Clair’s silence despite earlier threats to do so.

This story is an an important example of how government abuses breed in secrecy, and an argument for Congress to step in and require meaningful reporting about how the government uses its surveillance authorities. How often does the government attempt such illegal fishing expeditions through internet data? How many online service providers have received similarly bogus demands, and handed over how much data, violating how many internet users’ privacy? How many of those subpoena recipients have been intimidated into silence by unconstitutional gag orders?

We don’t know. And until Congress exerts stronger oversight, we can’t know, except in those occasional instances where a brave online service provider steps up, pushes back, and tells the world. We encourage other online service providers to follow the example of Indymedia.us and Kristina Clair by standing up for their users' rights when the government secretly overreaches. If you're an ISP, a web host, an email provider, an app developer, a Web 2.0 start-up or any other kind of online service provider and you receive a government demand for your users' data, please call a lawyer. If you don't have a lawyer, call EFF.

http://www.eff.org/wp/anatomy-bogus-subpoe...
§another interview with Indymedia sysadmin Kristina Clair
by / Wednesday Nov 11th, 2009 2:57 PM
http://geekfeminism.org/2009/11/10/interview-with-indymedia-sys-admin-kristina-clair/
Add Your Comments
LATEST COMMENTS ABOUT THIS ARTICLE
Listed below are the latest comments about this post.
These comments are submitted anonymously by website visitors.