Add an Event
Newswire
Calendar
Features
Home
Donate
From the Open-Publishing Calendar
From the Open-Publishing Newswire
Indybay Feature
Publish to Newswire
Add an Event
Related Categories: Palestine | International
Celebrate and support the formation of popular resistance in Krayot! part 2
by MC
Friday Nov 6th, 2009 11:29 PM
On Friday, November the 6, hundreds of members of the village of Karyut came together to protest the Israelis occupation and settlements and to move a roadblock put up by the Israeli Occupation Forces. Defying the Israeli military (who declared illegally the area a “close military zone”) and the local PA municipality and mayor (who did not support in any way this action) the protesters represented a new wave of resistance in Karyut that does not obey the Palestinian or the Israeli bureaucracy.
The road block is located on the only way to get to freeway 60. Palestinians from the Karyut area have to use side roads and are forced to drive for hours longer to get to work or visit family. This is one way that the Israeli military creates Jewish only roads and a system of apartheid. 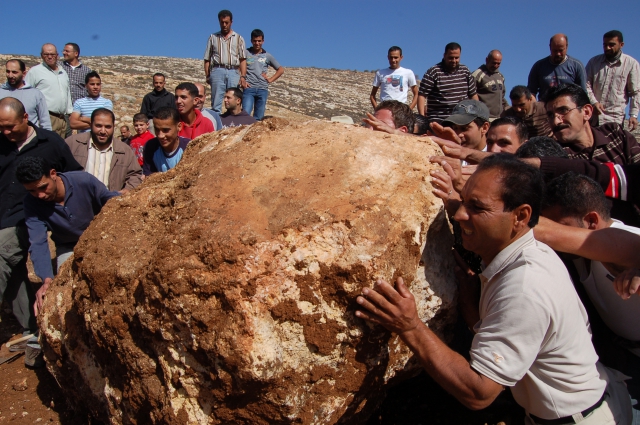 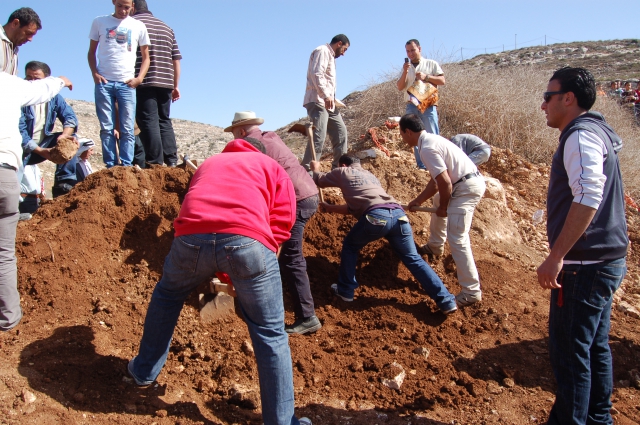 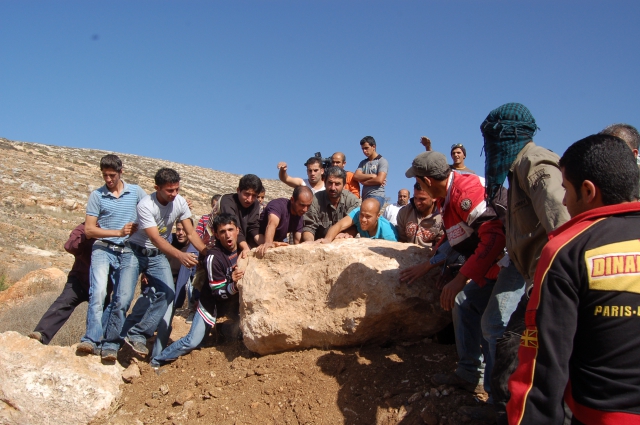 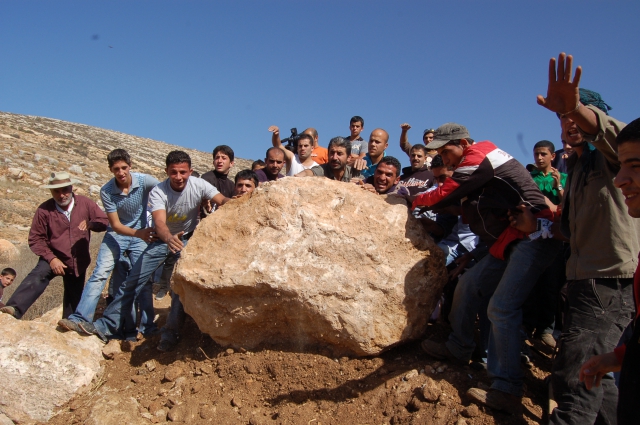 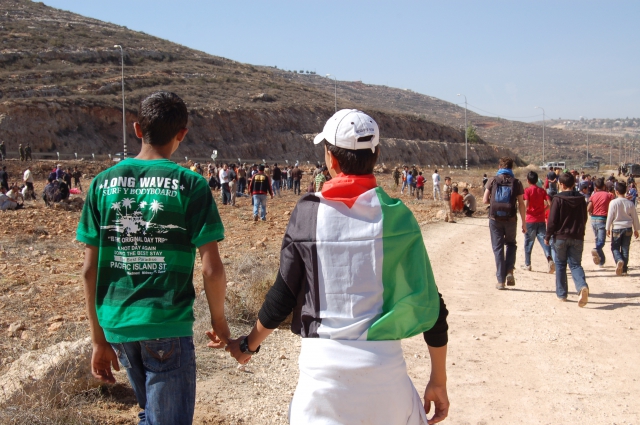 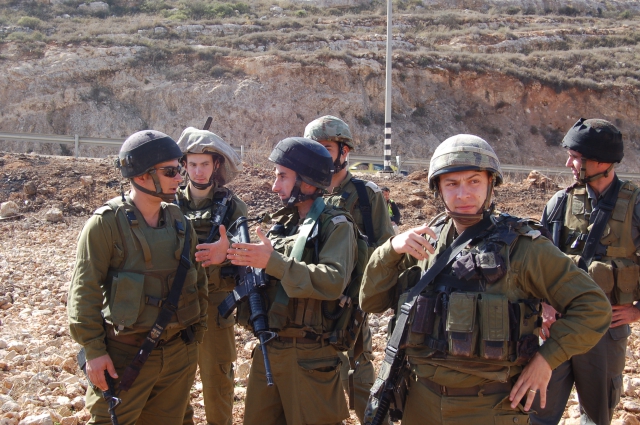 original image (3008x2000)
soldier 1: “I don’t understand why they are not trying to get this roadblock moved legally?” soldier 2:” yeah, they can just appeal to the military civilian authority”.
The military rarely grants premising to Palestinians to live a normal life, and why would people form Karyut need to have permission from the occupation forces for the right to get to work or visit family?

I found the following conversation also interesting.
commander on phone:” where are the forces? We might need more people. In Ni’lin? goddammit”. 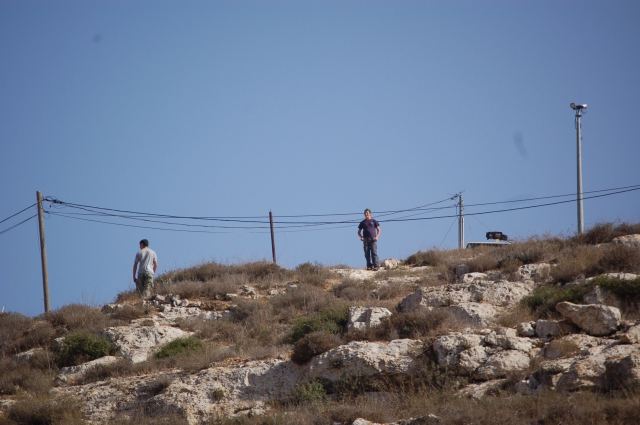 original image (3008x2000)
Settlers who surprisingly can resist the exposure to sunlight (i always carry with me some holy water just to be on the safe side) gather at the top of a hill above us. They come from the settlement of Shavot Rachel, the one that Yaakov Teitel lived in. enough has been said about how Teitel could have still be free if it wasn't for targeting Jews. Indeed, the only difference between Teitel and the Israeli military was in Teitel actions against Jewish Israelis.
Settlers from Shvot Rachel have been confiscating land from members of Karyut for years, they also harras and attack Palestinian farmers regularly.
§roadblock dismantled
by MC Friday Nov 6th, 2009 11:29 PM 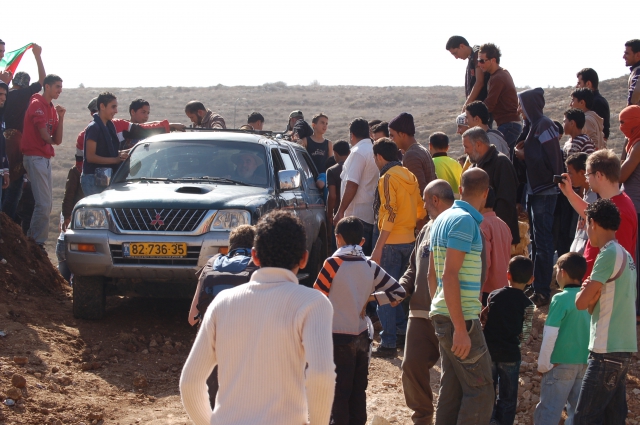 original image (3008x2000)
the roadblock is dismantled and the first car of an Israeli activists drives through.
§driving while leftists
by MC Friday Nov 6th, 2009 11:29 PM 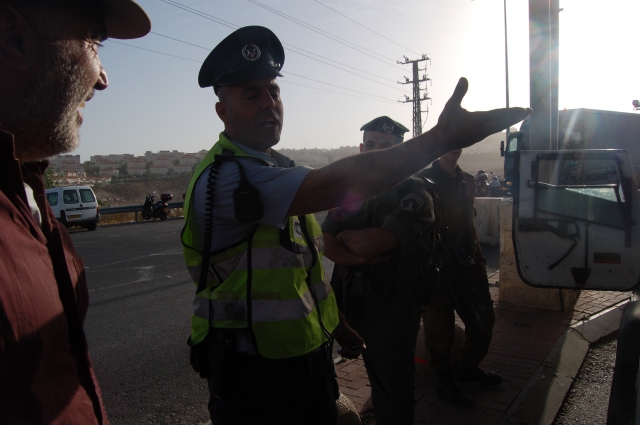 original image (3008x2000)
On our way home we are stooped at a checkpoint by a cop who recognizes us from the demo in Karyut. He demands to search us (he only search my bag at the end) and gives us a ticket for not wearing a safety belt. while waiting at the checkpoint, armed thugs from security companies and soldiers yell at us. Israel who has been privatizing its checkpoints has been hiring privet security companies to do its dirty work of monitoring and harassing Palestinians at checkpoints.
Add Your Comments
Support Independent Media
We are 100% volunteer and depend on your participation to sustain our efforts!