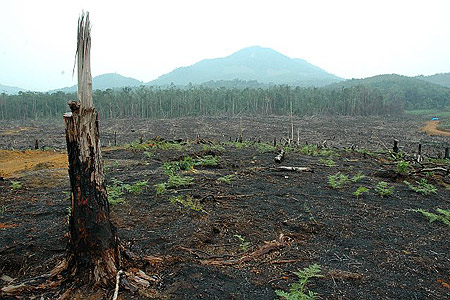 Photo: Destruction of Rainforest in Indonesia for Palm Oil Plantation

At the end of treaty negotiations in Bangkok on 8 October the European Union blocked language to prevent conversion of natural forests to plantations. Without the safeguard, industrial-scale logging and replacement of tropical forests with pulp or palm oil plantations could be funded by money intended to help developing countries reduce the 25 percent of greenhouse gas emissions from deforestation, forest degradation and peatland destruction.

"The EU position is a disgrace," said Sean Cadman of The Wilderness Society. "If at its core REDD is not about funding the protection of intact natural forests, everyone needs to ask what on Earth we are doing here. We cannot possibly prevent dangerous climate change without these forests. "

The 2007 Bali Action Plan called for: "Policy approaches and positive incentives on issues relating to reducing emissions from deforestation and forest degradation in developing countries...," known as REDD.

"There is little evidence that industrial logging has resulted in development opportunities for forest-rich nations," said Laura Furones of Global Witness. "Most countries who will benefit from REDD have poor legal frameworks and weak enforcement, so REDD without safeguards will mean revenue lining the pockets of loggers and the corrupt political elite."

Last minute negotiations over the final text for the proposed treaty resume in Barcelona on Monday and representatives from Humane Society International and The Wilderness Society are attending to rescue the text on rainforests from a global disaster.

"Concerns abound that the Copenhagen treaty will allow carbon credits to subsidise the forestry industry to open up intact rainforests to new logging operations or, even worse, to convert natural rainforests to palm oil plantations", said HSI's Nicola Beynon. "This would spell disaster for climate change and rainforest species like the orangutan".

"Logging rainforests, clearing and converting them to plantations results in enormous carbon emissions. It is crazy for governments to be considering subsidies intended to address climate change for these activities", said Peg Putt from TWS. "Yet this is exactly what the current treaty text for Copenhagen proposes to do".

Australia's Carbon Pollution Reduction Scheme will allow Australian companies to offset all their domestic pollution by purchasing international carbon credits such as those from rainforest nations. "As it plans to be a major beneficiary of rainforest credits, the Australian Government has a huge responsibility in Barcelona next week to ensure those credits will deliver genuine rainforest protection and emissions reduction", said Ms Beynon.

Dr Pep Canadell, from the Global Carbon Project and CSIRO Marine and Atmospheric Research, said in the journal Science two years ago that tropical deforestation releases 1.5 billion tonnes of carbon each year into the atmosphere.

"Deforestation in the tropics accounts for nearly 20 per cent of carbon emissions due to human activities," Dr Canadell said "This will release an estimated 87 to 130 billion tonnes of carbon by 2100, which is greater than the amount of carbon that would be released by 13 years of global fossil fuel combustion. So maintaining forests as carbon sinks will make a significant contribution to stabilising atmospheric greenhouse gas concentrations."

"The new body of information shows considerable value in preserving tropical forests such as those in the Amazon and Indonesia as carbon sinks, that they do not release the carbon back into the atmosphere as has been suggested," said Dr Canadell.

Temperate old growth forests were recently found to be even more efficient in locking up carbon than tropical forests. "This research demonstrates how important it is for the federal government to now take seriously the carbon stored in our remaining unlogged native forests," Virginia Young, National Strategic Campaigns Coordinator at The Wilderness Society said.

The climate treaty is set to be finalised in Copenhagen in December. HSI and TWS are founding members of the Ecosystems Climate Alliance, a coalition of NGOs working at the climate negotiations to ensure the deal on forests secures their protection and the rights of indigenous peoples and that it is free from the rorts and perverse outcomes that have typified the treatment of forests in the Kyoto Protocol.