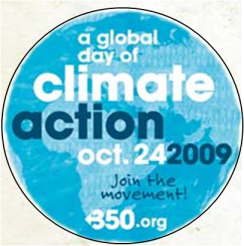 * SANTA CRUZ JOINS MOST WIDESPREAD DAY OF CLIMATE ACTION IN HISTORY, 3,712+ EVENTS AROUND THE WORLD

On October 24, people and organizations from around Santa Cruz will gather for several events and rally as part of the largest global day of climate action ever. The Day —one of more than 3,712 rallies in more than 162 nations—is coordinated by 350.org to urge world leaders to take fast and effective action on global warming. This is the first global campaign ever organized around a scientific data point: 350 parts per million CO2 is the safe upper limit for the atmosphere to avoid run-away climate change, according to the latest scientific data. We are now at 389 ppm and rising.

In Santa Cruz, the County has issued a Proclamation for the Day. (http://bit.ly/Oct24_SCC) The main coordinating body is the "Santa Cruz 350 Coalition Initiative", a group of citizens and community groups working for a Day of "Unity, Awareness and Climate Action in Santa Cruz." Under this arrangement, various independent groups will organize their own activities, with a common rally in mid-afternoon.


pre-event:
THURSDAY OCTOBER 22:
The Gateway Private School in Santa Cruz has been working on
writing 350 letters to President Obama from students, parents, teachers
and staff. They are asking for a climate treaty in Copenhagen that is Fair,
Ambitious and Binding. Photos & video to be posted.
(Gateway School, Private event)

Hoisting The Sails to 350: An Oceanic Plea for Greenhouse Gas Reduction. http://www.350.org/node/8842
Three boats will set sail with banners displaying the number 350, between Santa Cruz Harbor and The West Cliff Lighthouse, view from end of Wharf.
(Greg Cotten and a City of Santa Cruz: Climate Action Team.)


Simultaneously, people in every corner of the world will be taking similar action, from climbers with 350 banners high on the melting slopes of Mount Everest to government officials in the Maldive Islands holding an underwater cabinet meeting to demand action on climate change before their nation disappears.


ADDITIONAL INFORMATION:
Photos from the event will be available
Photos from events happening all over the world will be available for free use at: http://350.org/media
For more information on the global 350 campaign, please visit http://www.350.org or contact Cosa Bullock in New York, cbullock [at] mrss.com
###

ABOUT 350.ORG
Founded by author and environmentalist Bill McKibben, 350.org is the first large-scale grassroots global campaign against climate change. Its supporters include leading scientists, the governments of 89 countries, and a huge variety of environmental, health, development and religious NGOs. All agree that current atmospheric levels of co2—390 parts per million—are causing damage to the planet and to its most vulnerable people, and that government action at the Copenhagen climate conference is required to bring the earth’s carbon level swiftly down.
§Climate Action Day Proclamation
by 350 Santa Cruz Tuesday Oct 20th, 2009 1:15 PM 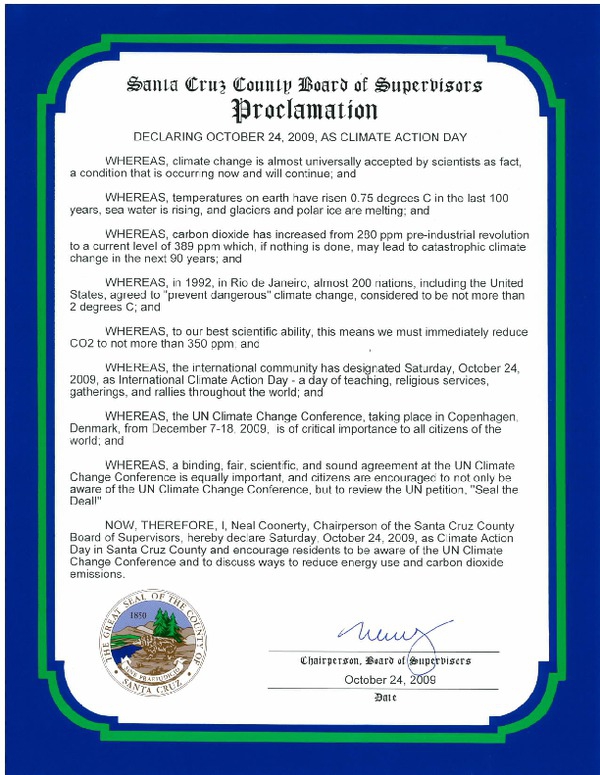 Download PDF (247.8KB)
Add Your Comments
LATEST COMMENTS ABOUT THIS ARTICLE
Listed below are the latest comments about this post.
These comments are submitted anonymously by website visitors.